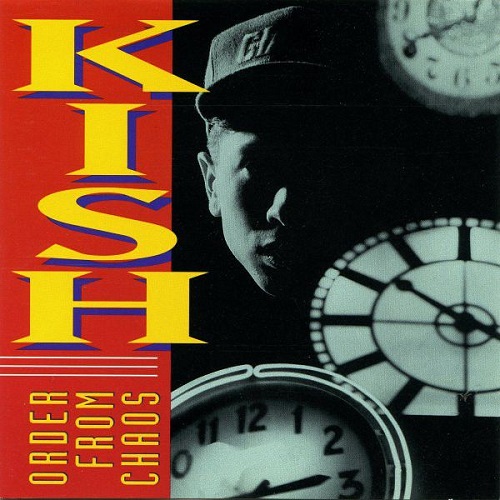 High up my personal playlist for 2013 you will find a Biz Markie cover from three veteran Toronto artists, “Vapors 2012” by Dan-e-o, Big Kish and Maestro Fresh Wes. The collaboration was also included in Dan-e-o’s “Immortal” EP as “Worldwide Vapors,” albeit not to the beat of the Biz original. It was over the familiar James Brown loop that I sort of discovered Kish, who sported a cool, confident flow from another time. Coincidentally I came upon his first album the other day, 1991’s “Order From Chaos.” His name stylized in capital letters, KISH had the good fortune of being produced by First Offence Productions, the same team who had orchestrated the success of Canadian breakthrough artist Maestro Fresh-Wes two years before.

My hope of discovering a thoroughbred MC’s slamming debut from the days of yore wasn’t answered. The album’s lead single was “I Rhyme the World in 80 Days,” a novelty tune that finds itself in a no-man’s land between dance, pop and rap. Despite female house vocals on the hook, it’s not really hip-house, just a dancey affair suffering from a flat sound and a loose pace, lacking the clarity and precision of good dance music. Lyrically KISH takes the listener, as the wordplay of the title suggests, around the world in his rhymes. He finds romance in France and gets into it with the KGB as he invades the Soviet Union (virtually months before it ceased to exist) on a rap battling mission, before finally finding spiritual refuge in “the motherland.” “Yo KISH, you went to Africa?” a voice interjects, to which he replies, “Nah – Japan.” Indeed Andrew Kishino must have been one of the first North American rappers possessing Asian features, inherited from one side of the family tree. He pursues the theme in the track that immediately follows “I Rhyme the World in 80 Days,” “Shogun.”

Adding keys and pianos to a Tom Scott sampling staple, “Shogun” qualifies as early ’90s jazz rap, especially taking into account the deceptively purposeful but essentially disjointed abstract lyricism that doesn’t amount to much in the end, not the least any image of a legendary warrior. “Strict Economics” is the exact opposite, its shocking realism related in a matter-of-fact tone not uncommon for the era. Unfortunately the musical interpretation is nothing short of boring, so that it lacks the urgency of comparable rap songs from those years. Another unfavorable comparison is evoked by “Jim Class.” Although surprisingly naughty, this Jimbrowski workout is simply no “Talk Like Sex.”

Meanwhile “Gettin’ the Mood Right” fits the Big Daddy Kane and Rakim mold of emceeing, a rap workshop that explains what the rapper sets out to do in the song, complete with the briefest of references to mythology and science. The beat remarkably begins with ’80s B-Boy Records drums, but after a female background singer starts repeating the title, the path is clear for a smoove groove that merits a few headnods. “She’s a Flirt (Let’s Do It)” is another example of the album’s, pardon the pun, flirty incorporation of samples. A “Do It (‘Til You’re Satisfied)” drum loop is combined with other bits and pieces from sampling history, eventually making way for a club concoction (including female hook) that tops “I Rhyme the World in 80 Days” with keener dance sensibilities. Appropriately, the song is situated in night life as KISH gets back at a notorious tease.

While label needs were fulfilled with the singles “I Rhyme the World in 80 Days” and “She’s a Flirt,” KISH worked on his rap reputation on several album cuts, complete with attempts to distance himself from opportunistic tendencies in the music industry. On “It Runs in the Family” he refuses to bite “off a played out break like George Michael” (he probably means “Freedom! ’90”) and makes digs at Vanilla Ice (culminating in “That ain’t no way to make a living / You’re leapin’ around like Richard Simmons”). “What Has to Be Done” is an artistic manifesto signed with blood, sweat and tears. Or less melodramatically put, it’s an early example of a rapper making a personal connection between rap music’s outcast role and his own outsider status within hip-hop culture:

“I was a child that was a part of the street style
Bricks and concrete a part of the profile
Never rock ‘n rollin’, I was rollin’ on the rhythm within
But I was trapped in a prison of skin
Cause no one knew why I grew as a poetical
Expressin’ myself in a rhyme theoretical
So I got dissed just because of my taste for this
Other kids said my life would be wasted
If I hung around with criminals wastin’ my time
Well, you pick your friends, and I pick mine
[…]
I knew one day if I slaved I would make it
And no one could stop it, jock it or take it
Auditions I’m dissed at, they wouldn’t listen to it
Sayin’, ‘Rap is irrelevant, no level of music to it’
Full of a rage for the stage but I’m silent
It was everything I had just to stop the violence
I put it behind me, so it wouldn’t remind me
And then you wouldn’t find me without a pen beside me
Pennin’ a lyric, puttin’ more words together
To poetics to mix to a beat, I got better at it
I was an addict for rhymes, I had to have it all
And if my throat went raw I took Bradosol
It’s man versus himself – and I’m winnin’
But I always remembered the roots and the beginning”

The Shogun tries to live up to these noble intentions but faces two major challenges – the compromising sound design and his own technical shortcomings. Not only is there a bubble gum feel to the music that takes the edge off potentially potent beats, the tracks are often jeopardized by arbitrary musical choices. “What Has to Be Done” would be a sparse set-up in tune with the subject matter but is interrupted by an odd Otis Redding sample that was put to much better use a year later by Solid Scheme for Das EFX’ “Dum-Dums.” Although probably intended that way, the plodding beat for “Trackapella” makes the posse cut even more tedious, which may feature Fresh-Wes and female rapper D-Shan, but also two producers and one manager who don’t really belong on the mic. KISH himself gets exposed – if not embarrassed – opposite guest K-4ce, who may be a one-trick pony (he does that pop culture punchline thing like on Maestro’s “VIP’s Only” from the same year) but makes KISH come off like a beginner.

Despite scratches and Rakim samples, despite a combative mentality and some solid song concepts, “Order From Chaos” suffers from obvious growing pains. As Canadian hip-hop’s first major label release and an early outing by an MC with a different color of skin it can nevertheless be considered as something of a milestone. Andrew Kishino’s voice, too lightweight at the time, would actually become his bread and butter at the turn of the millennium when he got into voice acting. He has since voiced characters for a substantial number of video games and television series, so while you may not have been there to witness his early rapping endeavors, there’s a good chance you heard him while playing ‘Resident Evil: Operation Raccoon City’ or ‘Batman: Arkham Origins’ or while watching ‘Star Wars: The Clone Wars’ or ‘From G’s to Gents’. In the history of rap music there have been many different second careers, but there’s an especially beautiful logic to that of Big Kish.