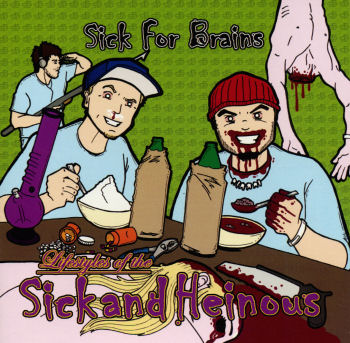 Sick For Brains :: Lifestyles of the Sick and Heinous

If you’re not a fan of Necro or any of the over-the-top violence and sex that early Eminem dabbled with then you can discount this review from here on in. Sick for Brains look, sound and feel like Necro – minus the solid production. You’re probably wondering why I’d bother reviewing this record given that I don’t particularly enjoy that style of hip hop, and having seen Necro live (oddly, his set was just before Talib Kweli’s), genuinely find some of his material unsettling. That’s obviously part of his appeal, yet Sick for Brains rarely shock you; “Lifestyles of the Sick and Heinous” is a mile away from the vicious, black humour of Big L’s near-classic “Lifestylez Ov Da Poor & Dangerous”. What Sick for Brains do borrow from Big L is the clownish, excessive behaviour of Mr Flamboyant’s earlier (and scruffier) work which can be found on the “Return of the Devil’s Son” CD.

Despite the Necro similarities, there are songs that regular (sane) listeners can feel apathetic towards. There’s some verses on “Writin’ Raw Shit” that operate at a different tier to the rest of the album, presumably because they enlisted Copywrite to drop a guest verse and didn’t want to be upstaged. If there ever was a hit single from this album, it would be the uncomfortable “I’m Screwin’ Your Daughter”, which treads dangerously close to being the first (and hopefully only) hip hop anthem for paedophiles. It’s not supposed to be, but the constant references to childhood help ensure this song is genuinely just sick. Lines like “your baby’s a crazy ho” and “she doesn’t play with dolls no more, it’s dick she loves” may not be intentionally disturbing, but do prevent this from being a song you’d listen to repeatedly – the hook, production and idea is all there but it’s not quite the sum of its parts.

Emcees Klepto and Twigz are capable rhyme slingers, but their presence often veers between imposing and corny, squeaky and coarse; and more often than not will impress, and then embarrass. What I mean by this is that the guys are genuinely aware of how to craft bars, but after tying together some nice use of assonance in their schemes, will throw a real David Brent of a line in to balls it up. Thematically, topics don’t stray far from drug taking (“I’m on Them Right Now”, “I’m High, I’m Blowed”), misogyny (“Leave That Bitch At Home”, “Love It”) and a constant need to be puerile (every other song). There are some moments that can shock, but for the majority of “Lifestyles of the Sick and Heinous” the profanity is just childish – for every c-word, there is a sprinkling of infantile words such as ‘goo’, ‘pee stains’ and ‘vagina’. It’s like listening to some teenagers dabbling with rap in their bedrooms at the weekend and still finding curse words naughty.

Production is handled throughout by DJ Denny’s and it’s largely underwhelming. There is an element of variety but ultimately, each instrumental sounds decidedly lo-fi whether it be the imposing “It’s A Murder” or the just plain wack “Leave That Bitch At Home”. It’s a shame, as there is a tendency for depraved emcees to utilise strong production that can help the filth become bearable. That’s not to say that “Lifestyles of the Sick and Heinous” is a lost cause, there are three or four keepers but the album is not exactly as the press release implies: “18 tracks of hilariously psychotic, brain-melting entertainment”. The only guarantee is the brain-melting bit, as this is liable to kill more brain cells than a Soulja Boy freestyle. I’m all for adding humour, particularly if it’s juvenile, as long as it is genuinely entertaining. Redman, Ludacris, Sean Price, Celph Titled; the list of emcees that can raise a smile or even a chuckle is sizable enough, but always there to be added to – hip hop is a deadly serious genre after all. The problem with Sick for Brains is that they just aren’t naturally funny; their lyrics are technically decent but remain cringe worthy throughout. The album is under produced and as track seventeen says, “they say I’m no good, fuck ’em!”

I suppose it’s fuck me then.

Sick For Brains :: Lifestyles of the Sick and Heinous
3Poor
Music3
Lyrics3