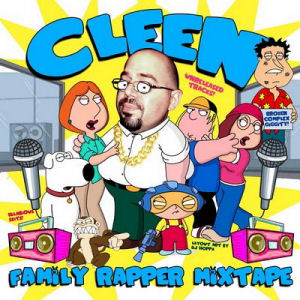 If nothing else, Lancaster, California rapper Cleen can probably say that he’s done something that hasn’t been done in rap music before. The cover sheet to the industrial CD-R upon which “Cleen: Family Rapper Mixtape” is scribbled in what is ostensibly the rapper’s own handwriting reads, “This mixtape is a collection of unreleased tracks I’ve made from 2007 to 2009, mixed in with snippets from my favorite cartoon ‘Family Guy.'” Who said hip hop was dead?

Cleen is a normal guy with normal ideas and experiences; it’s easy to relate to most of his sentiments, even if they aren’t especially riveting. He has an unassuming, conversational delivery and a self-deprecating sense of humor that he frequently employs as he chronicles the trials and tribulations of the everyman. This type of sarcastic rap has been done before to great successâ€”rappers such as Del tha Funkee Homosapien, Devin the Dude, and J-Zone presented funny paradoxes between their surprisingly regular selves and the archetypal rap star lifestyle. Cleen is a good writer, but what he lacks in comparison to those rappers is charisma; he’s hopelessly monotonous and most of the time his flow is so off-kilter that he doesn’t seem to be rapping so much as talking. Guests are unimpressive and production supplied by DJ Hoppa, Offbeat, Elephant Gerald, SHK THT, and Cleen himself is extremely simple, even simplistic. The beats are deathly slow, instrumentally sparse, and sonically vapid, and even though his verses are well-constructed, it’s hard to get past the fact that most of the time he’s just whining.

After an intro of Griffin family bytes, Cleen opens with the Morb One duet “Ice Cream Cone,” where the two rappers rap about such diverse subjects as being white in a black-dominated rap game and having MySpace requests denied. On “Wishing Well” he discusses his own troubles and insecurities and also offers some social commentary. “Scatter Brain” is an apology to fans whose names Cleen forgets at shows, and Offbeat provides a pleasant, appropriate musical backdrop for “Sunny Day in California,” which is pure, simple feel-good listening.

Cleen is often plagued by a lack of concepts here. Although he often references his home town, like on “American Idol” and “Cadillac Desert Revisited,” he doesn’t have much to say about it besides that it’s an unlikely home for a rapper. It’s not fun to listen to him grumble eitherâ€”his disdain for mainstream rappers on “Must Be Nice” sounds like pure haterade and his rejection of the rock star lifestyle on “City of Moths” is unconvincing. Regardless of whether or not his sentiments hold weight, nobody likes to hear someone complain as he does on “Amilli (Cookin’ Soul Remix)”:

“Trugoy, Posdnuos and Maseo
Here’s what I wish I heard when I listened to the radio
Instead what we got is all imposters
Posers posin’ as mobsters
They got my doctor’s daughter hot and bothered
Now these popper-stoppers all I talk to
‘Cause I’m sick of surfin’ MySpace lookin’ for hip hop chicks
That’s my age with no kids that like De La Soul
You ever try that shit homie? It’s impossible”

The posse cuts “Sky Writer” and “Good Morning Sun (LFTB Mix)” breathe some life into the MC. The former features what might be his best verse on the mixtape, but in the latter, he easily outshines his weak company.

Chances are that you will never even have the chance to purchase the “Family Rapper Mixtape” unless you run into Cleen personally, so when I review this sort of material, I consider it my duty to let the readers know if they are really missing out on anything and if they should indeed make the considerable effort to track down such an obscure recording. The answer is this case is a resounding no. Cleen is not an incompetent rapper by any means but the mixtape format does him few favors; hearing his throwaway rhymes over minimalist beats would not inspire a listener to seek out further material. In the past critics have praised Cleen’s honest introspection, but here I found it grumpy and downright bothersome, and that’s when it wasn’t plain boring. He does have some interesting things to say and some interesting ways to say them, but in a genre where hunger is half the battle for undiscovered artists, it doesn’t sound like much effort was put into the “Family Rapper Mixtape.” On the outro to “Must Be Nice,” Cleen ad libs, “If this crosses over, I’m gonna laugh my ass off.” In that case, he doesn’t have much to worry about.