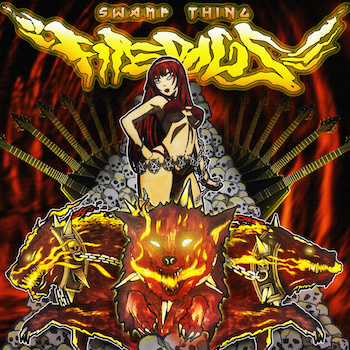 “Creature Feature” introduced the world to Swamp Thing, a hip-hop supergroup from Canada featuring Savilion, Timbuktu and Chokeules. The press release for their latest offering “Firedogs” states that the debut LP was “a glimpse into their warped world” but to a long-time follower of hip-hop or monster movies (let alone both) there was nothing excessively shocking. If anything the album was a tribute to Mystery Science Theater 3000 – a loving laugh at allegedly scary horror or science-fiction films which are only taken seriously by the actors in them. The leading men and women can’t be blamed for the bad dialogue though (blame the script), nor can they be blamed for bad special effects or poor editing choices which linger too long on trivial sequences then emphasize plot developments that apparently occurred off screen! It’s at that point you can only throw up your hands and enjoy the film as a farce instead of taking it as serious cinema.

“Firedogs” finds the focus shifting away from B-movies to A+ rap skills, which makes D-Sisive a natural choice to guest star on opening track “The Altar.” Sayeth D: “Bloodshot syringe, burning where my sperm swim/devil in a blue dress, Lucifer in a turban/heroin and spoiled milk, strummin on guitar strings/tugging on my heart strings, on a park bench.” The Savilion produced “Damages” that follows it is a pleasant throwback to early-to-mid-1990’s hip-hop, combining a smooth melody in the chorus with plucky imitations of it under the verses, stitched together with a simply effective kick drum, snare and hi-hat. It’s deceptive given that it comes off effortless but undoubtedly took long hours to perfect.

The M.O. for Swamp Thing is short but highly effective tracks, with nothing on the 40 minute album clocking in longer than 3:28. There’s very little filler or time wasted on skits, which leaves you on a non-stop roller coaster of hip-hop highs and headlong plunges into a boom bap cavern. The monster movie motif doesn’t completely disappear from the Swamp Thing repertoire though. “Ed Wood” can only be considered a tribute to the kind of “so bad they’re good” monster flicks and sci-fi thrillers of the opening paragraph, but Savilion generates genuine menace on the foreboding “Elephant Man” featuring Ghettosocks. The lyrics of the crew are ideally matched for the edgy and pulse-quickening backdrop:

“Welcome to my humble abode, I’m runnin the show
Chillin in my cellar with my guns and my gold
I think we can assume the entire planet’s doomed
That’s why I turned my whole house into a panic room
Big as Andre the Giant when I wreck this next shit
Just bought a skeleton on CraigsList
Paranoia but it’s under control
Even though the Devil’s trying to take a dump on my soul
Run with the cold breeze, blow it in my dome piece
Voices in my head tellin me to kill my homies…”

There’s an affection for both Wu-Tang Clan and pro wrestling running through the album, including samples of Ol’ Dirty Bastard saying “I’ll fuck you up right now” on “Raw Minded” and references to Iron Sheik’s dreaded camel clutch. That makes an album like “Firedogs” ideally suited to someone with my background, but the only background you really need is an interest in quality hip-hop to enjoy the Swamp Thing steeze. By the time the album wraps on the uptempo “Rise Up” and sleazy 70’s sound of “Reunion” featuring Wordburglar, the album is more like a short prelude that should have been expanded and screened as a full length feature. It’s not disappointing in any respect – it just makes you want more than what they offered here. Keeping your audience coming back though is a good thing. They may laugh at a B-movie and never see another, but for A+ beats and rhymes, you can bring them back repeatedly.