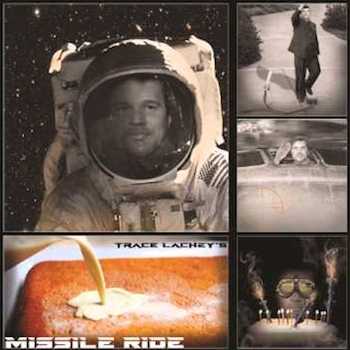 The Triple Playaz tout the fact they received “rave reviewsincluding an 8 out of 10 from RapReviews” in the media blurbs accompanying the “Missile Ride” LP. Although that’s a technically accurate statement it omits the context that writer Alex scored his 8 (for lyrics only) with, which I’m going to include here: “It’s also a lukewarm 8. The Triple Playaz need to trim this by 5-6 tracks and subtract the inane, space-sucking ‘wasteland’ idea.” This is not an attempt to debunk their press kit or accuse them of dissembling in any way so don’t take it as such, but I’d rather be clear up front that we’ve not offered any ringing endorsement of T.P. as the next great thing.

Now that we’ve clarified the situation regarding our views on the Triple Playaz, we can delve into their latest release “Missile Ride” unencumbered. I actually went out of the way to track down the crew when an unfortunate encoding problem made their album unplayable in my system, and they quickly provided a digital copy I could unzip and play on my laptop, so high marks right away for the prompt response. “Missile Ride” is clearly a double entendre for the group, though they do offer a futuristic sounding title track complete with astronaut mission samples to take the theme as far as it can be carried – and it works.

The Triple Playaz have a whimsical sense of humor throughout the majority of their CD, which serves them better than the beats do in many cases. “Makin’ It Big” is an example of a middling track which is raised above its station by the the absurd situation the rap protagonist is placed in – trying to get a internet action from a woman named “Martha Dumptruck.” You can probably guess where it’s going based on the song’s title and her moniker, but I’ll give you a little taste anyway:

“I put in my request and my home address
Then I shut down the computer and I hoped for the best
Soon as I undressed the ground started to shake
Like a salivating dog, my dick got hard
I saw her walking up like Andre the Giant
After this freak show my dick gon’ need realignment
Now how she get her fat pussy through my door?
I bet she pap smear with a 2 by 4
Her legs folded over like elephantiasis
And I bet, she got some bad arthritis…”

Some songs may be suffering from a lack of Beats by Dre or Monster headphones – yet the normal earbuds I rock serve me well enough for 99% of hip-hop albums I receive physically or digitally. I can only conclude that the distortion on songs like “Tulsa” is a mastering problem as opposed to my own sound system, which is a shame given the melody and sample of the hook show major potential. It also doesn’t reconcile with the fact songs like “Pussy Pass” and “Jung and Dumb” come out clean, which suggests that some tracks just didn’t get the extra polish they needed before mastering.

I want to only give the Triple Playaz the gentlest of rebukes here since they don’t do any one thing particularly poorly, but much like the first CD that I received, there are some problems in execution when it comes to the finished product. I think Alex got a good break on their first album when the group was young and hungry and eager to impress, while “Missile Ride” has the feel of artist who now recognize the long road ahead in the rap game, and the relatively low odds of succeeding at an elite level. It’s a lot like the NBA, where you can be decent in high school, even outstanding as a collegian, yet never quite have the skills to even fill in as a bench warmer necessary to dwell amongst the giants. It shouldn’t be that easy to achieve anyway. To get the millions of dollars and the mansion lifestyle you can’t get by on talent alone – you’ve got to cultivate it through tireless hard work and even THEN you still have to network with the right people. It’s all part of the hustle, and for the Triple Playaz, the first part of that hustle has to be stepping their game up.