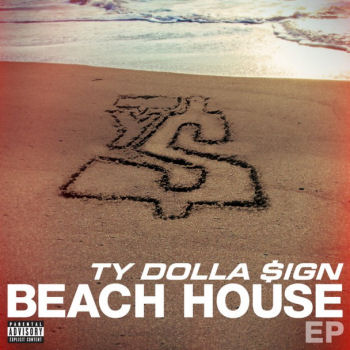 A comparison with T-Pain is inevitable when an artist boasts dreadlocks, Autotune and a nasty habit of referring to all women as bitches. Except T-Pain could craft half-decent songs, and even catchy hits (regardless of your opinion on Autotune); Ty Dolla Sign however has released a real turd of an EP in order to nullify any hype he may have for his debut album, to be released later this year. It’s a real shame because the song “Work” is a decent effort, bolstered by an uplifting vibe that justifies the “Beach House” name that Ty often goes with on his work. Even “Wood & Leather” knocks hard, but Ty’s presence just doesn’t aid proceedings – the Autotune is overdone and lends the song a ‘Robocop doing karaoke’ feel that is disappointing.

Unfortunately, Ty Dolla Sign steers the rest of this beach house into quicksand. Infantile remarks such as “your bitch looks like a booger” help ruin any genuine rhymes from guests. Trey Songz upstages Ty on “Paranoid (Remix)” and even French Montana’s lame homage to Kurupt is vaguely entertaining but there’s some really weak moments here. Awkward pauses on most songs where words should be. Every song being about getting bitches, regardless of whether Ty means it or not, and the fact Ty is never alone is an age-old example of limited ability.

Jay Rock stomps over “Never Be The Same” with his deep tones, a song that’s let down by Ty’s incoherent drivel (“you more sketchier than drawings”?). It’s not just the poor lyrics but the sloppy manner it’s delivered, and it’s a shame, given that D’Mile has cooked up a satisfying chip-tune instrumental. Song writing isn’t Ty Dolla Sign’s strength, with “Familiar” being a repetitive, near-depressing take on what should be a badass statement: basically ‘you know my name, I’m familiar’. Except the hook is repeated so many times it’s now more familiar to me than breathing. It’s not helped by Fredo Santana and Travi$ Scott who supply some absolutely horrid verses – it’s almost purposefully bad. If I hear another line about a woman ‘swallowing their kids’ I think I’ll cry.

“Beach House EP” is cringeworthy, brainless hip hop at its worst. It’s like listening to a lobotomised T-Pain perform an album written by Yo Gotti, without the polished delivery of either. The one redeeming feature is DJ Mustard’s infectious, deceptively simple production. It’s barebones, yet could give genuine talent the perfect platform to weave their magic on – unfortunately Ty Dolla Sign just isn’t the person to deliver ‘magic’.