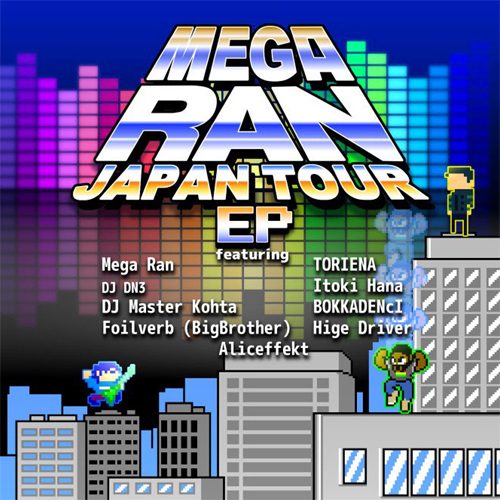 “The moral of this story is stay in your lane and just be a fan
Way too many rappers, not enough fans
I watched CSI a whole bunch of times
But I can’t solve any crime – leave this to the professionals”

Random a/k/a Mega Ran is nothing if not a professional. He’s a pro- in other ways as well: productive, a prodigy, proficient and prolific when it comes to his rapping. There’s every chance that if I bought or downloaded an album a month for the next year straight I would still be way behind on my Ran releases, as he would have dropped a half-dozen or more new ones, but the most professional thing about Ran is that the quality doesn’t suffer no matter how much material he drops.

The “Mega Ran Japan Tour EP” affords both Random and his fandom a little bit of a respite. This July 2013 release was not new material per se, but it was presented in a new way, designed to celebrate his tour of the Land of the Rising Sun. Various producers give their own take on classic Ran tracks that saw him rise to popularity as a gaming inspired emcee. The Master Kohta remix of “Shadowman” is a trip, tripping the light fantastic and chopping the chiptune into a chippy new tune heavy on the bass bottom.

The 26 minute EP ends on the echoing and ambient Aliceeffekt take on “Push” retitled as “Our Forgotten Push.” It’s not a Random song that was known as a gamer or retro track, but thanks to her/his/cis/who knows take on the track it not sounds like part of the electronic pantheon.

Rapping must be like a downhill ski jump to Mega Ran, because no matter how many times he does it, he seems to go higher and further than he did on the last run. Tell Ice Man and Frost Man to lay down a bed of snow man, and just chill as Random proves that even revisiting blasts from the past can take you to new heights.