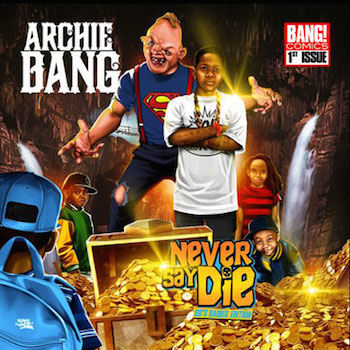 Flatbush rapper Archie Bang is proud to declare himself an “80’s Baby” and the artwork of “Never Say Die Vol. 1” reflects it. Archie places himself squarely in the center of a cinematic gang known as The Goonies

, with the most visually distinctive (and disfigured) member Sloth flanking him. The album’s “Intro” freely samples from the film’s dialogue. For those who grew up seeing it in childhood (as I did) these are welcome callbacks, but if it’s all unfamiliar don’t sweat it too much. The movie airs frequently on cable, is a cheap digital rental if you can’t wait until then, and the album functions equally well regardless of your familiarity with 1980’s pop culture.

Familiarity is if anything a bit of an impediment for Archie Bang. From the outset let’s make it clear there’s nothing whack about this emcee. The diction is clean, the breath control not lacking, the rhymes not poorly written, the delivery not overly monotone or flat. The biggest problem is that Archie Bang sounds like the typical above average New York rapper, which is still above average, but that still means you’ve heard him before. Archie Bang will at some point remind you of at least a half dozen NYC rappers over 52 minutes, and I’d include Saigon among others. He’s not as charismatic nor as lyrically vivid as Sai, but rap anthems like “Summer Time” show his potential:

“Say gotta throw the gloss on candy paint
Been grindin all winter now it’s time to play
Archie see skirts, Archie give chase
Hit the cookout, she gon’ fix me a plate
My hood to yo’ hood, say it ain’t the same
Summer time drama, we ain’t on that page
On some G shit, be best you behave”

There are plenty of enjoyable songs on “Never Say Die” that show the promise and potential that Archie Bang holds – the 12 Keyz produced “Blasphemy” and the harrowing Sargon the Great produced “Rewind” among them.

I’m having a real hard time splitting the atom on this one, which is why I mean the following sentence as both a compliment and criticism – “Never Say Die Vol. 1” is the kind of album I could play as background music while driving around without paying much attention to it. It’s not bad – in fact songs like “Ain’t a Killer” and “The Promise” are perfectly good, and he’s even tapped into the hot flavor of now by getting Troy Ave to appear on his “Hey Luv” remix. There’s absolutely nothing on “Never Say Die” to make me want to turn it off or stop listening, and yet nothing that makes me say it’s a must own either. It’s just there.