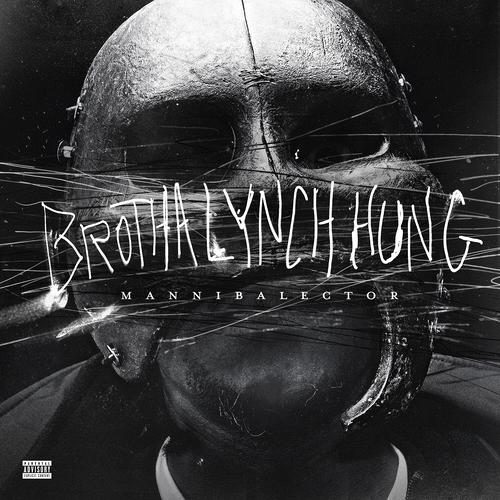 The premise is nothing if not promising. Veteran horrorcore rapper Brotha Lynch Hung relaunches his career by signing with distinctive indie label Strange Music, home of a motley crew of rap acts who if nothing else share the willingness to deal with the mental and physical aspects of human existence. He records a trilogy of albums that thoroughly document his fascination with the entire range between bodily harm and homicide – and those nasty human actions that surpass the imagination of the average person. Everybody’s happy, especially Hung, who continues to make a living setting his actual factual perversion to music. That’s right, on “Dinner and a Movie” (2010), “Coathanga Strangla” (2011) and “Mannibalector” (2013) Lynch is rapper by day, strangler, stabber, slasher, slayer, serial killer by night. It’s so wonderfully obvious that it just might be true.

Everything was in place for a masterpiece, a career-crowning achievement developing over three releases. Lynch and Strange were off to a good start with “Dinner and a Movie,” which not only offered some truly horrific moments and professional musical support but also provided a rare reality check for listeners conditioned towards an uncritical consumption of rap music, a genre that traditionally walks a fine line between truth and fiction but is usually in complete denial about that balancing act.

While “Dinner and a Movie” was an exciting rap album period, “Coathanga Strangla” made no attempt to tie the concept’s loose threads together, plus individual chapters failed to live up to the expectations their titles raised, last but not least due to a bloated supporting cast. Only a spectacular turn of events during “Mannibalector” could have elevated the project from a succession of shocking scenes to a thoroughly scripted, casted, acted, directed and edited piece of work. There are several reasons that call for the cinematographic analogy in this case. One is that the artist himself heavily relies on the narrative element. There are dramatic intermissions, recurring personas, graphic descriptions, chains of events, etc. Another reason is the justification of it all. This is a genre who is often met with diametrically opposed opinions. You will not only find people who are appalled by the things Lynch raps about, there are also those (horror nerds or whatever you want to call them) who may think he’s too tame. Nothing silences such detractors like a bulletproof storyline.

Still “Mannibalector” contains ample hints at Kevin Mann’s ingenuity as a rapper and horror artist. Many of the tracks, whether they are embedded in the context of the trilogy or not, are simply well-done pieces of rap music. It can be a detail that pushes a track over the edge, the buzzing flies in “Sweeney Todd,” the female screams of agony in “Disappeared”, or the short intro to “Stabbed” that sees him follow up the observation “People be saying that I, uhm, talk to dead bodies” with an only brief moment of irritation as he asks: “Are you dead?” It can be the various references to his discography and biography. Or consider the producers who take the challenge to combine horror and hip-hop very seriously, resulting in uniquely orchestrated tracks like “MDK,” “Stabbed,” or “Body on the Floor.” And then you have completely crazy tunes like “Eating You” alongside more rational offerings like “Krocadil,” which combines existential discontent (“I just hate the way things are”) with good ol’ industry bashing (“I fuckin’ hate the music now”).

Lynch Hung’s Strange trilogy isn’t missing a method to its character’s madness, it’s missing methodic narration. And it’s not necessarily the individual songs that would require better storytelling, the songs collectively are in need of a story arc. Since horror is a genre that deals with the unimaginable, why not think outside of the box and hire a professional writer to conceive a scenario for an album concept? BLH is as creative and personal as you’d like any modern age MC to be. Unfortunately his thirst for blood creates one hell of a mess. It’s like allowing Michael, Freddy, Jason, Norman or Hannibal to direct their own flicks. They’d exhibit plenty of expertise when it comes to ending existences, but could they sit still in the director’s chair and finish a film?

For the record, ten years ago this reviewer was very critical of another one of Brotha Lynch Hung’s ambitiously long projects. Since “Lynch By Inch,” however, Mr. Mannibalector has once more sharpened his set of instruments and he carves the word ‘art’ in bold letters across these three releases that really are a completely different beast. If he ever decides to pull the strings on his inner demons in full Poe, King, Hitchcock or Craven mode, he’ll either get his due props or definitely be one of hip-hop’s – and horror’s – most unfairly unsung heroes.