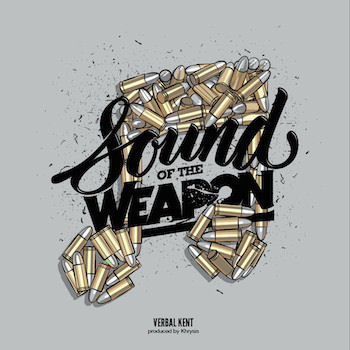 Verbal Kent :: Sound of the Weapon

Some rappers are fortunate enough to be blessed with a voice that was made for hip hop. The likes of Method Man and Nas come to mind as natural rappers that could read the phonebook and still sound fantastic. Others aren’t blessed with that privilege, and despite being a fan of Mello Music Group’s output, I’ve never really found Verbal Kent an emcee that was easy on the ears. Ugly Heroes’ self-titled debut from last year was one of the best rap albums of 2013 and should have come as no surprise but was thanks largely to the phenomenal production from Apollo Brown and the refreshing approach from Red Pill and Verbal Kent when it came to representing your regular Joes. Verbal Kent has returned in 2014 with Khrysis in tow, and “Sound of the Weapon” is arguably an even better example of Kent’s brand of ordinary man rap. That’s rap music from the perspective of a regular guy, rather than a man making rap music that sounds ordinary because frankly, this album is strong throughout and converted this fussy reviewer.

Khrysis was in danger of stagnating after establishing himself as a soul producer in the vein of 9th Wonder (even appearing on Little Brother’s projects), but he has provided Verbal Kent with a fine collection of instrumentals. Tracks like “Hunched over Chess Boards” sound fresh, with crisp drums and rampant pianos aiding Verbal on a track that’s difficult to listen to without defenestrating those in the proximity. Kent delivers an aggressive performance on “Underrated?”, questioning those that say he is underrated with an intensity you can’t help but take seriously – imagining how many songs he hasn’t killed yet is a genuine prospect to ponder, not just the primary line of the hook. Aggression is evident throughout “Sound of the Weapon”, yet always remains passionate rather than intimidating. The style of rapping from Verbal Kent isn’t particularly technical, but his unconventional voice lends itself well to the constant “uh” noises and clear emphasis on each word. It reminds me of Redman’s ability to make the stupidest shit sound incredible, and while Kent is stylistically nothing like Reggie Noble, it’s good company to keep.

This passion is magnified on the tracks with an emotional investment, such as “Sound of the Weapon” with its honest statements such as “sat in my car with tears running down my face” providing some much needed apathy. Little Brother’s soul lives on through 9th Wonder’s remix of the same song, turning a potent track in to a memorable single (assisted by a no-nonsense video). Another gem is “No Excuse”; an uplifting track for anybody feeling depressed about their lives, giving numerous examples of hard-up, disadvantaged people that have worked hard regardless to achieve success. Coupled with Khrysis’ sombre beat and lines such as “Einstein couldn’t read until he was twelve”, it’s a refreshing break from the relentless barrage of rhymes that Verbal Kent bands around over much of the record. The more you listen to this record, the more convincing it sounds. Even a track as monotonous and played out as “Body the Beat” benefits from some downright vicious cutting and scratching from DJ Eclipse (bring back Non Phixion already).

This record does ‘bang’, just as the title suggests. Verbal Kent is hungrier than ever, and rather than spitting battle bars like some of his older records tended to, he opens up more than you’d think. Production is largely on point and there’s a healthy mix of DJs scratching and hooks written by Verbal – in fact the more you listen the harder it is to find flaws. A track with a repetitive beat such as “Sammy Sosa” does what “Special Delivery” did for G-Dep and somehow becomes infectious. Even John Cena would struggle to resist the head-pounding backdrop of “Raponomics”, and it’s hard to see why this won’t be shortlisted when we reach December as one of the candidates for Best Hip Hop Album of 2014. It might not be the complete package that the Ugly Heroes project was (it depends if you like Verbal’s style) but whereas I was once skeptical of listening to Verbal Kent for a whole album (zero guests!) – I’m now convinced and look forward to more music from Verbal Kent, as well as Khrysis.