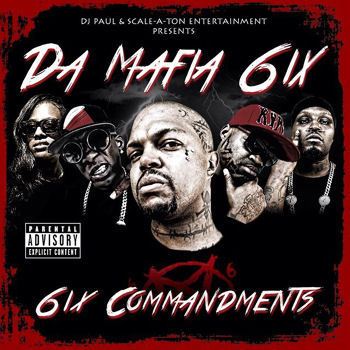 I’m not going to pretend to have the entire Three 6 Mafia catalog stashed under my mattress. In fact I must admit that for as long as I’ve been witness to it, I’ve watched their career with a critical eye. But at one point their influence on rap music became so obvious that it was impossible not to acknowledge their historical relevance. You simply couldn’t take in the rise of southern rap without sending off a knowing nod in the direction of DJ Paul and crew. That crew’s exact lineup has been subject to continuous changes over the years, and recently it seemed as if even the remaining core of the group – DJ Paul and Juicy J – would finally break apart.

News of a reunion under the name of Da Mafia 6ix without Juicy J fueled the notion that the Three 6 Mafia brand was discontinued for good. As so often, the future of the group is currently in the air, but last year Paul made it clear that he still considers J to be an integral part of the clan when he managed to pull him away from his mainstream obligations to rap on the epic homecoming “Body Parts.” Featuring some of the most prominent members and affiliates (along with some more random additions), “Body Parts” was actually only the latest in a series of songs named “Body Parts,” and that method of referring to previously established standards is the key to understanding “6ix Commandments.” Continuing on the way he pursued with 2009’s solo effort “Scale-A-Ton,” DJ Paul, the driving force behind the project, gives us more than a taste of that ’90s underground Memphis rap.

The most apparent song name match is “Break Da Law,” which revisits a Memphis staple (first recorded by Lil Fly and since remade numerous times) and paints this rap clique in unmistakable dark tones. While longtime fans have rejoiced in the fact that Lord Infamous, Gangsta Boo, Koopsta Knicca and Crunchy Black are present throughout, the November 2013 release (which is available in a free and a retail version) is also a current product that could take the fancy of a new generation discovering the uncompromising Memphis mindstate. Two of those recently recruited practitioners were invited to join the recording sessions. JGrxxn (JGreen) assists DJ Paul on 4 tracks and raps on “Body Parts,” while SpaceGhostPurrp produces and guests on “Murder on My Mind.”

They are witness to a master class in a style of music that has its own tradition and rules, music that is as energetic as it is eerie. Tracks like “Beacon N Blender” and “Betta Pray” represent the Triple 6 aesthetic in its purest form. Here is a group that has been as exploitative and gimmicky as any, but when they get down and back to business they bring a breathtaking realness to the game. Not the least bit apologetic about their wicked ways, they corner the listener in claustrophobic atmospheres and confront him with their psychotic and pathological thoughts and actions.

Perhaps it is a little bit too much for an audience for whom Rick Ross embodies the matrimony between some vaguely defined mob lifestyle and rap music and who prefers its drug-laced lines in homeopathic doses of ephemeral cloud rap. Arguably the album version of “6ix Commandments” (adding two bonus tracks) fizzles out sometime during “Body Parts,” but one of its most astounding features considering today’s rap landscape are Da Mafia’s vocal performances. You simply won’t encounter that kind of flow variety when you go through a contemporary playlist. From DJ Paul’s rough bark to Koopsta Knicca’s spooky whisper, these rappers are real characters even as their content often is straight out of the street rap storybook. They receive notable support from Yelawolf (“Go Hard”), two Bone Thugs (“Murder on My Mind”), fellow M-Town vets Eightball & MJG (“Yean High”), and lets not forget longtime tagalong Lil Wyte, who stars on “Remember” – whose real star though is DJ Paul, who slowly drags the sampled Irene Cara dreaming about heaven down into the musical dephts of Memphis rap, belting, “Where would they be without me?” and “What would they do without me?” before bragging about his crew’s legacy:

The future would look nothing but bright for fans of these godfathers of goth rap if it weren’t for Lord Infamous’ fatal heart attack last December, mere weeks after the release of “6ix Commandments.” Before, DJ Paul has argued that without Juicy J’s involvement they couldn’t possibly call themselves Three 6 Mafia. With the Scarecrow’s tragic passing and in light of all members except J having shown up to form Da Mafia 6ix, a project that could and should have led to a full-fledged comeback, at the moment it’s just as inconceivable to resurrect Three 6 Mafia without Lord Infamous. But right now “6ix Commandments” gets you as close to the collective’s essence as you can get.