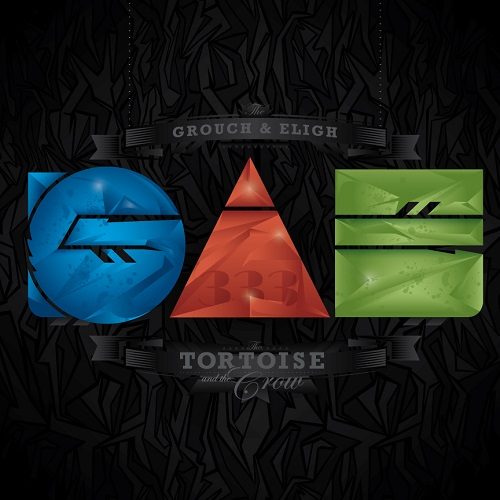 Eligh :: The Tortoise And The Crow: Nomads

This is a direct sequel to last month’s review of The Grouch + Eligh, because at the time I only had one album out of the triple disc set, and that was the “333” portion that the two recorded as a group. The ambitious triple disc set for “The Tortoise and the Crow” also came with solo albums for both artists individually, and while you can’t BUY the albums individually, the good news is that I gave “333” 9 out of 10 across the board. The digital price is so low you might as well just cop “333” and consider the other two a bonus.

Eligh’s “Nomads” is one hell of a bonus at that. I’m used to Eligh albums being eccentric and unorthodox, but this album took his tendencies in an entirely unexpected and pleasant direction. He’s known as a rapper AND producer, but this time around he decided to put just as much focus on the latter as the former. The first three tracks of the album are an aural trip across the cosmos, and like Neil Degrasse Tyson, the aptly named “Begin” will put you on a ship of the imagination. It flips back and forth between natural and synthetic instruments, weaving in and out a machine gun fast drum that’s not at all tense – it’s just the glue that holds the harmonies and ghostly vocals to the musical bind. “Paid the Price” is much more frantic but no less pleasant – it’s like reimagining OutKast’s “Bombs Over Baghdad” as acid jazz. The even MORE aptly named “Journey” takes you to the event horizon and beyond as Codany Holiday sings you “on the journey again” to the inner reaches of your mind. It literally makes the hair stand on my neck, as does Eligh completely flipping “I Only Have Eyes for You” by The Flamingos (you may know it better as “Zealots” by The Fugees).

Eligh is clearly having fun here, and that may be for the very reasons already stated above – if everyone is already buying “The Tortoise and the Crow” for the group album then Eligh can let his freak flag fly and do whatever he wants. I suspect that the opposite may become true though – people will buy “Nomads” and consider the other two discs bonuses. I’ve been hard on Eligh’s vocal tone and hyperdrive fast flow in the past, but tracks like “All On You” featuring Natalia prove he was right to ignore me. It wouldn’t work for everyone, but he nails it here as he talks about his complex relationship with existence:

“I know some ladies in my life who feel depressed when they’re alone
When I’m the opposite of that so they can always ring my phone
I’m always in my zone; although I get, lonely
for the female, energy I like my space
I hate to conversate too much, inside my head it’s deadly
Procrastination and boredom are my enemies who are forfeit
any time I give my time, my ear, to my ladies and my boys
My mind makes so much noise sometimes I can’t sleep
I know my people can feel me as I write this down to speak
Never hold it in when you can let things that hurt you from the inside out…”

This single track made me reevaluate my entire opinion of Eligh, who I previously thought was only best served when he had The Grouch or other members of the Living Legends to bounce off of. Each song on “Nomads” is a new revelation of Eligh to me, and props to him on sampling The Twilight Zone and its first episode for the track “Dark Tinted.” Things link together thematically on “Nomads” whether intentionally or not. That Twilight Zone episode was about an astronaut whose sanity was being tested in isolation to see if he could handle a trip to the moon, and the next song is called “Weightless.” Coincidence? It could be but Eligh doesn’t strike me as a man who does things that match up that way by random chance. This hour long album is telling a story, taking me on a trip, and it may be that like “Memento” the whole thing is unfolding from the end first and I’m just not able perceive it. Time and space are abstractions Eligh weaves around at will.

“There’s something wrong with me – I don’t know what it is
I’m attracted to what hurts, the most now that’s the shit
Give it to me baby hurt my heart I like the scars
I guess I haven’t learned my lesson yet…” – “Attracted to Pain”

Speaking of things which I don’t think are coincidence, Eligh goes a long middle chapter of this album solo, until after the slow and mesmerizing track “The Healer.” After he raps that “the masquerade has ceased” he starts to introduce friends back into the mix – letting Adam Theiss, The Grouch and Ellay Khule join him on successive tracks. Eligh doesn’t seem to be capable of expressing sentiments or ideas in anything but vivid terms. On “Regina” he doesn’t simply spit words. Eligh “lower(s) this pen to paper to search for something to say” and describes a woman he’s seemingly never met as a “voice that prances and dances across my eardrums.” He could just say “you make me want to write the words that express what I heard” but it’s that visualization that makes Eligh special. It’s the oft-used word “cinematic” that fits here – your mind’s eye can see what he’s doing and imagine this beautiful songbird that has so caught his attention. On the one hand it’s a shame the album ends there – but then again you’ve got two other discs worth of music to listen to.