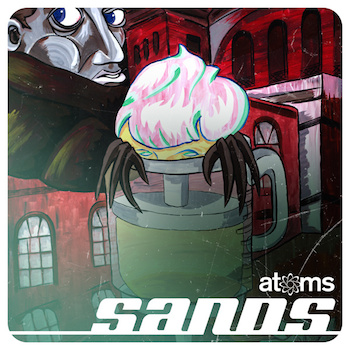 I was hit up about the ATOMS family through mutual friend and artist PremRock. Initially I suspected that I already knew them and it turns out I was right – they were literally the Atoms Family back in 2003 when staffer Vukile Simelane reviewed their “Family Archives.” Membership appears to have shuffled a little bit in the last decade, but the core of the crew is still in tact: producer Cryptic One plus emcees Windnbreeze and Alaska (who you may also know from Hangar 18). The initial e-mail was to broker a relationship for a review, but with time to reflect back on “Family Archives” it’s good to see that the lyrical skills are still ginsu sharp. Vukile gave them 9 out of 10 for it and “Mix it Up” suggests that they’ve still got it:

The warm background synth and whistling melody suggest “progressive rap” in its most positive attribution, which also suggests Cryptic One’s production skills have stayed on point. Though their bio declares that ATOMS is a “stupid fucking name” I’d beg to differ for two different reasons. First of all acknowledging your history in the rap game when you’ve been around for over a decade is not something to be ashamed of. Second of all their sound is actually quite molecular in its construction. The group bonds together like water, with the two hydrogen emcees bringing the heat, while the cool production from Cryptic and his cohort Jestoneart are a breath of fresh oxygen – and the result is tracks like “Hero to Zero” that FLOW.

Wind and Alaska are nearly equivalent in terms of flow and ability, which befits their molecular balance, but I’d be lying if I said I wasn’t mesmerized by Alaska’s verse on “Origami.” It’s another case of hip-hop exceeding the said same “lowest commond demoninator” they referred to on an earlier song, painting a darkly moving picture of the consequences of depression and bullying for lonely outcasts.

“Quickly became a misfit her only friend was the swish kid
which is what the bullies names him tried to shame him cause he switch hit
Life sucked they lived in bubblefuck at least they had each other
Adopted family by proxy sister brother father mother
Had no idea that Senior year it would all switch
Bullies beat swish kid near to death left him in a ditch
She got into Princeton no money she wasn’t rich
So she had to beg her daddy he told her no, called her a bitch
Swish kids body healed his heart and mind were broken
They found him 3 days later suicide through overdosing
Decided that she had to leave and left with no goodbyes or tears
No idea where she’s going but gotta be better than here”

The song ends with a hopeful refrain via the words “Now I can see/I’m stronger than my history.” This song has the power to not just entertain but to connect emotionally with a troubled and disturbed mind, and might just save somebody’s life. That’s a strong statement I know but it befits an equally strong song, and in the end I think it’s fair to conclude that the ATOMS (Family) are as good now as they ever were – possibly better.