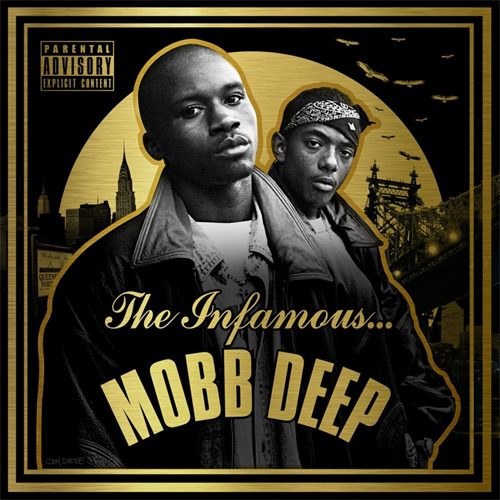 It’s not easy to come back with a sequel to a hip-hop classic, but that’s not going to stop Mobb Deep from trying. The release of the “Black Cocaine” EP in 2011 was a teaser that this album was a possibility, but a very public feud (over Twitter) nearly put this album on permanent hiatus. When they reconciled last year it was revealed that “The Infamous Mobb Deep” would be not just a sequel, but a tribute to the original, featuring unreleased sessions from the original 1994 recordings before they blew up on the national landscape.

Let’s start with that second disc of unreleased material, which starts with a new and extended version of “Eye for an Eye” with an entirely different instrumental and never before heard verse from Ghostface Killah. “Today’s math, fuck nothin but ass, take Cristal baths/go half on this robbery, we run up on Johnny Cash.” That’s worth the price of admission alone, but I can see why they dumped this version of the song – it’s nearly 7 minutes long and the beat on the album version is better. It’s paired with a skit of Ed Lover discussing the song with everybody on the album version and hosting a live freestyle session. This is followed by a Mobb song that’s been bootlegged for years dubbed “Take it in Blood” that’s actually called “Get it in Blood” on this disc.

This is followed by an alternate version of “Give Up the Goods” that I would have left in the vaults – it’s not anywhere near as good by comparison. “If It’s Alright” featuring Big Noyd is tight though – this could have been a bonus track on a deluxe edition or Japanese import version of “The Infamous.” The 1994 interview skit promoting their album that follows is completely unnecessary. The extended version of “Survival of the Fittest” is not a revelation – long time Mobb Deep fans have had that one in their archives – but it’s dope anyway. The “Temperature’s Rising” remix featuring Crystal Johnson has been a B-side or leak somewhere along the line too, but it’s a mellow take on the original track though and I dig the flip.

Six more tracks wrap up “The 1994 Infamous Sessions” starting with another unreleased Big Noyd track – this one is called “The Bridge” and as you might suspect it samples MC Shan. Another skit with a live appearance promoting the album follows, along with two versions of a song called “The Money” – the first clocking in at WELL over seven minutes. It’s the better version though both in terms of the beat and the Rakim sample – the latter just sounds flat and uninspired. “We About to Get Hectic” is a weird hybrid between their early recording career “Juvenile Hell” era sound and what they’d become by the mid-1990’s, but I’m not mad at this EPMD-esque sounding Mobb Deep song. It wouldn’t have made them rap superstars like their dark and grimy “Infamous” style but it wasn’t hurting anybody. “The Infamous” closes and is more like the Mobb you know. “I’m a classic/approach my level and get your ass kicked/floatin’ in the river wit’cha body wrapped in plastic.” Verse two is the same as on the original “Eye for an Eye.”

As for disc one, Mobb Deep was long promising they’d get back to their original dark and deep sound that made them a rap sensation, and they definitely give it the full effort. The key to that is production, because in the span of two decades both Hav and P’s voices have changed a bit, something that’s only more evident when you pair the bonus disc with it. Illmind gets the best out of them on “Murdera,” “Check the Credits,” “Dirt” and “Say Something” – transporting you back to a time when Mobb Deep and Wu-Tang Clan were spreading their own New York slanguage to audiences worldwide.

You’d be disappointed if The Alchemist wasn’t involved in this project, being one of their best known and most signature sound collaborators, and he comes through with three grimy songs as well – “Lifetime,” “Waterboarding” and “Get It Forever” featuring Nas. There’s just something about Nas and Mobb Deep coming together on a track – maybe because they’re all from the same hood – maybe because they’re all sparking blunts and enjoying each other’s company in the studio. It always sounds natural though. “But you know this already, my hood the coldest and deadly/Soldiers is ready…”

It’s worth noting this song was already on the “Black Cocaine” EP but it’s good enough that I’m glad they included it a second time. The nice thing about 2014 Mobb Deep compared to 1994 Mobb Deep is the collaborations that WEREN’T possible back then, as a whole new generation has been born and come of age. Mack Wilds and French Montana weren’t around to rap with them on “Henny,” which sounds like a remix of “The Learning (Burn),” but that just makes it better – especially since Busta Rhymes jumps on it with his over-excitable ass. You certainly wouldn’t have thought of them doing a Dirty South collab’ regardless of the age gap, but that Third Coast link is forged with Bun B and Juicy J on “Legendary” thanks to Havoc, Boi-1da and The Maven Boys. And at the height of the East coast/West coast rivalry, who would have thought of Mobb Deep rapping with Snoop Dogg? His verse must have came in at the last minute though because it’s not on the YouTube version.

“The Infamous Mobb Deep” is an enjoyable journey for long time fans of the group, but for newcomers it’s a hefty two hour plus tome that can’t be taken in one sitting. Even if you only listened to the first disc of two, it’s over an hour, and occasionally it’s a mixed bag. Songs like the Beat Butcha produced “Timeless” live up to the billing, and songs tracks like “Conquer” seem like they’re trying a little too hard to be epic. They don’t fail in production or delivery, they just feel tacked on to an album that’s already long, while “The Infamous” was exactly the right length to leave you wanting more and immediately play the whole thing again. “The Infamous Mobb Deep” has that same curse a lot of hip-hop double albums have had – and yet I don’t see any way they could have released the 1994 sessions separately and had people cop it to this degree. I don’t fault the cleverness, but even if this were one disc only, three less tracks could have made even more of a classic – and left material for the next bonus disc 20 years in the future.