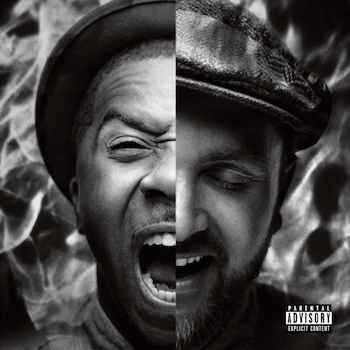 Johaz and Exile are two of the most slept-on artists in hip hop from the last five years. Exile made a name for himself alongside west coast emcee Blu on the superb “Below the Heavens” album released all the way back in 2007. Then there was the equally excellent “Boy Meets World” with Fashawn, another album that established a dope rapper as an ever-present in the underground scene. “Radio” was further proof of Exile’s capabilities, bringing his instrumentals to the fore and possessed one of my favourite tracks of 2010 in “Summer Song”. Having seen Exile live too, I can confirm that his MPC work is incredible – he treats that thing like a master pianist. It’s unsurprising then that he has gone on to work with the likes of Pharoahe Monch in recent years, but he has returned to the west in 2014 to team up with the emcee Johaz – most likely somebody you won’t have heard from before. It’s a shame, because Johaz was part of Deep Rooted, a hip hop group not too dissimilar to Black Eyed Peas when they first brought Fergie in – except they fully embraced their hip hop roots. Deep Rooted’s “D.E.E.P. R.O.O.T.E.D.” from 2009 was just that, so deep rooted that no motherfucker heard it. It’s a forgotten gem which benefitted from some top notch production and irresistible vocals from Brea – but the rappers were never particularly jaw-dropping. Listening to Johaz on “E & J” makes you realise just how overlooked he was in Deep Rooted, a group which also included Mr Brady, who has also just released a new album.

Johaz is a gruff emcee, not too dissimilar to Rakaa Iriscience of Dilated Peoples in his natural, easy-on-the-ear delivery. It’s easy to compare him to Rakaa in terms of overall sound, because both benefit from crystal-clear, professional production that bangs hard, even on slower songs. Of the two Dag Savage members, Johaz surprised me here. Exile can seemingly do no wrong, as his production feels like a follow-up to “Below the Heavens” in the way he has delivered a healthy mix of head-nod cyphers (“Drugs”, “F.U.P.M”) and more personal songs (“The Hurt”, “Cali Dreamin'”). It’s hard to really criticise this record from a musical standpoint – scatterings of chopped pianos and crisp drums remind me of Gang Starr’s “Moment of Truth”. What perhaps holds the album back from toppling Guru & Premier’s best work, is that Johaz isn’t quite as charismatic as Gifted Unlimited.

That may be a harsh comparison, it’s one that I’ve juggled with for a few weeks now – this album sounds phenomenal on first listen and I’ve had to listen to it at least twenty times to truly give credit (in the words of Mr Monotone) where it is due. Johaz helped create some good, if unremarkable albums with Deep Rooted, but as Dag Savage has certainly stepped up a level. “E & J” is just so damn consistent. “Oldtimes Sake” gives newcomers a bit of background to Johaz’ upfront manner (“I still have nightmares of my Aunt’s friend touching me, it’s why I’m cold to every woman that’s loving me”), whilst also throwing in other lines about working whilst pursuing a rap career, and feeling this collaboration with Exile is a new chapter in his life. It’s a testament to Johaz’s ability to just throw a deeply personal rhyme in to a song that could well be elaborated on and made in to a separate record altogether. Yet this is not an introspective, emotional journey that perhaps Blu would do with Exile, it’s a healthy blend of bragging, messing about and tackling everyday issues.

Radio-favourite Aloe Blacc earns his much coveted dollar crooning on “When It Rains”, a satisfying collaboration that doesn’t overpower Johaz given his star-quality. What is refreshing about the guest features is the inclusion of the extended Deep Rooted family – Aloe Blacc, Fashawn, Blu, Brea, Co$$ and even Ras Kass are all local artists that have links or past work with Johaz and Exile. Hearing Ras Kass on “F.U.P.M.” is surprisingly natural, given his penchant for violent imagery and gangster-isms. Most importantly, there’s a natural chemistry between both Johaz and Exile, and it is the moments of pure fun on tracks like “LL Cool J” that lend “E & J” its cohesive quality. This is most definitely an album rather than a collection of songs. An album that hammers home the fact that Exile is a producer in his prime, a talent that’s surely capable of working with bigger names and for bigger cheques but is equally happy blessing those he came up with, with some of the best instrumentals of his career. This is highly recommended – don’t let it stay “Deep Rooted”.