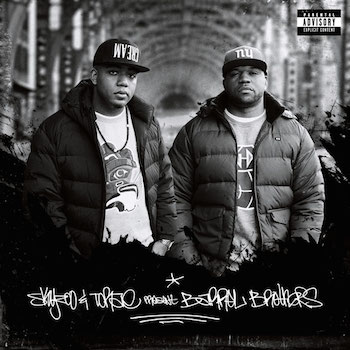 It’s hard to believe that Skyzoo and Torae burst on to the scene in 2007 with “Get It Done” (b/w “Click”), a dope single produced by DJ Premier. It feels like they have been around for at least ten years and with all of the legends that they have now worked with, you’d be forgiven for thinking their work dates back to the nineties. They have become part of the furniture; that comfy armchair that reminds you of years gone by. Similarly, Skyzoo and Torae both have a charm that’s unabashed, reliable and most importantly, gets the job done. No frills hip hop is what these two are all about.

“Barrel Brothers” is very much a continuation of Skyzoo and Torae’s previous records in that it is packed with thick bass and pounding snares. Thankfully, production isn’t overblown nor attention-grabbing to the degree that Skyzoo and Torae are swept aside by “bangin’ beats”. Chemistry was evident in any of Skyzoo and Torae’s collaborations over the last eight years, and their partnership is explored further on songs like “4 Bar Friday”. At two minutes long, it’s short yet sweet and I’m glad they got to move away from the standard 16 bar setups that frequent much of the album. As Torae proclaims on “Talk of the Town”, this is what you’ve been waiting for ain’t it?

The Oh No beat is certainly one of the best I’ve heard this year, akin to Marco Polo’s crunchy production on the excellent “Double Barrel” from 2009. Sean Price and Guilty Simpson join Sky and Tor to go “All In Together” over a piece of Black Milk production that will have fans of filthy drum loops smiling. All four emcees are as consistent as ever, although Sean Price surprises not in his content (he’s as “Sean Price” as he’s ever been) but in how he delivers his bars. As P gets older he has started slurring his words, like the cool, care-free uncle that’s slowly deteriorating. His eyes may be a bit droopier, his beard a bit thicker, but it’s still that unique street clown we all know and love. He doesn’t disappoint, but it’s certainly noticeable how his sound has changed ever since he dropped “Mic Tyson”.

There are some elements to “Barrel Brothers” that do underwhelm, particularly if you’re a hardcore fan. If you didn’t know DJ Premier produced “The Aura”, it may not be a big deal, but Skyzoo’s repetitive hook does make you wonder how much better some sharp scratches from Preem would sound. I wasn’t a fan of “Tunnel Vision” either, an admirable deviation from the traditional style the guys usually rap to (Torae more so). It’s not bad, but stands out amongst a collection of strong instrumentals from Illmind as one of his less effective works. Given the heavyweights that were enlisted for this project, it’s actually the lesser known producers who provide the best ammunition for “Barrel Brothers”. Praise deserves his name on the head-slamming “Albee Square Mall”, MarcNfinit throws prolonged vocals and Blu into “Rediscover” reminiscent of early Just Blaze, while Antman Wonder laces “Memorabilia” with some horns and what sounds like vuvuzelas.

Somehow, the numerous producers help lend “Barrel Brothers” a cohesion and overall sound that leans more towards Skyzoo’s past work than Torae’s. Yet initially, I found this album disappointing. In fact, that’s an understatement as I am big fan of both guys work, and with one listen, “Barrel Brothers” can feel generic and hollow. At surface-level it can be easy to write off this project as a few bangers filled out with lesser bangers. It WILL grow on you though, which is testament to both Skyzoo and Torae’s ability to grab the listener by the throat and let their music do the talking. Like Melle Mel said in Ice-T’s excellent “Art of Rap” documentary â€“ “my style is plain”. That’s not to say that Melle Mel tries to make his rhymes simple, or character-less, but insists on making sure the words that ARE there, are refined and the right fit. ‘Less is more’ is a cliche, but often one that works in hip hop. Torae has always struck me as having that “style”, albeit with a modern twist. You can hear a little bit of Rakim in his internal schemes, a little bit of KRS-One in his authoritative approach to the mic, and the way he embodies New York hip hop in every verse he spits is refreshing, despite the hundreds of New Yorkers spitting about how they are that ‘real hip hop’. Torae is the emcee those copycats are trying to be, except he has a distinct tone and a physical presence on and off the mic. Skyzoo on the other hand, is the more reasonable of the two, the one that has more charisma and dare I say it, swagger. “Barrel Brothers” doesn’t tend to play to Skyzoo’s strengths which are his storytelling, but that’s where his solo work comes in. This is clearly a record both emcees had fun making, and it’s definitely fun to listen to. I’m not sure it usurps “Double Barrel” or “A Dream Deferred”, two of my favorite albums of the last 5 years, but if you yearn for that classic, throwback hip hop without the played out production and done-to-death acapellas from Nas or Mobb Deep scratched over every track, “Barrel Brothers” will be stuck in your deck for the rest of the year, if not longer.