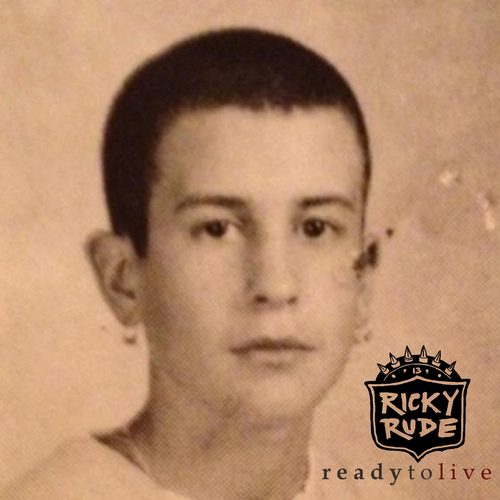 I can tell you exactly what drew my interest here. That sense of familiarity that I got from title, cover, name and even logo. New Jersey rapper Ricky Rude doesn’t fail to mention the important role that The Notorious B.I.G.’s “Ready to Die” played in his life, hence “Ready to Live” (a quite obvious pun, really). I wasn’t familiar with Rick Rude the wrestler, but there are enough double-R initials in rap history that the name had a familiar ring either way. The artwork recalls a number of covers straight out of the family album, while the logo resembles the OutKast emblem. A variety of pointers for a versatile mixtape.

A mixtape that opens with two high-profile guest spots, both rather astonishing. “So Immature” not only features Scarface but also a beat that is absolutely on his level, a simultaneously sprawling and piercing funky expedition that could land on virtually any point in Scarface’s discography. Only that this is a Ricky Rude track, one that is certainly catchy but remains inconsistent with or without the guest verse. “I just wanna share a couple of stories,” Rude begins, and soon we’re in the midst of a relationship recount, but then the prominent hook tells a tale of its own, the one of the rock/rap star living a shallow life. Ricky Rude flexes a solid storyteller flow, not unlike Wax out west. The problem in this specific case is that the detached, indecisive attitude that he exhibits spills over to the writing and smudges the song sheet.

Conversely, Ricky Rude knows exactly what he wants on the next track, “Stripper Ass, Model Face.” Here the guest isn’t a curious extra but a key ingredient, as the self-proclaimed “Baddest Bitch” Trina acts as the object of desire. With the rapper taking it to Yelawolf levels of intensity over a heavy trap beat, “Stripper Ass, Model Face” has, immaturity aside, little in common with “So Immature”. One track later he’s a family man, talking to his stepfather and marvelling at his own being godfather. With the spheric, guitar-driven “Thoughts” the tape takes yet another musical turn.

“Rock Chick” makes up for the lack of rock ingredients (his husky singing doesn’t qualify either) with a subtly swinging, percussion-heavy beat. Compared to “Stripper Ass, Model Face,” this is less of a fantasy than a portrait of a real-life relationship. Speaking of rock, electric guitars propel “Get it Crackin'” featuring Camden rap duo Sunday Down while live drums support the curious Heatmakerz-meets-Harry Fraud mixture of “Sucka Free” featuring Jay Griffy and Apollo the Great. The musical contrasts continue, even on individual tracks, see “Never Goin’ Back”‘s back and forth between indie soul and goth rap. “Ready to Live” ends on the same dark note with the Brainwave production “Problem Child” where Ricky Rude and Ruff Ryder Drag-On take a trip to the dungeons of (non-NY) horrorcore. But he also escapes up into the clouds with “Amanda Bynes” (Getting white girl wasted?) and “Dopamine” (which wouldn’t be out of place on a Curren$y project).

I’ma call this one like I see it. Ricky Rude’s initial idea might have been to combine his musical interests punk and rap. (His Facebook description still reads ‘hip hop x punk attitude = punk rap = Ricky Rude.’) He had a retail album out in 2009 called “All American A$!#*le,” which may or may have not been more reliant on his punk leanings. I don’t think too many people noticed. Four years later he releases your typical test-run iTunes EP (“No Guts, No Glory,” alternatively announced as a full-length), already including the Face and Trina songs – which are now given away for free on a mixtape that features production by known names like Cool & Dre, Cardiak, Sarom, and Battlecat. He has his own up-to-date website and a number of professional-looking videos. Somebody must believe in this kid. Or Ricky Rude believes in himself and he has the money to put where his mouth is.

As a rapper who goes from “Trina, Trina, let me eat ya” to white people problems (“They tryina take away our right to bear arms / I said they tryina take away our right to bear arms!”) within minutes, Ricky is somewhat of an easy target. There are so many directions being taken on “Ready to Live” that you can only conclude that his artistic identity is still in the developmental stages. Between the shittalking, sarcasm, sexual boasts, singing, etc. he’ll have to make a few decisions. Not that he needs to choose between his goofy and his thoughtful side, but some kind of focusing is advisable. Ricky Rude himself seems to be aware of his situation and breaks the fourth wall when he tries to explain himself to the listener on tracks like “The Interview” and “Ready to Live.” He seems capable to hit you in the guts, the question is does he himself have the guts to take it there? Going by the title track he seems at least prepared:

“Learning disability with ill rhyme ability
My ill hostility would have Pun feelin’ me
I think outside the box, fuck fillin’ in the circle
Fuck havin’ patience, that’s not a virtue
Sittin’ around waitin’, that will just hurt you
[…]
I don’t need a bankrupt major label tellin’ me I’m able
I don’t need a co-sign tellin’ me it’s showtime
I need my own talent and my own mind
I’d rather really own mine and take the slow grind
So when the labels take a nosedive I don’t get clotheslined
[…]
I’m inspired by people sayin’, ‘You ain’t shit’
Then I shut ’em all up when I prove greatness
I’m like Sid Vicious mixed with The Misfits
minus the addictions and triple the bitches
And I was born ready
And after analyzin’ the world, I’m even more ready”