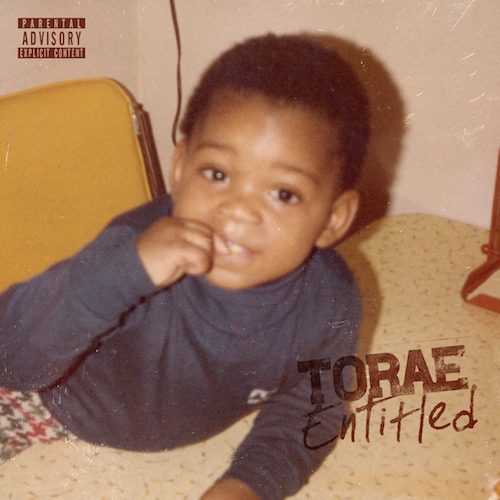 Whether as a soloist or as part of a team, the Coney Island emcee Torae is one of those lyricists you can count on to consistently deliver the dope s**t — or as he says himself on “Clap S**t Up” when teaming with Phonte “Even Bun B know I’m type Trill.” That song on “Entitled” also illustrates one of my other key points about Torae to open this review – even when he’s on a track with other venerable emcees he never gets bodied. He’s always up to the comp or exceeding it, and yet somehow is consistently underrated and underappreciated, and on this Nottz produced track he’s pissed off about that and not having it any more:

“Wanna hear my old s**t? Buy my old albums
If you really love it why I only sold thousands?
By the grace of God I made it out of housing
but I’m still Coney Isle’ styling
Wild as a +Stallion+ and cocky
Had to go +Rambo+ to get my wrists +Rocky+, cheddar drenched broccoli
That’s what’s on my palette and my Rally
Wardrobe was war mode, then I got a stylist
Now you wanna smile, miss? Miss me
On the hard wood where the Knicks be
Flick it up – ‘Melo dropped 60
Shifty, low down gritty and
I’m just doin this ’til my city is the s**t again
Dropped +Barrel Brothers+ it was notable – +Make You a Believer+
My verse ain’t get a +Quotable+, so f**k it I’m over you
No f**k it, I’m overdue…”

Let me say this one more time for the people in the back *AHEM* as I clear my throat: Phonte is one of the nicest emcees I know, and he drops great bars on this song too, but Torae still RAN THE BOOTH like he was Larry Fitzgerald busting through the D line in overtime. He flips a middle finger to the critics, compares himself to one of the biggest box office draws of all time, sneaks in a reference to Onyx (rewind if you ain’t catch it) and has so much swagger on deck that if you need a cup he’d fill you up and you’d wind up spilling like he does all over this beat. I know people often think of Royce Da 5’9″ when Nottz gets brought up, but there’s a lyrical slaughter in this house, and nobody’s safe with Torae spitting fire this hot. If this was the only time or only producer the “Entitled” review would be fairly short, but the problem with this 69 minute album is deciding which songs NOT to talk about. Even producers I barely know like Praise live up to their name providing the heat for Torae on tracks like “R.E.A.L.”

“Real talk, this as real as it get
The ones really gettin shine ain’t who really can spit
And ain’t nobody really helpin, they ain’t givin you s***t
On the real ‘less they feel you can give ’em a hit
and then they really goin card, really swipin the card
Really thinkin that you own the chain, house and the car?
But really that s**t is borrowed, really you gettin duped
and if they really spendin money you never really recoup”

This is what I enjoy about Torae so much. Even though he’s as clever as a muh-fugga and could just brag about himself all day and I’d still listen, he’s STILL taking the time to drop jewels. People are going to miss the point like they’re probably going to miss this album, but if there was a college course about the music industry I’d play this song on the first day of class, then tell everybody to go home and think about it until Wednesday. (The next class would be “The Business” by A Tribe Called Quest, but I digress.) Every now and then we talk about rappers and entertainers who have that “it factor” meaning their charisma is off the charts, but Torae isn’t just charismatic vocally, he’s impeccable on the breath control, and he’s writing lyrics that make you hit rewind to dissect what he just said. I think he sums it up best with the words “The triple threat of double entendres, single me out.”

I’m searching high and low for something on “Entitled” to tell you wasn’t worth the time and it’s like trying to find the proverbial needle in the G** damn haystack. The “Shoutro” is indulgent as hell, it’s nearly 12 minutes long, and yet the Khrysis beat is so damn smooth I can just listen to Torae talk about his life and times like it’s a f****ing YouTube vlog and not even skip a single second of it. If that doesn’t tell you something about “Entitled” then I’m not really sure what else to say. It’ll make you wish that you had donated to his Kickstarter campaign, because he shouts out the people who ponied up to help this album become a reality. There are dope guests throughout “Entitled” – Mack Wilds on “Troubled Times,” Saul Williams on “Imperial Sound,” Pharoahe Monch on “What’s Love” and such but no matter who shares the stage the spotlight’s all on Torae. We just finished The Year 2015 in Review and by the time another 12 months goes by we’re going to be talking about “Entitled” on everybody’s list for 2016.