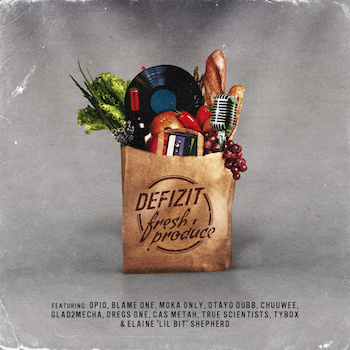 Nowadays when someone says they are a hip-hop producer, they usually mean that they are working with a laptop. Flipping samples is becoming a lost art, due partially to changing styles but mostly because of the many lawsuits brought against crate-diggers for copyright infringement. It used to be enough to find obscure records, but the internet has made it easy to out even the rarest samples. Stockton, California producer Defizit’s tagline makes it clear that he practices “sample based beatmaking.” That production style gives “Fresh Produce” an old-school feel that is as familiar and comfortable as an old sweatshirt.

Simply put, Defizit flips samples over hard beats. Some tracks are jazzy, some tracks are funky, and there are even a few that are quiet and introspective. The uniting thread on every single track on “Fresh Produce” are the thumping bass and snapping snares.

The MCs Defizit works with are just as committed to classic hip-hop. They display a focus on lyricism and a respect for the art form. Sacramento MC Chuuwee provides some flossing. Opio and Moka Only offer up some positivity. Dregs One urges listeners to consume more nutritious music on “Food,” and Cas Metah and EF Cuttin rap about keeping it real. Otayo Dubb, Blame One, Tybox, and Glad2Mecha are all represented. True Scientists sound like life is getting them down on “Freedom Drum”:

The album ends with Bahrain-born, Canada-based reggae singer Elaine Lil’Bit Shepard, who says “We doing what we doing for our future not for today.”

In an interlude, Defizit samples Steve Buscemi’s character Seymour from “Ghost World” saying “I can’t relate to 99% of humanity.” Seymour is an obsessive collector of rare blues 78s who hates contemporary blues, and his failure to understand current music is at the heart of his alienation. Deficit seems to be struggling with this same sentiment. A lot of hip-hop today is almost unrecognizable from what it was 20 years ago. Does being a traditional hip-hop fan, performer, or producer make you out of touch and obsolete? Or is there a way to respect the art form as it was while keeping it fresh? Is there a middle way between the Migos and being a crank at home complaining that no one makes beats like Primo did circa 1992? “Fresh Produce” is an attempt to make new music that respects old school tradition. It’s to the credit of Defizit and the MCs that the album doesn’t feel tired, stale, or like its wallowing in nostalgia. Like Defizit’s graffiti tag name and logo, “Fresh Produce” may not be cutting edge but it has a timeless quality, and is well worth the price of admission if you are in the mood for some new old school.