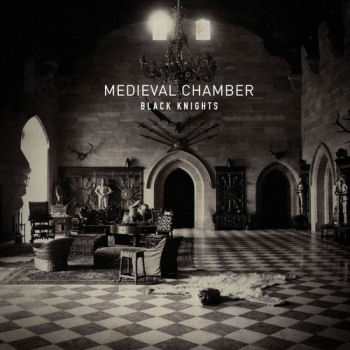 If you’re a group called Black Knights, with song titles like “Drawbridge”, “Sword in Stone”, “Camelot”, “Roundtable” etc. on an album called “The Medieval Chamber”, you’re setting up your listeners with a pretty clear expectation of what the album should be like. When that theme doesn’t actually eventuate, it makes one wonder what the point of it all was? What also may make one wonder is why have an offshoot Wu-Tang crew decided to enlist an ex-Red Hot Chilli Peppers member to produce their album ? I guess in this day and age you could argue “why not?”, given that someone like Blink’s Travis Barker has also decided that he’s justified to give hip hop beat creation a shot. Fair enough too I suppose as nothing in hip hop is sacred ground anymore.

So does this rather strange collaboration work? Not really.

The positive is that Trickfinger (AKA ex-Chill Pepper guitarist John Frusciante) knows how to put a decent hip hop beat together. He brings an overall sombre, almost depressed feel to the album, which is going to appeal to you if you are in that sort of mood. At a stretch you could say that the gloomy darkness of the music does lend itself to providing a medieval vibe of sorts, there are a few classical loops used to try and reinforce that, and “Knighthood” (for example) has a sample from a very British sounding old folk song, but at best they are subtle attempts to fulfil the idea. There is very much a formula to his production; haunting loops, mellow and tripped out keyboards and synths, bits and pieces of singing (Frusciante’s own singing and also samples), over slow to mid tempo bass-filled beats that may or may not have funky elements to them. Admittedly, it is a sound which becomes weary after only a few tracks, but if you want a consistent sound on an album then you’re getting it on “Medieval Chamber”; thus our producer has established a trademark style one album deep into a hip hop production career. It may also be refreshing to some people to know that he’s not really aiming for a typical “Wu sound”, although “The Joust” does throw in some off-kilter piano keys that sound like they’re taken from RZA’s own virtual piano.

The real letdown here is that Black Knight’s MC’s Rugged Monk and Crisis Tha Sharpshoota seem very detached from the album’s concept. Both are reasonably talented rhyme slayers, with an East Coast grit to their catchy West Coast drawls, but their lyrics are totally seperated from the theme (a theme which I’m guessing was more Trickfinger’s idea than theirs); they are spitting basically the same boastful rhymes on pretty much every song here – they don’t seem to care whether the song is called “The Joust” or “Medieval Times”, they’re more interested in simply telling us that they’re the best from Compton. The only songs where they show some awareness of the song titles are “Deja Vu” and “Keys to the Chastity Belt”. However the “Deja Vu” is more or less a case of Black Knights telling us they rip mics time and time again, and “Keys Ã‰” is simply every day rapper verses about dick prowess and “juggling a lotta hoes”, so it’s hardly any redemption in terms of concept matching. I’ve heard Black Knight’s older music, which was essentially Kurupt and Daz influenced West Coast gangsta rap, and basically they’ve taken the same lyrical content without any adjustment and transplanted it over a suggested medieval concept hoping that no one would care or notice. Even when Trickfinger uses a few movie excerpts that range from everything from torture porn to unexplained missing dogs to haunted houses, our mic controllers still prefer to rhyme about their skills on the mic and apparent skills with women.

Technically the album has a couple of issues also. I’ve always disliked poor audio quality in original recordings and this album is another example of that – something which shouldn’t really be happening in 2014. Most songs on my CD sound muffled and some play louder and cleaner than others. I’m not hip hop engineering savvy enough to tell whether this is a case of lack of attention to final mastering detail or the fact that the tracks may have been recorded in various places on random equipment, but whatever it is, the lack of professional finish is disappointing and makes for a frustrating listen. Also there is evidence of a rushed cut and paste effort as the album’s intro “Drawbridge” plays as three individual, unrelated tracks that have been stuck together to form an incongruent album introduction (nothing in the intro has any suggestion of a drawbridge or anything medieval either).

I’ve always liked Black Knights, I liked them when they first appeared as part of a larger collective with fellow Wu family members Northstar called Black Knights Of The North Star, and didn’t mind their later work as their own entity, but they’ve lost me with this disjointed, short 10 track album by not painting the picture that the sketch outline promised. Definitely a case of what could have been, but wasn’t.