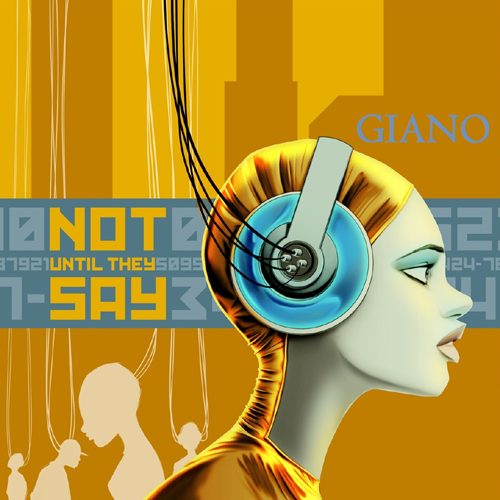 Giano :: Not Until They Say

It’s not that hard to repeat doctrine. All you need to do is put the time into reading and memorizing. It is much harder to apply that doctrine to real life. It is also much more useful. While Giano’s earlier releases put him in the Christian rap camp, on “Not Until They Say So” he comes off more as a Christian who raps rather than a Christian rapper. He doesn’t hide his faith, but he’s more concerned with examining how we can try to live according to our ideals rather than preaching scripture or trying to convert listeners. That makes the album more approachable: you don’t have to be on board with his specific religious beliefs to get something out of what he is saying.

The beats rework popular songs by Eminem, Kendrick Lamar, Rhianna, Ashanti, the Clipse, Dre, the Wu-Tang, and others. Giano basically takes the best part of some of the best hip-hop songs of the past twenty years and molds them together, even going so far as leaving entire verses in. It works, but it also puts him at a bit of a disadvantage. Giano is an able rapper, but it’s tough work to go toe-to-toe with Eminem or Kendrick or the Wu. Giano has skills, but he’s not quite on that level. His earnestness and desire to get his point across lead him to stretch syllables, mispronounce words to get a rhyme, and do other tricks to force words to fit into spaces that aren’t quite the right size. On the other hand, he actually has something to say, which makes the occasional dubious rhyme or overworked metaphor forgivable.

“Not Until They Say” is interesting in the way it questions the potentially negative role hip-hop music has on the lives of the people who listen to it. As Giano discusses the ways in which he (assuming his songs are autobiographical) has stumbled in his past, he references how his actions were reflected and supported by the music he surrounded himself with. He’s not blaming rap music for making him violent or disrespectful to women, but he is questioning whether the negative subject matter often found in hip-hop is truly harmless. The songs question the hip-hop (and pop culture) staples of sex, drugs, and violence, asking the listener if is this who we want to be. That may sound scolding or like a lecture, but it comes off Giano inviting the listener in as he tries to work through things.

“All I’m saying is think for yourself about your life,” he raps on “Morning Lights.” It is a recurring theme on “Not Until They Say”: don’t accept things at face value, don’t go along with what everyone else is doing, and make your own decisions about your life. The fact that he is able to do it in rhyme over solid (borrowed) beats makes “Not Until They Say” worth a listen, no matter your religious affiliation.