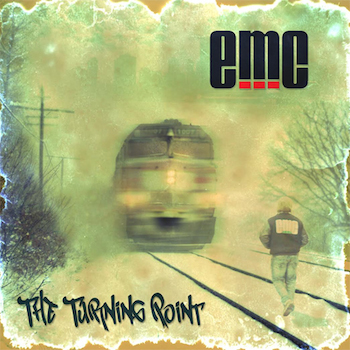 The four-headed monster is an oft-recited piece of imagery used by hip hop quartets, but one that is a curse rather than a blessing. Slaughterhouse, HRSMN and even Jurassic 5 have discovered that one head will eventually dominate and the anarchic nature of four men grasping for the listener’s attention inevitably means that whole projects offer a few great songs combined with a slew of hot and cold verses. eMC are rare, in that they operate more as a four-headed man (I’ve still not seen one), where each head isn’t obsessed with one-upping each other. They aren’t breathing hot lava through structured 16-bar verses that seem overly technical, as if judges are holding scorecards up once the sixteenth bar hits home. Masta Ace, Stricklin, Wordsworth and Punchline are a unit, one that possesses chemistry, togetherness and a welcome light-heartedness that makes them easier to digest than whatever it is that four-headed monsters eat. Back in 2008, eMC provided their only album; “The Show”, a superb concept album that was heavily influenced by previous Masta Ace efforts like “A Long Hot Summer” through its use of cohesive story-telling and an over-lapping narrative that tied all the songs together.

“The Turning Point” can’t be compared to “The Show” in one sense because it’s barely been promoted, but it’s also meant as a quick reminder not to forget about eMC – or how I like to consider them, the modern progression of Masta Ace Incorporated. They confirm that “The Show” wasn’t a one-off collaboration, but this twelve-track effort is potentially more story-driven than their previous work, thanks in part to 50% of the project being skits. Before you consider this to be the “turning point” at which you do a 180 degree U-turn and sprint to the next review, it’s deliberate. Granted, the premise of four guys trying to organise recording sessions on Superbowl Sunday could itself be a reason why this project took six years to materialise – but dumb ass planning aside, this 30-minute tale of reunion is worthwhile yet the skits will inevitably affect replay value. Punchline is in a strip club (presumably as a client rather than an employee) on “Body Shots”, Stricklin is on duty in the “Firehouse Lounge” and Wordsworth has opened his own nursery where children act out their violent fantasies. It’s a plausible narrative that ties the songs together nicely – and the songs are as strong as you’d expect.

“The Coolest” and “Charly Murphy” are the guys just dusting off some cobwebs but both remain polished and proof of the natural chemistry the four exude. “Stay Busy” is a reminder for those who wondered where Ace, Punch, Words and Strick had been and while it may sound odd for a fan of these guys to hear them name-drop all the albums they’ve recorded since 2008, it’s at least genuine. That’s essentially what eMC bring to hip hop, they are genuine emcees that not only have chemistry, but can provide music that stretches beyond the standard one-upmanship of fellow crews. The music that is present is as refined as you’d expect. Production ranges from the crisp piano-laced “Verified” to the dancehall-infused “The Coolest”, but the way each track contains beat-drops and minor switch-ups allows the four members to take over from each other in a manner that remains far from formulaic.

Given that the project is bordering on an EP in length, it’s certainly worth thirty minutes of your time. If anything, it’ll make you go back to “The Show” and dig through the guys work that they mention on “Stay Busy”, which is half of the point really. The other half is to build anticipation for a full-length, and “The Turning Point” is convincing enough to get the newest of fans more hyped for this than any Slaughterhouse album can.