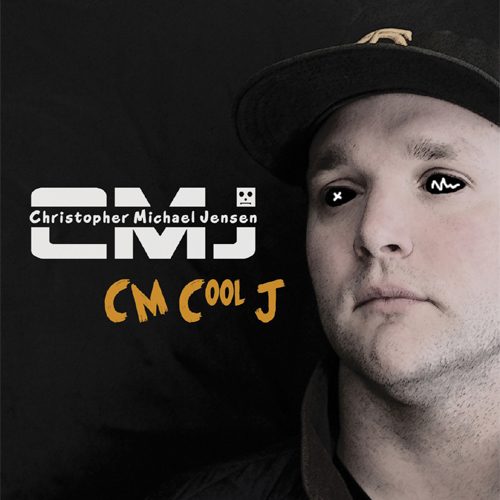 Minneapolis emcee Christopher Michael Jensen takes pride in being an authentic product without any false pretense. He doesn’t have a rap name – it’s the same as the one printed on his birth certificate. He doesn’t act as though he’s the coolest cat on the block, even though he (figuratively and literally) comes from one of the cooler rap scenes out there today. If you asked Jensen he’d probably say he’s a bit nerdy – not quite “nerdcore” but posessing the sense of whimsy you’d hear on a mc chris record. While Jensen is serious about his rap career, he’s not so serious that he can’t use his own name as a pun on LL Cool J in the title of his new album “CM Cool J.” The mirth also hides his thoughtful reflections on deeper issues:

“We’re all protagonists with our own version of happiness
They can’t all sync up and that’s where conflict comes
into the picture, we all see the frame differently
So for every bit of joy deploys another’s misery
The fallen form a void, torn like corduroy
Becoming destroyed by noise from a symphony”

Jensen employs a diverse range of producers on “CM Cool J” who are able to suit their beats to the topic and style of each song. “Political Party” (prod. ICETEP) is CMJ’s vow to “take (power) back from those empowered by the evil” and appropriately enough sounds like the Twin Cities meets The Coup. Jensen is a little bit Marshall Mathers on “Psychosis” (prod. Wesley Opus) but we mean that only as a compliment to how well he captures his lyrical feeling of madness. The darkest track may be “Nightmare” though (prod. dB), a haunted castle of hip-hop with ghostly melodies floating over drums and hi-hats.

Jensen’s civic pride can be found in “Minneapolis State of Mind” (prod. Rich Garvey) and his melancholy can be found in “Troubles of a 20-Something” (prod. Antioch) when he asks “What is it about life that makes it so hard to just do what you want and be happy?” My answer – bills – and for the most part that’s his view too. Christopher Michael Jensen’s music is effective because he’s not talking over the heads of his audience nor is he talking down to them – he’s relating to the listener at the same level dealing with the same problems and issues that he is. Unfortunately a lot of today’s rap audience would rather live in fantasy than reality – drink, smoke, party and fuck all day and all night. Jensen is hopeful for the future (“Even the tired and poor can wake up to be rich” – “A Life”) but too grounded in realism for “CM Cool J” to be a fantasy. He’s not gonna knock you out or meet the girl from around the way, but his Twin Cities flow is A-okay.