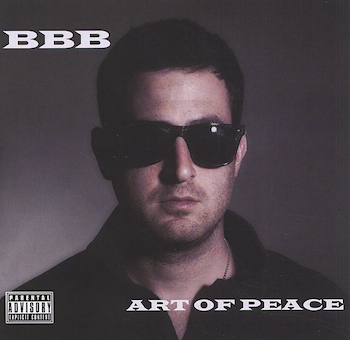 “Yo, you all that – you’re a jaw dropper
That’s why my balls are hittin your clit like a doorknocker
Knock knock baby girl – hey you called me?
That’s a joke; I’m already in balls deep
And it’s all me – this is my shit
And it’s my life – and it’s my dick
You you know the definition of indefinitely?
When my balls are hittin your clit I’m in, definitely”

If that opening lyrical salvo seems incredibly crude I apologize. I didn’t want to waste your time though and beat around the not-so-metaphorical bush that Big Bennett Bionic is on “Hiftbsycwmbs” – and since it’s the first track after the intro there’s no reason not to. You may be saying to yourself “So he’s a little raunchy – so what? So was Akinyele.” That’s true. A lot of hip-hop’s most successful rappers have been sexually crass – Too $hort among them – but what both Mr. Shaw and Mr. Adams have that BBB lacks is PERSONALITY. Too $hort convinced me that he could really turn a bitch out on the street, and Akinyele could certainly turn one out with his mouth, but Bionic sounds like he’s trying to convince himself.

A generous interpretation would be that BBB is intentionally rapping in a monotonal unenthusiastic way as an avant garde rap style – a style choice meant to turn rap music convention on its head the way that Death Grips has become famous for. I wish. BBB is incapable of rapping any other way and you don’t need to sit through much of “Art of Peace” to figure that out. This is two-thirds of an hour I can’t get back, and “Lilah” is 13% of an hour all by itself. “Yeah… we were there, on some honeymoon shit/I was sprung as fuck-in in love with this chick…” and the hyphen in “fuck-in” is not a typo. He raps so slowly it actually sounds like two words. Neither Evidence nor Parrish Smith were ever this Mr. Slow.

The most perplexing thing here is that Mr. Bionic is obviously sincere. This is not a randomly distributed free to download digital album – it’s a professionally packaged CD that pulls up a Gracenote song tracklist when you pop it in your laptop or computer. It’s available for sale on Amazon.com in digital or physical formats. Despite the extremely minimalistic packaging and lack of accompanying press kit, I have no question that BBB is serious as cancer about rapping. The problem is that he raps like he’s been treated FOR cancer. His tongue is slow, his words are plodding, and his lack of adrenaline make even potentially interesting beats like “Clack Clack” lack staying power. He describes the scenery around him, but there seems to be no point – it’s like he’s reading us his grocery list.

At some level I’m not capable of buying “Art of Peace” as being a real album. It feels like an elaborate prank on me, an attempt to get me to write an utterly scathing review, the kind of vitriolic diatribe that would make the laconic Bionic actually get excited for the first time in his life. I regret to inform BBB that I can’t recommend “Art of Peace” to anyone, not even people who need a good audio sedative, and that’s as mean as I’m willing to be because I suspect this really isn’t a joke and he sincerely believes he’s a good emcee. Since art is in the eye of the beholder this “Art” may in fact be somebody’s cup of tea, but if the readers of the site are anything like me we’re not the target audience for whatever new genre of rap Mr. Bionic is singlehandedly creating here.