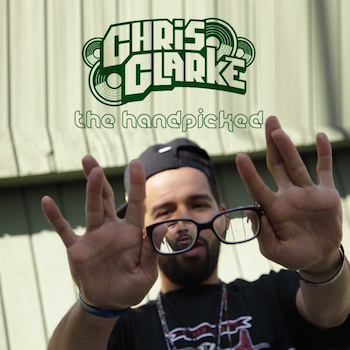 That last one is actually the key. Chris Clarke doesn’t go out of his way to point this out – it’s not even mentioned in his official press release – but he’s the son of jazz legend Stanley Clarke. You might have expected him to grow up playing bass or piano as a result, but instead he’s a producer for almost all of his tracks on “The Handpicked.” I guess that musical genius had to manifest itself somewhere other than just in his rap, passed down from father to son, but I’m secretly glad that Chris wound up as a rapper instead of rocking a double bass. I think it’s a good sign for hip-hop that the sons of famous fathers from other genres would rather rap.

Yes – that is Smooth of Nice & Smooth fame. Even though Clarke is a Los Angeles artist and a majority of his guests represent a West coast state of mind, he’s reaching a hand out to anybody he thinks is dope from the past or present. This results in both familiar and completely unfamiliar collaborations – I can unapologetically say there was nobody I recognized on the aptly named “Something New” featuring Lil Miss, Voy & Natasha Agrama.

For some reason I kept expecting to hear Kurupt rap over the beat – in fact there’s some part of me that believes that would be a natural collaboration even though it’s one of the few that DOESN’Toccur on “The Handpicked.” The album certainly lives up to the name though – Clarke is working with all the people he wanted to. Sleepy Brown gets on down for “The New Crack.” Double K from People Under the Stairs drops in for “LAFD.” Wait though – I said I wasn’t going to run down every guest appearance – so I’m not. Let me just say this – after an hour and ten minutes of “The Handpicked” I really don’t have a handle on Chris Clarke at all. The tracks he produced on the majority of the album are good – but so are the ones he didn’t. His raps seem to be adequate, but they’re largely lost in the shuffle of so many guests. “The Handpicked” is enjoyably frenetic but perhaps mimics jazz in a way he never intended – it’s completely improvised and caters solely to the whim of the player(s) making the tune.