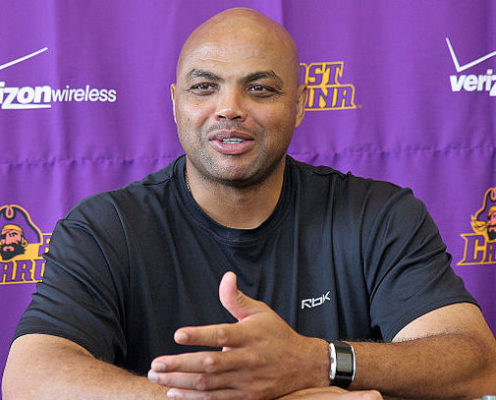 Did Charles Barkley Go Too Far Or Not Far Enough?

Call him Chuck, Sir Charles, “The Round Mound of Rebound” or Mr. Barkley – but you can’t ever call him quiet. Charles Barkley has never been shy about espousing his opinion on a variety of topics on or off the basketball court, and on Monday the 11-time NBA All-Star stepped into the spotlight again while talking about Russell Wilson, quarterback for the NFL champion Seattle Seahawks.

The remarks by Mr. Barkley were actually made in an interview with Philadelphia radio host Anthony Garano last Thursday, but it took a few days for what he said to be transcribed and make the rounds – quickly going viral yesterday morning. Barkley’s remarks specifically address the notion that (allegedly) Wilson’s teammates on the Seahawks think he’s “not black enough.” Below you can hear and read how Sir Charles responds to the concept in general.

“When you’re black, you have to deal with so much crap in your life from other black people. It’s a dirty, dark secret; I’m glad it’s coming out. It comes out every few years. I wrote a big chapter in my book about it to be honest with you. I said, you know, when young black kids, you know, when they do well in school, the loser kids tell them, ‘Oh, you’re acting white.’ The kids who speak intelligently (right) they tell them, ‘You’re acting white.’

When Mr. Barkley says this “comes out every few years” he’s on point – it’s only a secret when people forget that it has already been said before. Hip-Hop frequently revisits the issue lyrically, addressing the so-called “crab mentality” best understood by visualizing a barrel full of crabs as a metaphor. Any of the crabs individually could escape the boiling pot of water and drawn butter that is their fate, but any crab that gets to the top is pulled down by the other crabs before it can escape – so no crab can succeed even though they could ALL get out. Charles views the idea of “not being black enough” as a perfect example of the crab mentality.

“It’s crabs in a barrel. The thing that’s hap- we’re the only race that tell people if you don’t have street cred, with like, that means you been arrested – like that’s a compliment. We’re the only ethnic group who say, ‘Hey, if you go to jail, it gives you street cred.’ It’s just typical BS that goes on when you’re black, man.”

The online reaction to the remarks from Charles Barkley was all over the map. Some critics say that Barkley is fulfilling the “Uncle Tom” role by portraying himself as better than other black athletes, artists, and even his peers growing up in Alabama – drawing favorable media attention and the rewards of being a sports analyst while he’s sitting “in the house.” Barkley has admitted his faults on many occasions, drawing attention in the 1990’s for his “I am not a role model” stance, and admits he has gambled away more money in a day than most of us will probably see in a lifetime. His honesty about his flaws doesn’t make him above reproach, but it does give him the concrete to stand on to offer criticism about what it means to be “black enough.”

It doesn’t seem on the surface that Barkley thinks he’s better than anybody, and for those praising him for the chutzpah to say what he did, it’s accepted that Barkley knows a thing or two about having to rise to the top despite numerous doubters and naysayers. Criticism about his large frame dogged him dating all the way back to his college days at Auburn, despite setting all kinds of school and SEC conference records as a player. Even when Barkley was part of the “Dream Team” that won Olympic gold, people still dogged Barkley that he never won “the big one” by playing for a NBA championship team. Barkley has never avoided the spotlight, or the accusations that he himself was a “thug” on the basketball court, letting his success on and off the court speak for him. Barkley never let a crab pull him down, and he’s had no shortage of haters in his life who have tried.

The debate about whether being “black enough” is a “crabs in a barrel” mentality will continue long after the furor over Sir Charles’ remarks has died down. Hip-Hop walks both sides of the debate musically every year, with parents and educators accusing rappers of glorifying nihilism and violence, while artists themselves point out (1.) They’re just articulating the reality of their environment (2.) It sells better than “nerdy” or “intellectual” rap and (3.) The critics are themselves serving as crabs in a barrel by not letting them succeed. I’ve always sided with the first amendment as the answer, as I believe that even the most unsavory of sentiments from an artist has value, even if that value is in the debate it sparks.

That’s the best thing Charles Barkley has done – reignite the debate about cultural values in a way that can extend far beyond his community. There’s a “crab mentality” in all kinds of environments, and any school kid anywhere who has ever been called a “nerd” or a “teacher’s pet” knows a little something about it – even a farm kid like me. I think I’ll let Alfonso Ribeiro have the final word on this debate for now though, as his character Carlton made a rather eloquent statement about whether or not he was “black enough” on an episode of The Fresh Prince of Bel Air.