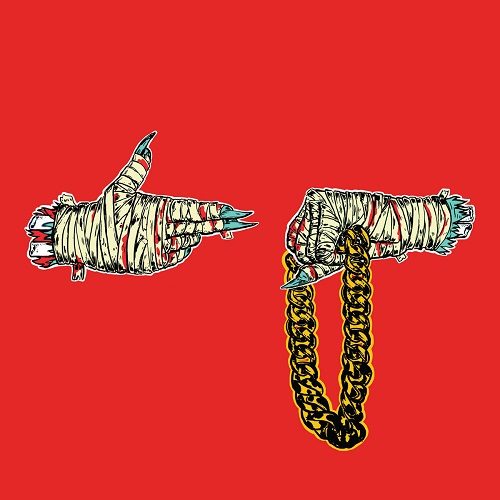 Run the Jewels, the initially unlikely duo of indie darling El-P and Southern rap heavyweight Killer Mike, took the hip-hop scene by storm in 2013 with an album that was released free digitally and for a nominal fee physically. It turned out to be the classic hip-hop odd couple, as El-Producto’s penchant for futuristic beats and linguistic inventiveness (who else rhymes “blunderbuss” with “thunderous”) were perfectly met by Michael Render’s ATLien swagger and street smart reality. Get arrested by the “Hip-Hop Police?” Mike knows what your chances of beating the rap are: “Cause if you ain’t Jigga or Puff, you doin time/and even then you might get 10, word to Shyne.”

The unapologetically unconventional duo surprised the world by dropping Run the Jewels 2 early, essentially saying “f#%! a Tuesday drop date” and/or “f#%! a record store.” Of course it helps when you have the artistic freedom TO eschew convention thanks to a large fanbase, and the first RTJ album cultivated all of the support they would or could ever need. The duo offered a wide variety of pre-order packages that quickly sold out, and just for the humor value some additional packages with ridiculous names and prices.

One of them was so off the wall that it was launched it as a Kickstarter and people actually took the bait – including yours truly. After all they already gave away the album digitally for free, so paying $10 for a chance to hear the “Meow the Jewels” version seems fair (and El-P is donating the money to charity anyway). I’m still trying to imagine how a version of “Love Again (Akinyele Back)” will sound with nothing but cat sounds – though it will fit Gangsta Boo’s verse well.

The song itself is yet another case of El-P and Killer Mike flipping the script on expectations. In case anybody had pigeonholed Run the Jewels as a “meeting of the minds” between two intellectual rappers with two completely different styles, the raunchy track and Gangsta Boo’s crass verse brings back memories of Ak’s mid-1990’s hit “Put It In Your Mouth” – hence why he’s referenced in the song title. It’s not some Dirty South meets NY political mindf#%! – it’s just a straight up fun ode to getting dirty and stankin’ like an Ol’ Dirty Bastard (R.I.P. Russell).

There’s plenty of fun being had all over “Run the Jewels 2” even when the tracks are deadly serious. That’s the chief reason that El-P and Killer Mike work – you can see the studio sessions in your head and envision them bouncing ideas off each other saying “How can we top the last one? How can we mess with our fans? How can we make some next level hip-hop without becoming pompous and full of ourselves?” Answer – by making songs like “Angel Duster.”

Killer Mike: “I kill my masters, I’m into none
Dat means when I die that’s it
My style is gone, I’m a one to one
One half of the great… RTJ
Cause these are the odds, went to war with the Gods
Earned all our scars and came back great”

There aren’t many cameos on “Run the Jewels 2,” not that you would want anybody to get in the way of their vibe, but the ones that do show up definitely count. Along with the aforementioned Gangsta Boo, Travis Barker lends his drumming skills to “All Due Respect” to give it extra adrenaline, and Zack De La Rocha lends his anti-establishment Rage to the song “Close Your Eyes.”

The only thing you really need to know is that no matter how you cop RTJ2, whether it’s as a free digital download, a physical copy from Mass Appeal or the super-expensive “I’m On The Guestlist” supporter package you’re getting more than your money’s worth. The non-bonus track version clocks in at 11 songs and just under 40 minutes, El-P and Killer Mike not wasting a minute of it. “We run this spot like a Chinese sweatshop” brags the incredibly politically incorrect El, complete with the sound of a whip cracking, and it’s their ability to flip a middle finger to everybody and everything in sight while still producing hardcore rap to thump in your car stereo that makes them so much fun. Take “Blockbuster Part 1” for a spin on the highway. Killer Mike: “Last album voodoo, proved that we was f#%!in’ brutal/I’m talkin crazy, half past the clock that’s cuckoo.” So they are.