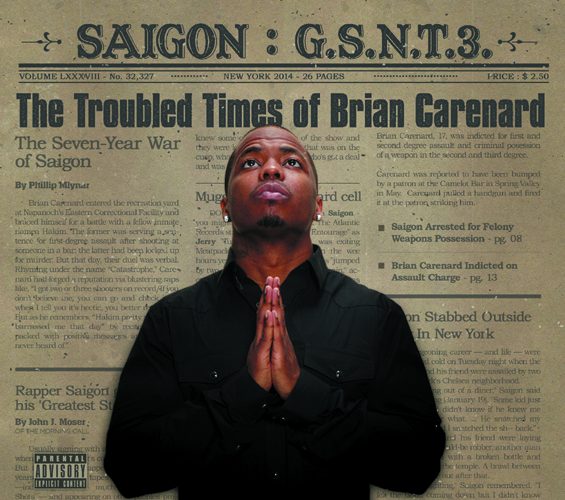 One of the main representatives of the ‘mixtape rappers’ era, Saigon had to wait an eternity to release his proper debut album. A little more over three years later he’s already presenting the third installment of what now has to be called the “Greatest Story Never Told” series. Subtitled “The Troubled Times of Brian Carenard,” it’s the first one without the support of Suburban Noize Records. Nevertheless “the motherfucking saga continues,” one might be tempted to quote N.W.A, were it not for Saigon’s image consciousness. His story – or the story he’d like to tell – is essentially that of the bad guy gone good, so quoting the biggest icons of gangster rap seems inappropriate. And yet N.W.A and their generation packed a lot of political dynamite into their music, and if Saigon has a problem with street orientated rap, he likely has today’s unreflected glorification of the fast life in mind.

He’s on a mission and like any proselyte doesn’t hesitate to let you know about his conversion “from gangster to good guy.” Detractors are easily found and named (Jimmy Iovine apparently conclusively being identified as the industry fall guy). Just Blaze, while not actively involved in the production, encourages him in the album intro to stick to his vision, and Saigon complies instantly with “Come Alive,” orchestrated by DJ Corbett as a typical contempo rap/pop combo. If this crosses over, it’s a Trojan Horse rolling right into the courtyard of the record industry:

“Street Gospel” is more of the same, just replacing pop with soul (courtesy of producer Deli Beats and singer P. Jericho). “Sinner’s Prayer” is a touch more spiritual AND political (with actor Omar Epps having the best verse – additional food for thought for Saigon and fellow neo-politico Papoose) and sees Sai daring his own Tupac Shakur comparison: “I’m like the new Makavel’ with a lot to tell.”

Saigon does have a lot to tell. (‘The Greatest Story Never Told’ beginning to look like the ‘Neverending Story’…). He has plots that take surprise turns (“Deception”), has kind words for his baby mama (“Best Mistake”), has realistic nightmares (“Bring That”), and of course he’s got opinions (“Contraband 3”). What he doesn’t have is a cohesive sound that would make “The Troubled Times of Brian Carenard” a convincing album. Oh he’s got Primo on three tracks, but two of them make one marvel at the stuff that passes as Premier tracks nowadays. The Greg Nice sample is the sharpest thing about “Let’s Get Smart,” which is brought down for good by Saigon himself by phrasing it like one of those melodically overly simplistic KRS-One tracks. If you blast WorldStarHipHop for its content and suggest that rap smartens up after constantly dumbing it down, you better make sure there’s a bit of sophistication to your presentation. “One Foot in the Door” does feature the legendary Big Daddy Kane over Primo production, but apart from failing to live up to the billing, it also seems to be one of those type of songs Saigon should have grown out of. The co-sign (Premier also quotes Jay-Z speaking on behalf of Saigon) is a curious thing, even moreso as even posse cuts all seem to go wrong lately, “Mechanical Animals (4 Generations)” featuring Memphis Bleek, Lil Bibby, and Kool G Rap being no exception.

A track that brings us back to the music, considering Clev Trev’s misguided attempt to illustrate the song title with weird noises that are probably meant to be mechanical and animal at the same time. Also produced by Clev Trev, “My Mama Thinks I’m Crazy” succeeds, but guesting band Curbside Hustle probably deserves a part of that credit. In the end those tracks work best that stick to a basic, proven formula. The clever lyrical sweeping strike “Nunya (None of Your Business)” (the one where Primo doesn’t fumble). “Best Mistake,” a most mature exposition on joint custody disguised as a R&B throwback. In all its melodrama “Come Alive” would be a contender were it not for the racket of the experimental drums. In terms of the sound design and futuristic flair that its makers might have had in mind (if they had any vision at all), “The Troubled Times of Brian Carenard” sounds like a trial version of Goodie Mob’s “Age Against the Machine.”

Morally charged and rhetorically gifted, Saigon wants to carry the world on his shoulder. So far he didn’t fare too badly, but this may be where the series jumps the shark. Chapter 3 doesn’t have the highlights of the previous two, those joints that make you say, “DANG!” And although the album title suggests otherwise, this is not an intensely personal record – the kind rap has also seen. Saigon may not be as far removed from Pac as those who use his name in vain, but artistically he doesn’t exactly measure up either. The strongest mind can’t do it all by himself, and at this point it looks like Saigon is going to need some expert help to find his way back to making convincing hip-hop.