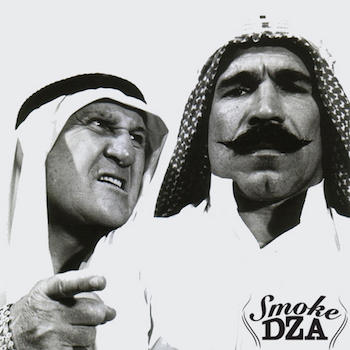 Every now and then theRapReviews staff will debate the merits of what belongs in the Back to the Lab category. Though the ostensible purpose of its existence is to look back at albums that either (A.) got released before the site was founded or (B.) got overlooked due to the overwhelming flood of hip-hop releases, it also serves as a calendar line in the sand that generally extends 12-18 months back from the current date of a review’s publication. We can’t easily lump a review of something on the shelf for a year in with new albums that just hit retail, unless the album has somehow been updated or re-released in a new format. This happens occasionally with mixtapes, especially if they get an “official” release.

That’s not going to happen with the “Ringside EP.” First and foremost the self-confessed pro wrestling fan DZA goes all out with the WWE (or WWE owned) samples on this five track DatPiff download. It’s possible that the up-and-coming rapper could afford to pay the sample clearance fees – but would you really put down that kind of cheddar for just eleven minutes of music? That’s the second reason this will never see an official release – it’s a clear bit of time sensitive fandom that was intended to drop the same day as WrestleMania 29, though according to DP’s own records it came out a day later. The real nail in the coffin of an official release (and this pun is definitely intended) is the opening track “The Streak.”

“Straight up
Hear the whistles when I pass by
Gave one of you niggaz a +Tombstone+
In case you ready for your +Last Ride+
You tried to get cure and it backfired
Ain’t that right?
Your b#%!# ain’t give you no ackrite
Who you think she curbed you for last night?”

DZA’s song full of puns for the Dead Man of pro wrestling is fun to listen to if you follow the squared circle’s soap opera, but when DZA says “they won’t end my streak” he didn’t andCOULDN’T have known that Brock Lesnar would in fact end it at WrestleMania 30 this year (even the bookies got that one wrong). For that reason alone if no other this review became “Back to the Lab” by default, because the album is forever dated by the perception Undertaker couldn’t and wouldn’t ever be beaten. It’s also a little chilling to hear samples of the late Paul Bearer at the end of the track – a fitting tribute to be sure – but Bearer had already passed away BEFORE WrestleMania took place. That had to give DZA and 183rd pause for thought before finalizing the track.

In some respects though the entire album is dated, and more than just by the year and change since CM Punk wrestled Big Evil. Every song is virtually a throwback to the 90’s, to an era when WWF and WCW battled for ratings supremacy, a battle which Undertaker was very much a part of. “Y2Kushedgod” samples the speech Chris Jericho gave when jumped ship from Ted Turner to Vince McMahon. “Wolf Pack” refers to the nWo faction that split off to feud with the rest of the nWo in red and black colors. Coincidentally which side of the feud Scott Hall was on was integral to WCW storylines in mid-1998, and the very next track samples both his Razor Ramon theme music and a “machismo” promo he cut in WWF before he jumped ship to WCW.

Even if you’re not a wrestling fan it should be fairly apparent that during the 1990’s, big money was floating around between the rival TV shows on rival networks, and wrestlers had plenty of incentive to follow the money to whoever could make the best offer – and that makes “Hollywood Smoke Hogan” a fitting note to end both the album and review on. Even though Hogan originally came to WCW hoping to continue his all-American red and yellow bandana good guy act from WWF, Southern audiences quickly turned on his shtick, and in a stroke of genius (no kidding) WCW turned him heel and paired him with Hall and Nash to create a stable that was “too sweet.” The Wolfpac split shows it eventually grew too big for its own good, as it literally hampered the ability of the writers to come up with anything to do – they “beat” their in-house WCW rivals at every turn. All of this makes for a fun trip down nostalgia lane, the kind you can enjoy on WWE Network (for an undisclosed monthly sum), but if you’re not the kind of wrestling head that Smoke DZA or I are this all goes OVER your head like his perpetual clouds of kush smoke. It’s an insular time locked album that while fun for me is too short and too narrow to make a bigger impact.