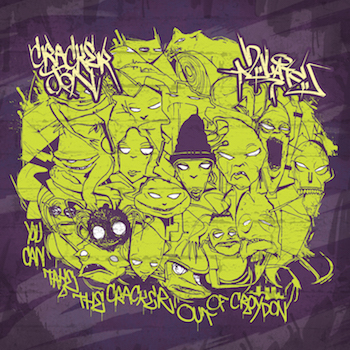 Cracker Jon is the latest in a line of MCs that inexplicably takes pride in being scummy, scruffy and an overall waster. Just as Dirty Dike and Smellington Piff have thrown out albums with content lifted from an episode of The Inbetweeners, Cracker Jon pitches his debut to the same audience, except there’s a depressing nature to this record that lends it a darker tone than the standard foul-mouthed bursts and self-deprecating rhymes.

For those not from these grey, rainy shores; Croydon is a large town in South London – a place as unremarkable as its name suggests. It’s just as London meets the county of Surrey, traditionally where the rich and affluent reside alongside the suits that commute to and from the capital. The picture painted on “You Can Take the Cracker Out of Croydon” is one that depicts the area as decrepit and as undesirable as the town in Hobo With A Shotgun. OK, maybe not that undesirable but Cracker Jon spends much of this album in tramp-mode – Steptoe with a microphone if you will.

Even the most mindless content can be forgiven if the technique is refined and delivered with precision. Dirty Dike is typically brash on “Obnoxious”, a track unfortunately devoid of the hilarity that made Immortal Technique’s song of the same name so enjoyable. The guys just say some obnoxious shit, with no intent of expanding from this theme that can be found in any of the other songs.

Much of the record follows this path and it quickly becomes tiresome, even when similarly squeaky emcees join Jon on “The Funk Off”. It’s a shame, because musically 2Late delivers some grimy production that sounds a bit like Erick Sermon’s work with Redman. Whilst the Funk Doctor can get away with spitting nonsensical rhymes thanks to his incredible charisma and outlandish character, Cracker Jon just comes across as a whiny white boy. It’s not just an annoying listen, but a sad waste of some worthy instrumentals: “Dank” is crying out for somebody that can ride a beat with its pounding bass.

This album reminds me of Rick Ross. Of course, it’s the poor version of Rick Ross – in both definitions of the word – Cracker Jon’s character is Rick Ross with a crap credit rating. Even though Rick Ross spits some inane lines about his latest purchases, at least there’s evidence of flow and an ability to stay on beat. Production values aren’t necessarily bad, but aren’t good enough to justify listening to the whole album. It’s a lot like listening to a cipher session in the queue to a hip hop concert – topics rarely veer from drinking, drugs and being pissed off.

Granted – those themes have made for some great records but “You Can Take The Cracker Out of Croydon” is an album that’s so pedestrian that it fails to register. Cracker Jon is sadly lacking in flow and content, and has one of the most monotonous voices on the scene. To quote J-Live, “if you’re not saying shit, I’m not listening”, and it’s difficult to recommend an album full of nonsense.

Cracker Jon :: You Can Take the Cracker Out of Croydon
4Disappointing
Music5
Lyrics3