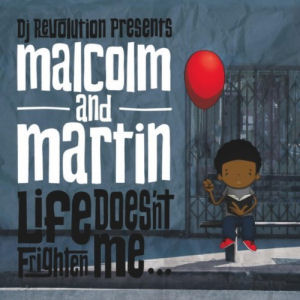 “You know they gonna start another war again
We got a few good men, but there’s much more of them
And I doubt we’ll see another Martin or Malcolm
cause the rims and the blings have distored the outcome
And how come we’d rather floss than get our souls right?
Still some stay up hustlin’ the whole night
I guess that’s why we got war in our own hoods
cause we can’t even save ourselves for our own good”

Martin Luther King and Malcolm X are two of the most iconic figures of 20th century black America. Both dedicating their lives to a greater cause, each choosing a different path to reach his goals, but both meeting the same tragic fate. The lives they lived and the decicions they made reflect the range of human life. One followed in his father’s footsteps and became a clergyman before discovering his mission as a civil rights activist, the other had to pay his debt to society behind bars in order to find his calling. One argued from the point of Christianity, the other chose a non-Christian faith to emmancipate himself and his people. One had an academic background, the other drew experience from the streets and prison. One marched his way into the mainstream, the other remained a political outcast.

King and X have been present in rap music, even regularly being mentioned together in songs. The references are occasionally trivializing (Drake) or presumptuous (Benzino), but generally the two serve as examples of great leaders that are sorely missed. Some rappers stress the differences, most famously 2Pac, who asked: “No Malcolm X in my history text, why is that? / Cause he tried to educate and liberate all blacks / Why is Martin Luther King in my book each week? / He told blacks if they get smacked, turn the other cheek.”

Agree with this assessment or not, the militant Malcolm has proved to be more influential to rap music. Beginning with the 1983 Tommy Boy release “No Sell Out” by Keith LeBlanc, which used excerpts from speeches, and extending even into the visual realm – from Boogie Down Productions’ “By All Means Necessary” cover and Gang Starr’s “Words I Manifest” video to T.I. (4/09 Vibe cover) and Young Jeezy (“Trap Or Die II” cover) re-enacting Malcolm X photographs and poses more recently.

Rappers KB iMean and Styliztik Jones attempt to bridge that gap by teaming up as Malcolm and Martin, hoping that the alias evokes some positive role models for a change. The concept is a loose one. You won’t hear KB and SJ assume the role of either leader, or pen biographical songs. Neither do they discuss the differences (the way Spike Lee juxtaposed their positions in ‘Do the Right Thing’), although there are some scenes of violence yet no explicit nonviolent stance. At the same time, to divide King and X along the pacifist/militant line would be ignoring that Malcolm, by then Malik el-Shabazz, revised some of his views fundamentally in his later years.

Malcolm and Martin don’t give those things too much thought on “Life Doesn’t Frighten Me…,” they are concerned with proving their worth on DJ Revolution tracks and rekindling rap music’s socially-conscious and political bent. “Lunchtyme Cyphers” finds them discussing education system issues over the lunchroom table: “Saw the school nerd put a gun in his locker / He sick of gettin’ beat up cause he wanna be a doctor / Bullies take his lunch money goin’ all up in his Dockers / The school counselor never talk about no colleges / told my girlfriend that she should be a cosmetologist.” “Bamboozled” decries a shallow rap scene, “Thank God” runs down a family tree of African-American icons, and “Heritage” calls for black and brown unity – guests Bambu and Apakalips join Styliztik, who kicks off the plea compellingly with “Mandingos didn’t beef with the Mayans, mayne / so we gotta roll thick as a lion’s mane / Aztecs and Zulus, both tribes the same.” “Against the Wall” deals with the plight of the common man, while “Win Or Lose” and “Hustle” put emphasis on succeeding and getting ahead.

What takes these tracks to a level of excellence is their execution. Few newcomers would be able to pull off “Sista Big Butt” in such vintage fashion, combining comical highlights with a serious undertone – plus do justice to the original (Jean Knight’s “Mr. Big Stuff”). Both rappers, working together since high school age, flow effortlessly over the beats crafted by DJ Revolution, himself a highly experienced hip-hop musician able to orchestrate an album with a rich palette of (musical AND vocal) samples – to the point where Malcolm and Martin is not only a credible tag team effort but actually suggests a longer committment from both the rappers and their producer. Whether it’s the breathless rush of “Hustle,” the combination of Curtis Mayfield sorrowfulness and sharp drum programming on “Back Against the Wall,” the interaction between soul samples and rappers on the inspirational “Win Or Lose,” a lot of things fall quite naturally into place on this release.

It occurs that Jones and iMean (vocally a deadringer for Joell Ortiz) fail just as they try to show off their lyrical prowess. They do have their superior flows and DJ Rev tracks (and one Marco Polo beat) to fall back on, still offerings like “Welcome to the Movement” and “Movement Music” seem irrelevant (even moreso as the reviewer remembers Random’s commentary on MLK and today’s rap ‘movements’ on his “Heroes, Volume One” release). The metaphor of “Black Coffee” doesn’t quite unfold to its full potential, and “Ain’t Seen Nothing Yet” exemplifies their sometimes aimless writing. Nevertheless, with tracks like the instrumental “Do it Again (Rev’s Groove)” and the chin-checking Torae feature “Bare Witness,” “Life Doesn’t Frighten Me…” has yet more aces up its sleeve.

Appropriate or timely or neither, a name like Malcolm and Martin does send a strong message. While they have yet to disclose the bearing of dead prez or The Coup, the LA trio should not be ignored. As Styliztik Jones puts it in the opener – M&M “never follow anybody, this is leader rap.” Feel free to follow.