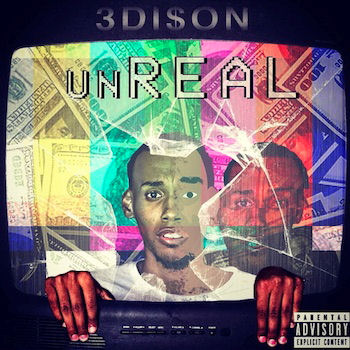 99 times out of 100 I can track down a reason I have an unopened zip file with a rap album inside. Most common reason – a publicist has managed to convince me to download a promo copy of their artist’s new album for review. (Better than 50/50 odds I was already familiar with said artist). Slightly less common – one of our loyal readers has suggested something to me as a “can’t miss” that we should be covering on the website. I walk a fine line with both because digital albums are so widely available to reviewers you can easily/quickly get overwhelmed by unopened albums.

3di$on’s “unREAL” falls into that third and most uncommon category of reasons – NONE AVAILABLE. I can’t find a press release, an e-mail from a publicist, a suggestion from a reader or even (and this happens often) a direct message from the artist imploring us that THIS ALBUM IS DIFFERENT and worth our time. The humor of that missive is that it’s usually filled with comparisons – “a little Kendrick Lamar, a little A$AP Rocky, like a young LL Cool J in his prime,” whatever. I can’t even cite that to you as a reason I have “unREAL.” It exists, and that’s all.

Ultimate I had to resort to Google to figure 3di$on out. “unREAL” is a free download from AudioMack. 3di$on describes his style as “conscious turn-up music for the O.G.’s.” He’s from Sacramento, California. Even though the album is free he’s got one music video out for the song “Rise and Shine.” 3di$on winds up unemployed and broke as a joke, but apparently at the video’s end he and a friend are convinced to make a come up “Grand Theft Auto” style.

The video is “to be continued” though so we’ll have to wait to see if they plan to program a dope video game, or try to actually make a jack move like the one in the game itself. (If they turned out to be software designers that would be one hell of a plot twist.) Money is a unifying theme for “unREAL” – wanting it, having it, figuring out how to get it or spending it. “REM” even suggests that 3di$on is losing sleep over it, while the album’s closer “Time Is Money” suggests that 3di$on is unwilling to put in the work if there’s no reward for it (a little ironic for a free album). In 3d’s life everything has a “Price Tag,” which is also one of the album’s best tracks, with a chopped and reversed jazzy backdrop courtesy of Rashaun. I also dig the lyrical shoutout to Ahmad in verse one.

I can’t tell you how or why I came across “unREAL,” but I can tell you that unzipping the file and playing it was worth the time. 3d’s working with some good producers – I like the electronic melody and heavy bass ENON provides on “Liquor Store,” the Memphis style ring Nizzy J gives to “Grindin'” and the atmospheric boom of “Riches” featuring Devon Sanders courtesy TeoBeats. 3d’s probably as tired of every new rapper from Cali being compared to Kendrick Lamar or ScHoolboy Q as I am, but at least it’s safe to say that it should only be used for rappers who have hot beats and above average lyrical skill. 3d doesn’t always hit the mark – lines like “hoes’ll turn more tricks than Evel Knievel” are a bit played, but he redeems himself with thoughtful raps like “I’m racin for better placement and, along the way I heard ’em say be careful what you chase, money or mistakes they end up in the same place.” That’s a strong run of assonance that shows a lot of thought goes into 3d’s wordcraft. I’d keep an eye out for this Sac-Town native.