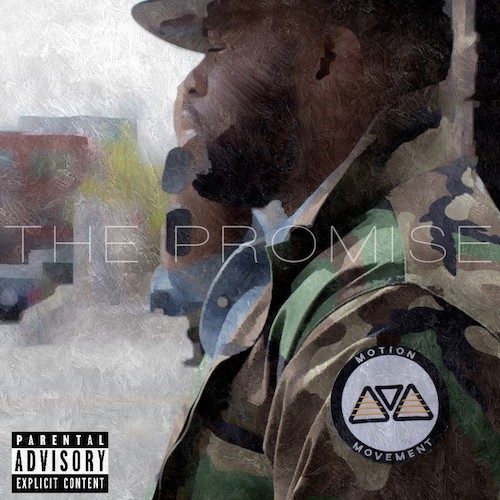 We live in an age of uncertainty, where almost nothing is guaranteed. That also holds true for hip-hop artists. How many times have we heard emcees declare that they’re retiring from rap, only to show back up a year or two later? How many mixtape rappers hustling from out the back of their car trunks swear that their mic skills are “fire” when they really aren’t? The answer to both questions is “too many”. A guarantee is only as good as the person who makes it, and those who deliver are part of a small, but honorable minority. Very few stand by their declarative statements, including those who continue to espouse “hip-hop is dead”. Canadian emcee Dayne Hall, who goes by the stage name “Haz” (that’s “has”, not “haze”), counters back with a declarative statement of his own: “The Promise“. His third album in a three-year period, “The Promise” has a do-it-yourself aesthetic to show that Haz is “one of the very few artists who keep lyricism and content at high priority.” Hearing this album in its entirety several times has indicated that while, it’s not a perfect album, it does possess a well-roundedness in both the lyrics and the music.

The beats were carefully picked and chosen by Haz to reflect his promissory mind state. To start things off on “The Promise”, the title-track serves as an introduction to the man himself. From the jump, he lets you know what you’re in store for over a soulful beat. It’s one thing to have a sick pen game, but that means nothing without an equally sick spit game. In Haz, you’ve got both. He makes use of a different flow over “Thinking Out Loud”. Employing a double-time flow over an atmospheric beat, the lyrics seem very stream-of-consciousness and autobiographical (“rudebwoy etiquette” as Haz calls it). “Can You Feel It” is a sample-based beat comprised of a piano and horns while some dope DJ record scratching make up the hook. In three verses, Haz’s message is “the people you affect is how you measure your greatness.”

Not one to shy away from love, “Mood Ring” starts with a peculiar bassline, then some slamming drums and female vocals singing “HIGHER!” He raps a detailed narrative about how love changes things, including and particularly emotional moods. Haz has demonstrated a penchant for wordplay and wit, but there’s a more pronounced humor in him on the track “Grey Poupon”. The beat is dope, and the snares hit with that boom bap sound while Haz vows to make listeners “stay in place like soccer cleats.”

The production goes the route of vintage soul on “You Gotta Love It”. It’s like something reminiscent of “The Blueprint”, especially when Haz spits “got Yeezy confidence, I been that way since I was ‘Ye high.” If there’s a weak track on here, I’d say it’s “Solemnly Swear”. It’s synonymous with the title track and the low-key reflective beat doesn’t do much for this listener. Now “Pain and Pleasure”? Here, it perks back up with its piano-driven beat and contemplation about success in a business as fickle as rap. The hook is very melodic as well.

“Exfoliate” sports one of the best beats on the album. It’s the most head-nodding and the drums here are the hardest. Haz has flow and effortless multis in the first verse, and humorous ad-libs about the song due its less than 3-minute length. “10 Different Ways” works as a concept song: An indy artist schooling those who want to get involved in the rap game. It’s not just about record industry survival, but it’s more about hip-hop history for the younger generation who have no prior knowledge of this culture that they’re trying to squeeze money out of. Things get serious on Haz’s take (not cover, mind you) on “Hey Young World.” Starting with newscast samples about American gun violence and terrorist attacks, the beat is boom-bap, but has a somber backdrop. Lyrically, Haz challenges listeners to “push yourself to the limits until you’re limitless”. It’s about staying positive despite the violence of the world. The serious tone is continued on “Sworn Legend”. A frantic beat forces Haz to change his flow to match it, rapping social commentary about the fear of the Black man.

The album’s closers are “If It All Faded” and “Broken Promise”. The former has a female singing the hook while Haz admits he’s a starving artist, but wants to know if those around both him and his accomplishments would disappear if he didn’t have them. He conveys a vulnerability in his admissions. The latter is a good bookend with a jazzy piano-influenced beat to wind things down. Overall, I enjoyed “The Promise“, as it’s been presented by an emcee who’s fully aware that the rap game is prone to being peccable, but he’s poised to do his part to change that.