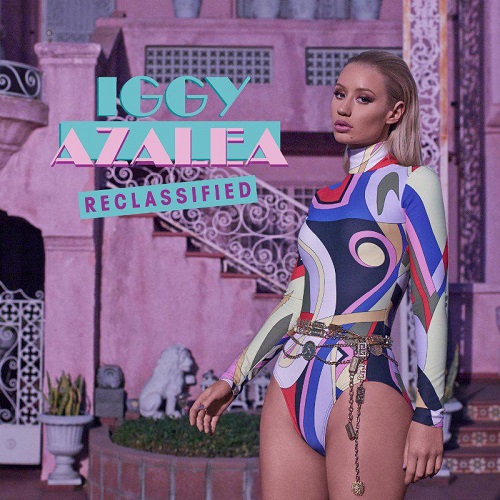 Well, I’m as shocked as you’re probably about to be, dear Reader… I wasn’t expecting this. Having listened to “The New Classic” two or three times upon its release, it made very little genuine impression on me – Matt Jost summed it up perfectly in his excellent review, one that I thoroughly concurred with. But then, the Australian rapper and her team made a series of startlingly intelligent decisions: take the best songs from “The New Classic”; get back into the studio with experienced pop producers The Invisible Men; churn out some bonafide hits; repackage it all into a twelve track, forty-one minute album; call it “Reclassified.”

I’ve been listening to “Reclassified” for a few weeks now, and while Iggy Azalea won’t end up as the greatest rapper alive, it doesn’t stop this from being such a FUN Hip Pop listen. There is meticulous attention paid to every instrumental, chorus, ad-lib… And you end up with hit after hit after hit. There have been around seven singles thus far, and “Heavy Crown” is sure to be another. They work to varying degrees artistically – and some definitely take time to grow, like “Iggy SZN”. The beats at times mechanically ape the work of more renowned producers (e.g. “Fancy”), but the proof is in the pudding. Songs like “Work” spring to life in this context – it’s a criminally underrated track with a majestic feel, and you can’t help but get swept away with the “No money, no family, 16 in the middle of Miami” line. It’s worth noting that on “The New Classic”, it made little/no impression on me but there’s a massive difference between placing it as the seventh track and the second. On “Reclassified” it demands your attention, it sets the entire album up so nicely and for someone like me that barely paid any attention to Azalea, it grabs me, shakes me and makes me take notice.

It helps being preceded by an interesting opening cut – “We In This Bitch” – that reminds me of some Foxy shit, that kind of moody Mafioso streetwise shit that hooks you in. Of course, it’s Iggy Azalea rapping and you’re unlikely to forget that in a hurry – she sounds like, well, a Nineties Baby rapping (statistically, most rappers don’t find genuine success until they are around 26). The Aussie has clearly worked hard on her delivery, but she’s got a long way to go when it comes to top level rapping ability. But for now, she’s making the most of her strengths and on songs like “Change Your Life” she by no means sounds out of place next to T.I. It’s also worth noting that compared to someone like J. Cole, Azalea’s back story is infinitely more interesting, even if she’s only sporadically found the right way to exploit it.

“Beg For It” is a bit too similar melodically to “Fancy”, but that’s still a compliment by association – it’s a solid number, and is followed up by “Black Widow”, a track that I couldn’t abide before but has genuinely grown on me (why did I doubt you, Stargate?). “Trouble” features Jennifer Hudson and is a touch too cheesy, but it’s followed by a couple of the better cuts from TNC: “Don’t Need Y’all” and “Rolex” which are sombre and reflective, adding a touch of balance to the relentless parade of pop.

“Iggy SZN” livens things up – it’s somewhat clunky but effective, helping to set up the genuine worldwide summer smash that was “Fancy”. It’s completely understandable that DJ Mustard accused Iggy’s producers of ripping him off. However, while Mustard worked hard to create a strategy, he didn’t invent that sound. I sent his album “10 Seasons” to a friend recently, who instantly replied with: “Oooh nice, he’s bringing back that West Coast sound we grew up with.” Game, set and match. “Fancy” is the definition of an inescapable hit, but in my mind, a thoroughly welcome one that does the job on every level perfectly. Before the final track – the pulsating dance track “Bounce” – comes “Heavy Crown” featuring a gem of a chorus from Ellie Goulding. When Iggy screams: “To everyone who said I’d never make it, Oh Lord, weren’t you mistaken!” you kinda start to believe in her. The whole album is a statement of intent, and sets her up nicely for the next phase of her career.

She’s young, successful, tweets with goofy abandon and has a massive target on her back. But there are much more specific reasons as to why Iggy Azalea is the current scapegoat for all of rap music’s ills: she’s white; she’s female; she’s Australian, rapping in an American accent; and there are rumours she’s had ‘help’ writing certain tracks. But let me say this as clearly as possible, because I could not give a fuck: Hip Hop is racist; Hip Hop is sexist; Hip Hop is xenophobic;

OK, she’s Australian rapping in an American accent – but she came to the States aged 16, she would have been influenced by her favourite rappers and it’s natural, plus the Australian accent is simply not commercial viable (hell if Americans can barely handle British accents rapping). And as for Nicki Minaj’s incessant insinuations about Azalea not writing all of her own material – well, people in glass houses… Minaj doesn’t write her own choruses, and while in Hip Hop, not penning your own raps is a sin, plenty of your favourite rappers have been guilty. It’s also worth mentioning that Minaj is eight years older than Azalea – if the young Aussie has had help, at least it’s she has time on her side so that she can progress on her own terms.

Look, this isn’t “Illmatic” and it’s not pretending to be. It’s a bunch of Hip Pop singles, a collection of fun energetic tracks that make a solid gym album. The music is clinically on point, and the choruses are almost all brilliant. Hip Hop Heads all cling to the rapper’s lyrics being the most important thing but newsflash: 90% of the world cares far more about the music and chorus than actual lyrical ability. This is where “Reclassified” nails it. It’s a really enjoyable listen that might not last the ages, but if you relax a bit, let it wash over you and appreciate what it is rather than what it isn’t, then maybe – just MAYBE – you might like it as much as I did. Stranger things have happened.