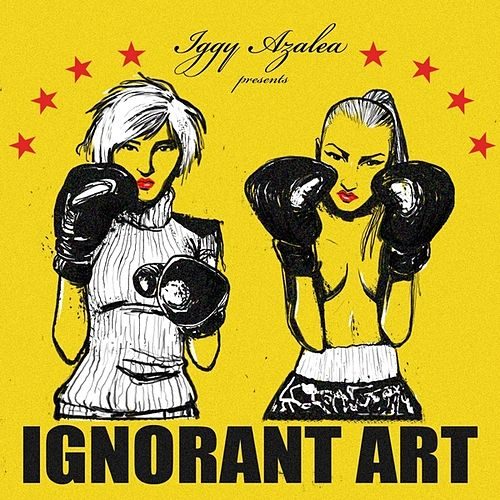 Iggy Azalea makes a very reasonable statement on “Ignorant Art”: “My time will start today / Nicki paved the way.” She quickly adds the names “Kim, Foxy, Eve,” but Nicki Minaj is unquestionably the main reference point here. Iggy Azalea is a creature of the digital age, using the internet as a source of influence and as a tool to build her image and her fanbase. Her four videos of original material (“D.R.U.G.S,” “Pu$$y,” “My World,” “The Last Song”) are eye-catching compositions whose star may strike ubiquitous model and rapper poses but also exudes actual natural confidence. The visual element is an integral part of her performance, adding a dimension that just wouldn’t be there if you only listened to the music.

Looks and sounds have always been closely intertwined in pop music, but female artists tradtionally experience more pressure to project an image. Some have been able to take control and used the premise to look presentable to their own advantage, most famously Madonna. Stylish female rappers are nothing new either, but they usually didn’t get very far. Which would corroborate the traditionalists who would like to believe that it’s still mainly the music that excites people. But there’s just no denying that you do get an extra kick out of watching Nicki Minaj or Iggy Azalea videos. The mixtape to go with Iggy Azalea’s genesis is therefore not her main claim to fame. Still some sort of official collection of your work is crucial if you’re hoping to be more than just an online celebrity and strive for an actual music career.

“Ignorant Art” starts off intriguingly enough, with what can only be described as a parody in which a misogynist male acts as a spoken word poet. “Hello,” the first actual song, is heavy on swag and light on lyrical prowess and already she evokes comparisons to Ke$ha with an affected enunciation and simplistic wordplay Ã  la “Blonde / but please don’t think I’m dumb” or “You’re not lookin’ too good, and that’s too bad.” Sadly, open hostility towards other women is female rap tradition, and Iggy Azalea follows the tradition by calling out “ugly bitches” and “dummy bitches.” While Kreayshawn dismissed name-brand clothes on “Gucci Gucci,” Iggy is every bit the fashionista her elder rap sistas were: “You’re not on my level, you’re not even close / And these are Ferragamo, baby, what the fuck are those?!”

That doesn’t prevent her from referencing Kreayshawn, turning “One big room full of bad bitches” (a line from “Bumpin Bumpin,” sampled in “Gucci Gucci”) into “White girl team full of bad bitches” on “My World.” Strangely, Kreayshawn may run with a White Girl Mob, but Iggy invites black extras to pose with her in the video shot in South Central Los Angeles. While there’s a lot to be analyzed in that clip, the song “Pu$$y” is a straight up rap tune, from the opening snippet of Grace Jones in ‘Boomerang’ to a rapper talking about her private parts.

Let’s be honest – stuff like that isn’t really controversial anymore, it just produces YouTube views. Iggy Azalea comes up in a strange new world where it seemingly doesn’t matter if you’re white or black, boy or girl, gay or straight – but then again it sort of does. As the online population grows in size and density, it becomes increasingly important to let the world know who you are. Young artists don’t attempt to surround themselves with an aura of mystique, they are keen to fill out their personality profile to find ‘friends’ and get ‘likes’. On “Treasure Island,” Iggy sends “shouts to all my gays” while on “Drop That Shit” she compliments a stripper, “Damn, baby got the fattest ass / I ain’t gay, so problem is I have to pass.” There’s even less ambiguous coquetry in that than in Katy Perry’s “I Kissed a Girl.” It’s defining an identity with the simplest of schemes, see also the “Hello” line “If I was a dick I would be hard – but you would make me soft.”

And so Iggy Azalea can strut her stuff while penning romantic joints on the side like the Dave Matthews Band-sampling “You,” where she is the self-respecting and respectable girl modern society expects her to be:

“Searchin’ for a dude that could call me wifey
Ready for the ring, just maybe I might be
Never been a slut, I don’t care who like me
I could count on one hand all the dudes that’s piped me
[…]
I know what I deserve, I demand the bestest
That’s why all my past dudes’ names is exes
Keep that thing in your pants, I don’t need your sexes
Better come correct when you step to a princess”

That’s definitely girl rap territory, established more than twenty years ago. And halfway down that line Foxy Brown was talking about her “Ill Na Na.” And much further back goes the inappropriate behavior clichÃ© she evokes with her “Curse like a sailor” confession. She saves her most nuanced effort for last, engaging in reflections on love and relationships on “The Last Song.” Iggy Azalea’s saving grace musically is the fact that she can flow. Sometimes she lapses into the forcedly ‘retarded’ flow of her peers, but she does a nice staccato and can switch up if required, adjusting to the changing tapestry of “Backseat” or slowing down to a southern drawl on “Treasure Island.”

Iggy Azalea is the product of many influences, many of which can be subsumed under American rap music. Insiders may find it ironic that she had to leave her birthplace Australia at age 16 to pursue her dreams, but fact is that male rappers like Jay-Z, Lil Wayne and Drake, or females like Nicki Minaj, Eve and Lil’ Kim are universal models whereas the Australian hip-hop scene probably has a limited reach even on its own territory. With the help of the internet, Azalea can recruit her troops all over the globe: “Get your tats, get your shirts, let the world see / who runnin’ this, let ’em know you belong to me.” Having since signed with Interscope, it seems like she knows what she’s doing. So ‘ignorant’ probably isn’t the right word. But neither is ‘intelligent.’