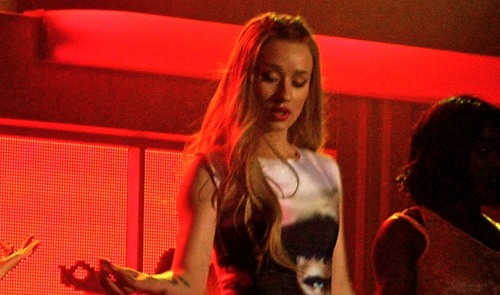 Iggy Azalea has become one of the most talked about names in hip-hop, so when The New Classic

Tour (presented by Monster Energy) hit NYC RapReviewsrolled through to see if her skills matched the hype surrounding her. Here’s what we learned:

1) She’s very at home on the stage

When an artist is having fun, it’s generally pretty contagious, and when Iggy Azalea is on stage she looks like she’s having a great time. For this particular tour her stage is set up with a unique backdrop. Yes, hip-hop purists will say all anyone should need are two turntables and a microphone, but a nice backdrop, in this case an entrance to a fictional Hotel Iggy, makes the entire experience more visually appealing (not that Iggy isn’t visually appealing on her own!). Also, and I write this with a nod to the purists, it packages her less as a hip-hop artist, and more as a pop star, which I think makes a lot of sense, as she has quite a few pop star qualities (her look, her demeanor, her use of backup dancers), and pop stars sell a heck of a lot more records than most hip-hop artists.

During her set Iggy never fades into the background created for her, as she works the entire stage, smiling the vast majority of the time, seeming genuinely flattered that so many people have come out to see her. Her attitude on stage is endearing, which is why when she makes the occasional mistake during her performance, you’re a little more willing to forgive it. Speaking of which…

2) She’ll occasionally rap over her own vocals

This would be one of those mistakes. I don’t think I need to get too high on my soapbox to explain that rapping over one’s own vocal track is a performance crime of the highest order. What made Iggy’s rapping over her own vocals downright odd, however, was that the songs she did it for didn’t have the most complicated flows, or require her to move around a lot. It was almost as though she had a few songs she wasn’t completely confident in her ability to remember. That being said, her audience didn’t seem to mind, or even notice. This is another instance where the pop star vs. hip-hop artist delineation can be made.

While, much like Lorde, I’m kind of over getting told to throw my hands up in the air, and I was happy to see a show devoid of such performance cliches, I would have liked for Iggy to interact with the crowd a little more. For someone who oozes so much personality while performing, it was strange that she chose not to speak with the audience very much. Her set was rapid fire, partly due to a half hour delay because of a technical issue (she went on at 9:30pm instead of 9pm, which is still ridiculously early when we’re talking about hip-hop time), and although I’m sure she wanted to get her entire set list in, cutting one or two of her lesser known songs, and using that time to talk with the audience, and tell a few stories, would have made the night feel a little more personal, and created a bit more of a connection.

The day of the show I hit up a buddy of mine who’d worked with Iggy to ask if he’d be there. When he told me he wasn’t going to be in attendance I replied I guess it would just be me and a bunch of underage girls (the show was 16+). He added that there would also be a plethora of gay men. I thought he was kidding, but when the show started I realized he hadn’t been joking in the least. On either side of me were groups of teen girls taking selfies, and gay couples enjoying a night out. Iggy Azalea might be one of the first rappers to manage to hit Bravo’s target demographic.

5) You probably won’t buy a t-shirt

Iggy’s merch table had three t-shirts available, all of which looked pretty nice. When I asked the person behind the table what the price point was for the shirts (because apparently I wanted to ask “how much are the t-shirts” in the douchiest way possible), he replied they were all $40. Yes, that’s just $10 away from Macklemore’s “that’s fifty dollars for a t-shirt” admonishment from “Thrift Shop.” It’s also $10-$20 more than the vast majority of concert t-shirts I’ve seen over the past few months (and I’ve seen A LOT of them). For $20 I would have worn a Hotel Iggy shirt to the gym. For $40, I decided to have another drink, and save the majority of my money.

In an unrelated story, I was mildly offended that the free condom people next to the merch table ignored me multiple times. I was tempted to walk by rapping ODB’s “Shimmy Shimmy Ya.”

If you enjoy Iggy Azalea’s music you will more than likely enjoy her live show. If you aren’t a fan, however, I’m not sure what you’ll see will sway your opinion all that much. She’s clearly at home on the stage, she just has a few kinks to work out before her performances are on the same level as her love of performing.