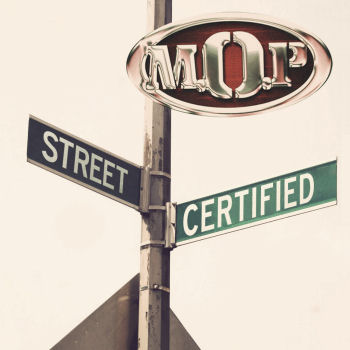 As the years go by and I gradually turn in to a boring, old git, my taste in hip hop has (naturally?) gravitated towards more mature, content-driven music. Even though 28 isn’t an age too old for anything (except maybe claiming child fare on the bus), I could stop listening to many artists that curse or claim to do horrific acts of violence, but not M.O.P.. They spout some horrid lyrics on their latest effort, perhaps some of their most brutal rhymes to date, and that’s saying something. The Mash Out Posse are an intense presence, possessing an unmatched level of rowdiness that can make the softest beat sound like a rallying call to soldiers about to engage in warfare. M.O.P. is music to lift weights to, music to headbutt the postman to â€“ hell, it’s probably caused a car crash or two. I love it, and while some purists will argue that Billy Danze and Lil’ Fame are actually strong lyricists, it’s their style that remains their strength.

Sinister pianos make up “Heistmasters” and “187”, two tracks infatuated with firearms. The latter in particular is the best M.O.P. song in years, with Danze following up his Jay-Z dig on “Welcome 2 Brooklyn” with some scathing violence to women:

“Show up at the office whilst you’re having a conference
deliver the Rambo to all of your sponsors
groupie niggas can get it too
for sucking the dick of a nigga that’s got more bitch in him than you
part of the problem, I’ll tie you to the back of the ‘lac
and drag your ass by your red bottoms, BITCH”

The thing is, it never feels serious. Billy even cleared this verse up on YouTube, citing it as a rhyme not to be taken seriously. You really think he tied a female to his Cadillac and dragged them down the street? It’s vivid imagery that’s so over the top, you can’t help but go “DAMN BILLY, YOU CRAZY”. Saying that, Fame then drops this:

“This nigga flashing fifty grand,
walking round here looking like food for the wolves, listen
Illuminati rap? We don’t ride to that
everybody poppin’ Molly, look at how they act
y’all swag, the whole place emotional
wake up and find some dude Frank Ocean’ed you”

M.O.P. are all about that masculine, alpha male persona, so it’s to be expected that they aren’t going to be rapping about LGBT issues. Nevertheless, some of the content will inevitably divide listeners and I’m sure the anti-gay content wasn’t as present in their earlier work. Using Frank Ocean as a term for gay sex (or even rape) is certainly pushing the boundaries of taste but then there’s nothing politically correct about “Street Certified”. It’s very much music made by artists from a different generation, ones that have been so hard for so long now, that I can’t take the lines aimed at gays seriously. Soft, effeminate behaviour is frowned upon, and if you can’t handle that, then why the fuck are you reading an M.O.P. review? They haven’t cleaned up their act, and I’d never want them to.

“Street Certified” is let down by its biggest names. Busta Rhymes spits a horrible verse on “Broad Daylight”, a collaboration equally let down by production that’s at least ten years past its sell by date. Mobb Deep can’t save the choppy instrumental of “Street Certified” (the song), a track that just exists without ever hitting the mark. The reason I enjoyed this EP from M.O.P. lies in the solo songs, particularly the ones with vicious piano loops. “Hustle” is further proof that the Posse can still sound rugged over a track that has a sung hook, regardless of the redundant subject matter. “Heistmasters” and “187” follow the same formula and bang nicely. There’s a morbid quality to these songs that was unfortunately absent on their last album “Sparta” – which overloaded the listener with pounding Snowgoons production. Despite this EP being a similar length to the Snowgoons album, it’s not quite as consistent and will probably be forgotten by many by this time next year, which is a shame.

The long-rumoured M.O.P. x DJ Premier album is what we all want next, and seeing Preem provide scratches on the single “187” hopefully hints that it’s incoming. “Street Certified” serves as a reminder that Billy and Fame still sound as scathing as they did when they debuted twenty years ago, and provide a refreshing slice of rugged hip hop that few are capable of in 2014.