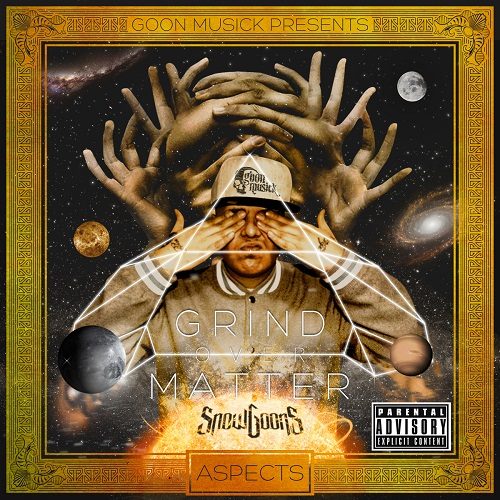 I don’t know Aspects. Well, I do know a British crew named Aspects and half-way hoped “Grind Over Matter” to be a new release of theirs. Turns out Aspects is one guy, and from the sound of it a member of the younger generation. The solo rapper with a plural moniker joins an ever-growing list of contemporary artists with unimaginative handles. More distinctive is his provenance – Ottawa, Canada. Aspects made a few chance appearances on Snowgoons releases in ’12 and ’13, but what exactly distinguishes him to the point that he deserves his own Goons-produced album escapes me. Besides the German-Danish production titans he also hooked up with a whole lot of superstars, to the point we rightfully have to ask ourselves – is this still Aspects’ house?

At least the opener is all his, even if it’s only “Just a Lil Bit.” A frugal track in Styles P tradition, Aspects rattling – fairly precisely – down a list of his bare necessities and some casual boasts over laconic but melodic production. The next voice you hear is Ghostface Killah’s, introducing “What You Get Now” while Mariachi-type horns blare in the background. He returns after Aspects kicks a perfunctory verse, automatically taking the track up a level. Cody Coyote, another Ottawa representative, pulls the curtains.

As far as unusual collaborations go, the fun has only just begun. “No Mo” features Young Buck and Celph Titled. Now these are not two rappers you’d normally expect on the same track, but anything is possible on a Snowgoons project, so be prepared for more sharp contrasts. “Wulocks” might look like another way to spell Wu-Block, but instead of The LOX/D-Block, another ’90s New York collective is represented. Armageddon of Terror Squad fame teams up with Raekwon under the guidance of a Killah Priest hook. Coincidentally or not, Punchline namechecks Terror Squad in “Hip Hop Circus” as he joins Aspects and Hussein Fatal railing against today’s rap scene. Meanwhile Wu-Block commander Sheek Louch leads “This Life,” which also features Ottawan Swisha-T. A few tracks later Fatal returns and brings along Mopreme Shakur, Pac’s step-brother and member of Thug Life and Outlaw Immortalz. Need I mention that M.O.P. are on this thing as well? Definitely worthy of mention is the appearance of Bizzy Bone, who totally owns “Gambling Man.”

Where does that leave Aspects? As expected, not center stage – although he often occupies the middle part of a song. One way to literally push himself to the front of that crowd would have been to go first on the majority of the tracks, but the contrary is the case. I’m thinking of another underground youngster who similarly hustled his way into the upper echelons of East Coast rap – Termanology. Determined/desperate to run with the big dogs, Term paid his dues and eventually earned our respect. Aspects, for now, seems to hope that the star power rubs off on him or at least allows for a successful debut. The plan backfires badly as he has to constantly reintroduce himself on his own album. Coming across like a boy in the company of men, you’ll have already forgotten about him whenever he comes on again but you’ll generously let shorty do his thing before the grown ups continue.

Point blank, Aspects does NOT hold his own on “Grind Over Matter.” His solo tracks are the most mundane ones (from title to vocabulary to content). He lectures hip-hop on ‘keeping it real’ and disses “all this swag and these fags in these skinny jeans,” but it’s the kind of critique that rings hollow when delivered by a relative newcomer. He’s lucky to rap over somewhat inspired beats while he’s acting like a goddamn rap conservative. But it certainly fits the essentially juvenile appeal of the release and its rapper whose lyrical imagery is limited to similes Ã  la “I’m gettin’ head like decapitation,” or “Sparks fly like the 4th of July,” or “They rollin’ with pussies, I’m rollin’ with dogs.”

To Aspects’ credit, his flow is fairly solid, also at a higher tempo. There’s variety in his vocal performance, all in a range between aggressive spitting and pensive cantillations. He regularly considers his partner in local crew Blocwize, Paragraph, or, as seen with Cody Coyote and Swisha-T, other Canadians. Even the established Madchild finds his way onto the album. Also, one of the perks of having that Snowgoons connect if you’re a no-name is that they can hook you up with bigger names. I wouldn’t even rule out that Aspects did some of that networking himself, Blocwize having collaborated with Billy Danze already three years ago. By the same token, production-wise, “What’s Good” featuring M.O.P. and Sicknature could easily be ten years or older with its overzealously powering neo-boom bap sound. It’s far from the only dÃ©jÃ -vu. What the Snowgoons are continuously good at is recycling beat blueprints others have originated. Add the prerequisite but often random vocal scratches and you have the equivalent of formulaic rock music based on the same old guitar riffs.

Of course a certain level will always be guaranteed when the Snowgoons are involved. A good number of beats here will absolutely satisfy East Coast connoisseurs, provided they’re not too much bothered by expiration dates. But the only outstanding performances on “Grind Over Matter” come from Bizzy Bone on “Gambling Man” and Fatal Hussein on “Hip Hop Circus.” And the only track with a somewhat tangible Aspects verse is “Succeed.” That’s simply not enough.