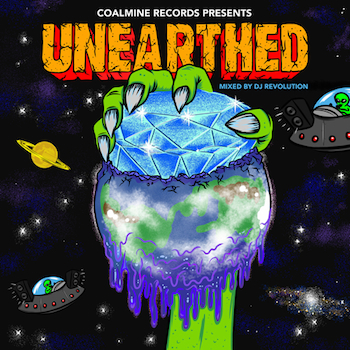 “Unearthed” implies gems that have previously gone unseen by human eyes, but in this case it’s just a clever pun for Coalmine Records on their 10th anniversary – or is it? The songs on this compilation have been commercially available for the last year and change, but they’re given a new spin figuratively and literally by long time selector and mixtape impresario DJ Revolution. Giving him the chance to arrange and blend these singles does indeed expose them to new audiences for the first time – those who wouldn’t have bought them individually can now enjoy them for the first time in this celebratory CD.

For the purposes of this review our focus is on the digital edition that came out two weeks ago and is 22 tracks long. There’s also a double disc “Untagged Edition” with bonus tracks, and out this week is an “iTunes Deluxe Edition” that adds even more to the mix. Is it overkill for a label whose very name implies their underground rap status to release this many versions of one album? Perhaps. You don’t get to celebrate a 10th anniversary every day though so if you’re going to go hard that’s an ideal time to do it. One can say the same of the tracks selected by Revolution for this mix – there’s a lot of killer and not much filler.

The list of artists is likely to remind you of 1990’s era Soundbombing compilations and if you’re not familiar with them take my word for it that it’s high praise – or don’t and read a review of one for yourself. Pharoahe Monch is in fine form on “Get Down,” vowing to “Get my people up out of the hood like Cus D’Amato […] Just so there will never be another Amadou Diallo.” Songs rarely feature just one emcee though – the rough and rugged Rah Digga teams with Fashawn and Reks on the aptly named “Never Back Down.” Long time Stones Throw affiliated artists Wildchild and MED (Medaphoar) united on “Most Confident” (MED is no longer with Stones though). TheGuilty Simpson and Small Professor album is revisited several times with songs “On the Run” and “I’m the City,” the latter of which features guest appearances by Boldy James and Statik Selektah.

Even though the group songs like “Land of the Crooks” featuring Sean Price, Billy Danze & Maffew Ragazino are the bomb, I really dig the slow flow and gruff deep vocals of hip-hop icon Rockness Monstah on “Drop ‘Em” and no-nonsense vocals of perennial underground favoriteTorae on “Real Talk.” It all comes together seamlessly thanks to DJ Revolution’s skill, which means the only real reason a hip-hop head WOULDN’T want this album is if they are so slavishly devoted to Coalmine Records they already bought everything you can find on this mix. I suspect 90% of readers will have a few if not many gaps in their catalogue so this 10th anniversary mix would be a great way to fill those holes and enjoy a compilation that not only celebrates the label but the spirit of independent and uncompromising hip-hop music.