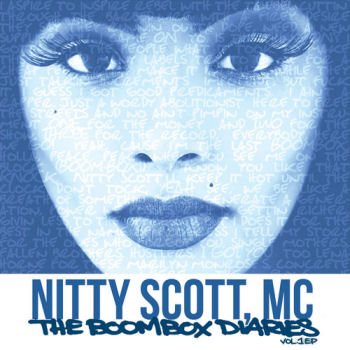 Hip hop can be frustrating. When you look at the most popular women in hip hop right now, names such as Iggy Azalea and Nicki Minaj are the key figures for young girls to look up to. Using their sexuality to their advantage, Nicki has taken the foundation for promiscuous rhymes and an ample set of melons from Foxy Brown and Lil Kim before her, and ran with it. The difference is, there was Missy Elliott and Rah Digga to counteract the sex with creativity and spitting ability. What I don’t understand is how Nitty Scott, MC has remained under the radar. She’s beautiful, perhaps the most visually attractive female to ever grasp the microphone. I’m sorry MC Lyte, Charli Baltimore and Angie Martinez – move over, but Nitty is (in the words of Birdman) a five star stunner. Now that I’ve got that out of my system, I can focus on Nitty’s skills, and they don’t disappoint.

I was put on to Nitty Scott, MC by Tanya Morgan after she popped up on their single “Never Too Much”, which had a video and made me realise that not only was Nitty a dope emcee, but prettier than any model you’d usually see in a rap video. That may sound superficial, but this fascinates me because usually a female that’s attractive will find it easier to blow up regardless of how talented they are. That’s how it works in pop music right? Well in hip hop it’s more of a case of looking sexually available at all times, and the latest South Park episode had a well-aimed dig at artists such as Nicki Minaj and Iggy Azalea for acting like nymphomaniacs. It’s not a new phenomenon, you could go all the way back to Salt-N-Pepa’s “Push It” for sexually suggestive rap, but the fact that the two biggest names in hip hop (that are female) are both known for their large, fake posteriors more than what they are talking about, is a problem for the Nitty Scotts and Rapsodys of this world.

Nitty has a markedly more feminine tone to her vocals. It’s fair to say that most females that emcee have a deep voice, but Nitty boasts a younger, sweeter delivery that is initially off-putting. Once your ears adapt, you realise that it’s because most female rappers sound authoritative or imposing and our ears have grown accustomed to what a lady should sound like, instead of what a lady can sound like. Come to think of it, many of the Foxy Browns and Lil Kims that utilise their female “qualities” actually sound masculine.

So we’ve established that Nitty Scott, MC actually sounds feminine, and isn’t capitalising on her looks – what does she offer hip hop? Her name alone summarises her no-nonsense persona: this is my name and this is what I do. Nitty’s very much the girl next door you can empathise with, sharing largely ordinary, yet honest tales of a struggle to be taken seriously. There’s is a tendency to rely on reminding the listener that this is “real hip hop”, which has lost all meaning in 2014. Just do you, and let the music do the talking. I get what Nitty is saying though, as songs like “Is This Thing On?” and “Your My Favorite” have a throwback quality to them. This style suits Nitty, as “Illuminitty”‘s thumping beat drowns out her vocals, but it’s clear that “Boombox Diaries Vol. 1” is merely a collection of tracks that Nitty has worked on. This is highlighted when hearing Action Bronson’s abrasive delivery on “Auntie Maria’s Crib”, a curveball that feels like Nitty jumped on a Bronson track rather than the other way around.

If you find Remy Ma’s high-pitched tones irritating, Nitty Scott, MC is a refreshing alternative. She claims on “Dear Diary” that she isn’t a conscious rapper, but she kind of is. The production never really hits any kind of stride and Nitty’s best work has been when working with others – J57’s “Like a Prayer”, Tanya Morgan’s “Never Too Much” and “Black Swan” with Rapsody. With the right production behind her, Nitty Scott, MC has the ability to do what Rapsody did this year, and release a great record with a focussed direction – which judging by 2014’s spiritual “The Art of Chill”, shows she is finding her lane.

Stay tuned for more from Nitty.