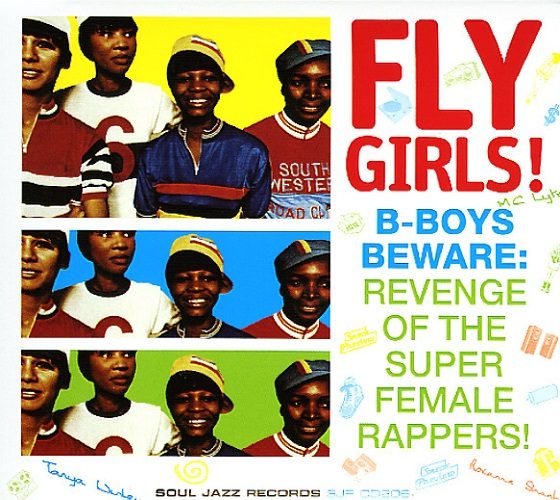 Here’s how another journalist (who happens to publish in a hometown newspaper) defined the term ‘fly girl’ – as recently as 2009:

[Translated:] ‘A fly girl is commonly understood to be one of those dancing girls who, mostly skimpily dressed, contribute to the sexually charged atmosphere of hip-hop videos.’ Nothing, of course, could be further from the truth. (UrbanDictionary.com, don’t even try to open your dirty mouth.) A fly girl, as everybody should know, is an active participant in the hip-hop arts and scenes. Yes, girls gravitate towards dancing more than deejaying, rapping and writing graffiti, and the above misinformation was part of a review of a certainly worthwhile dance project by choreographer Marie-Caroline Hominal called Fly Girl, but, when we’re talking hip-hop, being a fly girl is exactly NOT about surrendering to stereotypes (especially not the sexist type). In other words, girls can rap, too. They’ve done so virtually since the beginning of rap.

I’m in the middle of reading the first volume of Ed Piskor’s ‘Hip-Hop Family Tree,’ an illustrated history of early hip-hop in comic book form, and there’s a good number of female faces in there. Lisa Lee, who used to roll with Bambaataa, Sha-Rock of course, rap’s first girl group The Sequence, label owner offspring Tanya and Paulette Winley, not to mention the first rap music mogul herself, Sylvia Robinson… All-female rap compilations actually date as far back as the late ’80s. In 2009, British label Soul Jazz Records made a commendable effort with the double-discer “Fly Girls! B-Boys Beware: Revenge of the Super Female Rappers!” Names and titles weren’t always spelled correctly, but otherwise it offered a worthwhile glimpse into the female lineage of the hip-hop family tree.

Intentionally or not, the compilation starts with a cat fight as J.J. Fad respond to Roxanne Shante’s “Wack Itt.” It is perhaps accurate to kick off this kind of retrospective with a song that highlights an Achilles’ heel of female rap – male writers and producers. Credited to Ice Cube and Dr. Dre, “Ya Goin’ Down” is a vitriolic answer to the “Supersonic” spoof from Marley Marl’s “In Control” album, Shante not only being confronted with her commercial failure (compared to J.J. Fad’s platinum success) but also depicted as the Juice Crew’s sex kitten. It’s strong stuff and certainly worthy of being unearthed in the realm of the rap battles of the ’80s.

Male influence aside, female rap always had a vicious streak, as predicted by young Tanya Winley’s “Vicious Rap.” Released in 1980, it was one of the first recorded rap tunes with a street – and a political – edge, the original Sweet Tee complaining about the economical situation (“Before you know it you can’t buy a menu / with a dollar, because the value is a penny”) and unwarranted arrests by the police, the latter, even as it turns out to be a standard emceeing metaphor (she’s accused of “first degree rhymes”), foreshadowing the profiling Ice Cube et al. would address so clearly less than ten years later. Ms. Winley jams with and shouts out what seems to be an early incarnation of the Harlem Underground Band, but especially noteworthy are the sirens that open the track and reappear in the second half (later sampled by The 45 King and Diamond D). Still overlooked, “Vicious Rap” is a blueprint not just for female rap but rap in general. But since we focus on female rap, you can hear Paula Winley both in a maternal role when she warns you, “Listen good and listen well / cause I am not known for repeating myself,” as well as that of the daring, independent young woman when she describes her posse with “We’re like gangsters or the mafia / We won’t mess with you if you won’t mess with us.”

Sadly, Tanya Winley’s career didn’t last longer than a couple of singles. Years later another Sweet Tee would emerge, who as a protegee of producer Hurby Luv Bug stood in the shadow of the far more successful Salt-N-Pepa. “I Got Da Feelin'” isn’t her claim to hip-hop fame (that would be the essential “It’s My Beat”), but still a hard-kicking late ’80s dance track. The compilation isn’t always going for the obvious, see Bahamadia and The Roots’ 1996 remake of MC Lyte’s “Paper Thin,” an odd choice given Bahamadia’s catalogue, but nonetheless a welcome gesture of appreciation for the female contributions to rap. Lyte herself was for a long time the most acknowledged female MC within the artform, and “Cha Cha Cha” is an appropriate choice. Boasting, “I’m the dopest female that you’ve heard thus far – and I do get better,” Lyte, with her entire demeanor and vocal precision, was perhaps the first one who brought that specific emceeing dimension to female rap.

One prejudice the compilation cannot completely disprove is that female rap, often for lack of skill, can wind up a gimmick. Although, Philadelphia’s Lady B certainly wasn’t the only amateur rapper cutting a record in 1979, and her historic “To the Beat Y’all” is honest about her radio background. Also, the DJ testament she gives during the song is proof that from the very start the ladies were just as crazy about this thing that would go on to be called hip-hop as the fellas:

“I’m sayin’ when I die, bury me deep
Plant two turntables at my feet
Put my mixer beneath my head
So when they close the casket I can rock the dead”

But the ’80s weren’t exclusively populated by true-blue b-girls. There were, bluntly put, industry experiments, starting with The Sequence, who initially pursued a singing career. Others probably just happened upon a rap career – or at least humble beginnings thereof. Two Sisters were actually a black-and-white duo (whose attempts to break through were limited to the year 1983), assigned to dispel male prejudices (voiced by MC G.L.O.B.E.) and doing so in a rather stilted way on the electro-heavy “B-Boys Beware.” Also from the Bambaataa entourage, singer (and later wife of Arthur Baker) Tina B is the white face for “Jazzy Sensation (Manhattan Version),” a pop/proto-freestyle version of the original Jazzy Five song that could be found on the same 1981 maxi single. These random early white women in rap are definitely a contrast to the likes of Nikki Giovanni, Sarah Webster Fabio and Camille Yarbrough who are here presented as female rap’s foremothers and are all enlightened by black awareness in their ’70s recordings. Meanwhile The Sequence are drawn towards black pride and empowerment as seen through the Hollywood lens when they compare themselves to Blaxploitation heroines Cleopatra Jones and Foxy Brown on “Simon Says.” As is not unusual for early recorded rap, they interrupt the regularly scheduled boasts and brags to bring you a social message, and, as is to be expected, their message concerns fellow females:

“We’re not Jack or stupid Jill
Before we get pumped, we’ll take the pill
The fellas wanna make love every day
But when you get pumped they run away
You know it’s somethin’ that you did
But he said, ‘Huh, it’s not my kid’
You sit right there and you start to cry
And to your moms you lie, lie, lie
But before you know it the kid is born
The man you love, check it out, he’s gone
You sit there and you have to smile
You’re wonderin’ how you gon’ feed the child
But remember you’re young, gifted and black
and that your kid can never be the wack”

Dimples D is concerned about unplanned parenthood as well, but only after she advertises the deejaying skills of Marley Marl on their 1983 “Sucker M.C.’s” variation “Sucker D.J.’s (I Will Survive).” Her place would eventually be taken by Shante, who takes it up a level from dissing UTFO to taunting L.L. Cool J and Run-D.M.C. on “Bite This.”

Sparky D was one of her adversaries in the Roxanne Wars but was all out of ammunition by 1988 judging from “I Can’t Stop.” She wasn’t the only one who never got past her brief glory days, MC Lyte and Queen Latifah standing as beacons of light in terms of (relative) longevity and album-length achievements. “Ladies First,” the Queen’s visionary duet with her “European partner” Monie Love, is a mandatory inclusion and really the only emancipation proclamation female rap ever needed: “Some think that we can’t flow / Stereotypes, they got to go”…

With its focus on the ’80s and understandable consideration of British contributions (Cookie Crew and She Rockers), “Fly Girls!” has more than a few glaring omissions. Given the absences of Lil’ Kim, Lauryn Hill, Da Brat, Yo-Yo, Lady of Rage, Jean Grae, Trina, Eve, Foxy Brown, etc. it’s nice to see Missy Elliott among these Super Female Rappers. Not exactly debunking the myth that behind every successful woman in rap stands a man (or several), she still grew into one of the strongest characters in hip-hop and contemporary black music after the success of the Timbaland-produced “The Rain (Supa Dupa Fly).” There would have also been tons of regional candidates. 1989’s “Pump up the Funk” by Princess MC isn’t the most obvious choice but certainly proves the point that rapping females in Miami were concerned with mic-wrecking and crowd-rocking just as a certain 2 Live Crew was busy establishing industry stereotypes that objectified women in the worst way. A far cry from the strong and differentiated image these women projected of themselves, remarkably consistent by the way, from Tanya Winley’s “I’m hard as a rock and precious as a pearl” to Princess MC’s “The female MC, the microphone dealer / the sweet little princess and sucker killer.”

Celebrating the 30th anniversary of female rap on record, “Fly Girls!” is not the ultimate compendium on the subject, but it contains several certified classics and a number of historical tracks worth studying. If anybody wasn’t underestimating the capabilities of the female species, it were these women. As an exception, take it from a man for once, in this case the Boogie Boys’ Romeo J.D., a peer of many of these rappers: “Fly girl is a name that you must earn / Fly girls are girls who speak their mind.” And that is the correct definition of the term.