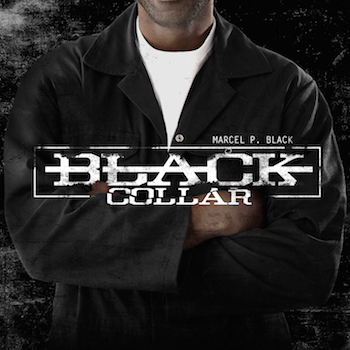 There are a lot of things that the “P” in Marcel P. Black can stand for, and judging by “Black Collar” I can say all of them are fitting: passionate, positive, productive, persistent, preacher, pro-black, potent and powerful. One bio describes Black as “gangster rapper meets baptist deacon” and I think that sums up his style nicely – but if it doesn’t then the song “Work” and the interlude before it certainly do. Black vows that you can be smarter, sexier or more talented than him – but you will never ever work harder than he does.

“I wake up early in the mornin while the rooster steady callin
Ain’t no time for sleepin late, gotta put some food up on these plates
For my babies and my wife, gotta get my people straight…
And there’s guap to be got, so I gotta get it poppin
So I gotta stay sharp, never ever am I sloppy
When I’m out’chea on the block, tryin to take it to the top”

The crunked out J Filly track sounds more like something that Three 6 Mafia would throw down over than a self-admitted man of God, but the ferocity with which Black attacks the track makes it a fit even if there’s a black collar around his neck. You won’t mistake him for a Biblical rapper though – the album is explicit and so is Black, though not in an over-the-top way that makes for a torrent of bleeps if you tried to air this on commercial radio. He mostly uses his language to make points about the male role model he aspires to be: “I don’t want it if I gotta call my sisters bitches/and you can keep it if it means I gotta squeeze the triggers.”

Positive rappers also occasionally suffer from sounding out of touch with the current generation, but “this nigga from Oklahoma” goes on a “Facebook Rant” that sounds like something I would find on my timeline on a daily basis. Black defines himself as “hip-hop you don’t stop/real nigga boom bap, the opposite of coon rap” and blasts “niggaz actin like I tried to sell out” on his wall. If you bring that drama to him while he’s trying to write “the soundtrack to the revolution” he vows that you won’t just get unfriended online – you’ll wear his size 13’s.

Pro Prospek provides the beat on this one, but Black works with a variety of producers throughout the 45 minutes of “Black Collar.” The well named Klassick Beats provides a soulful medley of horn and drums on “Phylicia Grier,” the Wu-inspired CZA proves that even the positive black can be a “Bad Man,” and Joe On Tha Track busts out the rock and roll guitar licks for “Another Way to Pray.” No matter who Black raps with he brings a high degree of intensity to the instrumental with his delivery. He gets so amped up that you’re actually glad he’s a man of God – you’d probably not want want him in your lane if you were a trap rapper.

Marcel P. Black didn’t overstate his case when he e-mailed us about “Black Collar.” He noted the album had no big guest features, only a few recognized names for producers, and that his work was simply “a reflection of the everyday person working to take care of his/her family.” I’m so used to press releases bragging about how hot someone is or the credentials they’ve got (and often annoyingly IN ALL CAPS) that his humility did more to catch my attention than a lot of rah rah shouting would have. I’m glad he did because even though “Black Collar” came out in late 2014 it’s my first favorite album of 2015. Years ago KRS-One famously opined that if negativity comes with a .22, positivity comes with a .45 – and that’s how Marcel P. Black raps. He’s positive but he’s not SOFT.