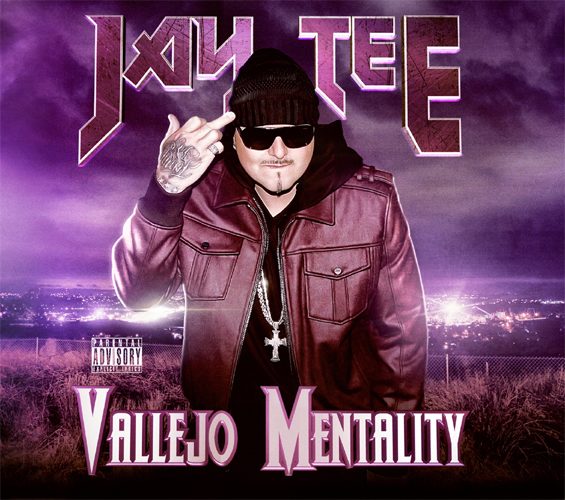 Back in the day (like really back in the day, by internet standards) Jay Tee was one of the first established rappers with a solid online presence. His website was n2deep.com, named after his first project that was signed to Profile Records. One entry on the site was captioned ‘Vallejo Ain’t On The Map?’ – presumably to answer assumptions that, rap-wise, Vallejo wasn’t on the map. The page listed every single V-Town rap release (LP’s and EP’s) up until 2001 – close to 80. Individually E-40 and Mac Dre had the most (they’d likely still occupy the top slots today), but Jay Tee himself had been just as active with N2Deep and Latino Velvet. At the time he was on the verge of a solo career, which today is itself numerous albums deep.

His latest is called “Vallejo Mentality,” and the fact that James Trujillo, as a budding independent entreprenuer, saw the possibilites of presenting himself and his work online 15 years ago (when most major labels failed miserably) can readily be attributed to an attitude that can be summed up as the Vallejo mentality. Vallejo rappers have DIY in their DNA. What this means, among other things, is they were able to find an audience on their own. They didn’t need someone to hold their hand, and the fact that you’re not part of their audience may simply be due to the fact that you had no promotion machinery telling you to. For outsiders it’s not always clear how this works, the local markets, the stylistic niches, the cult followings (without the constant confirmation of nationwide popularity), but if you’re looking for longevity in rap, you’ll likely find it under these circumstances.

It follows from the above that there’s a point where longevity creates a legacy of its own, where the evident hustle, no matter how local, makes such a strong statement that it can overrule criticism. These things alone speak volumes, the rapper can practically skip the details. That’s what Jay Tee does on the opening title track of “Vallejo Mentality.” He manages to record a song that says very little about that mentality but still embodies it. A neutral way to describe the lyrical content would be to call it old school Latino gangster rap: “I’m from Vallejo where the players dwell / The game is cold but these streets is hell,” etc. Jay Tee is not in the same league as Mac Dre and E-40, not by a long shot. But it’s very clear that they share the same stomping ground.

If he’s evidently had less of an impact in his career, it’s because his approach is more pedestrian, more mundane. Take this album. He prides himself several times in having women pay for his expenses. “I Don’t Know No Algebra” is basically a sequel to the very similarly themed “Chop That Hoe.” Using a Mac Dre quote from that same song for the hook (nicely cut up by The Insane Mixaken) only underscores the difference between Mac Dre and most of his peers. “It’s Not What You Say… It’s How You Say It” the latter once called an album of his, and “I Don’t Know No Algebra” makes it all too plain that Mac Dre possessed a very special gift of gab, as even the comparably well-spoken Baby Bash simply drops misogynistic nonsense.

When dealing with rap like that you have to know that ‘realness’ in West Coast rap rhetoric is traditionally linked to the abilility to make money. But even those who accept that fact have to admit that on releases like “Vallejo Mentality” the hustler mindset takes on an absurd note – and not necessarily the good, Mac Dre kind of absurd. In another world (the real world, perhaps?) Jay Tee would be called a freeloader or a cheapskate for his conduct on songs like “I Don’t Know No Algebra” and “Fifty One Fifty.” But apparently you’re only really ballin’ if you don’t pay for your shit. Oh he opens his wallet in “Fucked up Tonight,” but the immature sentiments still prevail. “They gon’ have to throw us out”? I figured ballers exit early for private afterparties while the bums are the ones that get unceremoniously ushered out. Or maybe I just don’t get the other damn level of the game.

Perhaps it should be esteemed that Jay Tee is not solely interested in boosting a reputation or building a myth. Like E-40 does with his current music, he observes the needs of both the casual listener and the Bay Area rap regular. “Two of You” sees him and fellow V-Town vets Celly Cel and Ironic make tongue-in-cheek arguments for a menage a trois. The sultry vocals of T. Mills and lean beat from Lil Bonez are further arguments that the track is in no way inferior to mainstream rap of today. “Way Too Wrong” takes us to the dark side of modern soundscaping with a creepy, trappish beat from Mystic Styles Productions. Jay Tee has the lyrics to match as he makes no attempt to sugarcoat his pimp game. “I Don’t Know No Algebra” is countered by “She Get’s Paid Fo’ It,” a strip club joint that for once shows some decency and tells the stripper’s side of the story by recognizing her game.

As many times before, Jay Tee makes perhaps not the most but quite a lot out of his modest means. Overall “Vallejo Mentality” is a nice mixture of contemporary club material and more vintage Bay slaps. Any type of song inevitably ends up a clichÃ© if you’re so reliant on formulas as Jay Tee is. But the songs themselves succeed at what they set out to do. While in theory Jay Tee is a clinical persona with no room for feelings or humor, the album is still not totally devoid of emotions. “Big Thangs” features Lofty, a later member of N2Deep, who died in a motorcycle accident. Without a trace of sentimentality, it’s simply a celebration of Bay Area car culture. “You Ain’t Stoppin’ Me” is emotional in a modern way, particularly thanks to Mystic Styles Productions and prominent Auto-Tuned, but not soul-destroying, singing. The second verse of the title track features a few personal moments, the rapper underlining the ‘Always been a hustler, always will be a hustler’ state of mind by tracing his career from high school junior to family man and pleading family obligations: “I’m dealin’ with these cats that’ll kill ya / Riskin’ my life just to feed mi familia.” He – albeit briefly – brings up things people can relate to, such as child support payments and job seeking in “Uno Cero Cero.”

But the song of atonement comes at the very end. “The Struggle Is Real” is different from the rest of the tracks, Lil Bonez subtly arranging guitar licks, piano drops and sung vocals as the rapper reflects on the daily grind in a surprisingly unagitated tone. Jay Tee ticks a number of boxes on “Vallejo Mentality.” He’s not the kind of complete artist that would rise above his environment, though. Recalling another Mac Dre album title – “Heart of a Gangsta – Mind of a Hustler – Tongue of a Pimp” -, on his latest Jay Tee only presents some facets of that Vallejo mentality. But having played a crucial part in putting his city on the map in the early ’90s, he certainly represents it to the fullest.