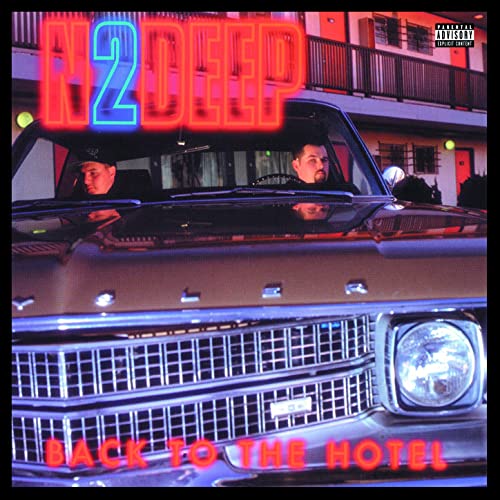 Back to the Hotel

N2Deep :: Back to the Hotel

Truth: “Flash makes incredibly bad jokes that no one else would get.” Example: Every time I go on a trip with my wife and we have to go crash at the end of the night, I look at her with a smile and say “80 West! Back to the hotel.” Then I hum a few bars of N2Deep’s one and only hit.

There was no choice for Vallejo rappers Jay Tee and TL to name their debut album “Back to the Hotel” after this song blew up. The only problem was they weren’t even the only rap group to sample “Darkest Light” by The Lafayette Afro Rock Band that year, and if you hummed a few bars of this song to anyone they might think it was “Rump Shaker” by Wreckx-N-Effect instead. N2Deep’s song was a modest hit, but take it from someone who was a teen back in 1992 (another reason to not be me — I’m that old) that “Rump Shaker” was EVERYWHERE.

In fact even though the songs are structured completely differently, with “Back to the Hotel” featuring much more sophisticated sample layering and a persistent percussive sound like a beeper going off, it’s likely people thought the V-Town rappers were ripping off Teddy Riley’s smash hit. Never mind that Public Enemy used the exact same sample for the interlude “Show ‘Em Whatcha Got” four years earlier. Were both Teddy Riley and N2Deep producer Johnny Z ripping off the Bomb Squad? You might as well not go there because then you have to bring up Jay-Z’s song too.

It’s just a popular sample and with good reason. What happened to the rest of “Back to the Hotel” though? Well there were three singles in total off the album, but you probably don’t remember “Toss Up” or “The Weekend.” I only just barely remember the latter, and it’s “Back to the Hotel” sans the hotel. It’s a song about “doing thangs that we really shouldn’t even do” while “smokin the whole fuckin street” with “the beat up so alla y’all can hear us” as they cruise, booze, and search for girls to roll with the crew. If they were from Long Beach instead of Vallejo the song would be called “Let Me Ride.”

They aren’t though, and they’re very proud to represent “V-Town,” so proud that E-40 and his cousin B-Legit both represent for their city on the track.

Unfortunately N2Deep’s profile as a group slowly slid backward from their debut, as it was virtually impossible for them to capture the lightning in a bottle of “Back to the Hotel” twice. Jay Tee would ultimately embark on a solo career, reuniting with TL for one more album in 2008, but so far as I can tell that was only a good excuse for them to tour again to promote it knowing people would pay just to hear them perform their signature hit. It sucks to be a one hit wonder right? Not necessarily. It may make you seem like a joke to some people, but having “one hit” is better than NONE, especially if you can bank off it for the rest of your life. They certainly aren’t banking off tracks like “Shakedown” or the misogynistic “Mack Daddyz.”

The production throughout the album is solid, so that’s word to Johnny Z, but the raps are only slightly better than mediocre and filled with the kind of cliches about being muy macho that don’t inspire anything more than grabbing your nut sack and spitting on the concrete. Life’s hard, N2Deep is hard, but after all that hardness, what’s left? It would be unfair if I didn’t note they were doing the exact same thing as a hundred other rap groups in 1992, but that’s also the reason why “Back to the Hotel” has one memorable song and a whole lot of filler. At least it’s pleasant filler to listen to.

N2Deep :: Back to the Hotel
6Overall Score
Music7
Lyrics5