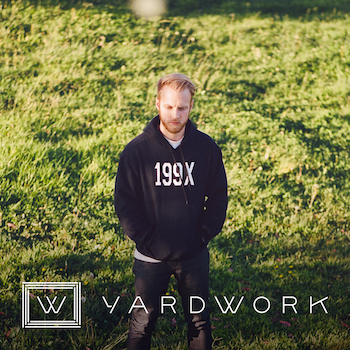 January is a downer of a month. It’s easy to forget that Christmas was originally a celebration of the Winter solstice. The cheer of the holiday season is always marked by the beginning of winter. It’s fitting then that Nick Weaver’s “Yardwork” is released at the beginning of January. It is a subdued and melancholy EP that fits well with the post-holiday blues.

Weaver is from Seattle, but spent some time in L.A. working and trying to make it as a rapper. That experience is detailed in “Triple 6,” as in the number of the beast for those of you familiar with Revelations. That should give you some idea of what Weaver thought of the music industry. His flow balances the rapid-fire intensity of mid-period Eminem with the heart-on-the-sleeve sincerity of Macklemore. he makes a type of hip-hop that you could call Sad Bastard Rap, in that it is mostly about the shit jobs he works, his women troubles, and and his struggles to make it as a rapper. “Yardwork” is full of the quiet desperation of an office drone working a soulless cubicle job, watching your dreams drift away and never managing to be more than one paycheck away from disaster. As he says on “Bang Bang,”

The production, which was done by Weaver and L.A. producer Hilsyde, matches the subdued mood of the lyrics. There are snapping drums combined with acoustic guitars and other analog instruments. It gives the album a warmth that adds to the confessional lyrics.

I wasn’t totally interested in hearing about Nick’s struggles with labels (“Triple 6”), his shitty cubicle jobs (“Yardwork,” “Bang Bang”), or his woman problems. What sold me on him as an artist are the songs where he talks about trying to hang on to his dreams and his family. The album ends with “You’re Crazy,” a tribute to his dad and brother in which he raps about his father’s battles with cancer.

“Three types of cancer and you still can’t be killed
Your smile is bulletproof
Your heart is about as full of truth as anyone I seen in this life
And now I’m pulling through
Down at the hospital
Sitting on the bench
Chemo every week
Like ‘Shit, let’s do this bitch again
Let’s kill these motherfucking cells
Then go on vacation’
Cracking jokes with the nurses while the medication’s waiting”

Love and compassion aren’t emotions that sell a lot of hip-hop albums, but Weaver manages to translate them into a rap song and make it seem natural. It’s tracks like “You’re Crazy” that make Nick Weaver worth checking out.