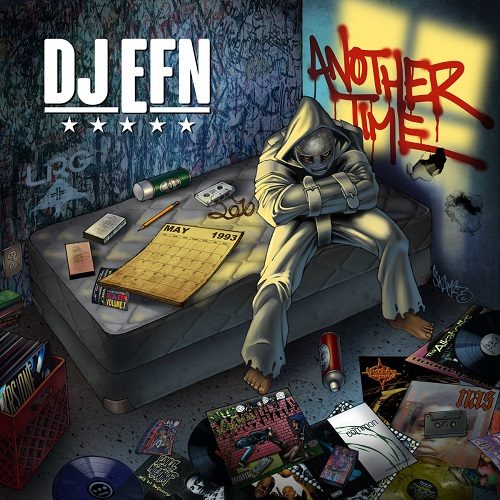 DJ EFN’s debut LP “Another Time” is a Chinese buffet: a well-produced slice of everything, grouped in common themes, and in quantities copious enough to leave you groaning at the end. From ghetto party trap music to hard-core hood rap, DJ EFN crosses and blends lanes of mainstream, underground, different generations, and different coasts, to produce a sampler platter that summarizes the last 20 years in Hip Hop.

The title track starts off with a disjointed mishmash of gospel chords and boom-bap beats, giving a retro kickback to the Wu-Tang era of deeply connotative bravado. As the name implies, Inspectah Deck notes that this is rap “from another time.” “Selfish,” featuring King Tee, Fashawn, and Kurupt, continues the old-school East-coast vibe, which transitions to Dirty (with two R’s, mind you) South trap music in “Lane 2 Lane.”

The party sours into a shootout in the gangster’s life with “South-West,” feauring MC Eiht, Blu, and Kam. The beats and the subjects get harder, and “Crazy Dope” with Milk Dee, Sean Price, and Murda Mook almost recalls an 80’s-like chorus. The chorus cadence is very “a Hip, hop, to a hippity hop,” delivered over stripped-down chimes and low horn blares. Mook murders with his battle-rap finesse, “True fact, you ain’t worth me lettin’ these tools clap/if you reach, I’ll give you the beats, boom-bap.”

But Hip-Hop was made in part for escape from the streets. In true low-riders style, a Spanish horn riff opens up for “Revolutionary Ride Music,” which critiques the under-developed mentality of your average gangster rapper. This message is transposed for the masses in a musical mixture of “ignorance and intelligence.” (Or as Killer Mike would say, “ratchetness and righteousness.”) The following interlude, narrated by Umar Bin Hassan, marks the transition from consecrating the criminal life into social messages. In “Who’s Crazy,” featuring Troy Ave, Scarface, Stalley, and DJ Premier (Produced by DJ Premier), Scarface, over skillful record scratches, captures the attitude towards police brutality with “It’s evident that the evidence/that was captured on the camera is irrelevant/get the dogs get the tanks out/fuck a nigga blow his goddamn brains out/same shit different city.” This sets the tone for the next couple songs, which all spit different game to the same shawty. In “Survival,” Trick Daddy is as existential as he can get, and Dead Prez makes clear the mentality regarding current police violence, saying that “They Oscar Grant, they Mike Brown, they modern-day lynching.”

A fight for black pride ensues, with a healthy dose of motivational rhyming over a more pop sound. David Banner, in “Warrior,” discusses the Clippers, “Sterling basically called us niggas/called us slaves in some Js/shootin’ Js we got paid to look weak/they offered him two bill in two weeks/that’s microsoft pimpin,” over brass flares and heavy bass beats. “Role Model,” featuring Bun B, Jarren Benton, Eric Biddines and Amber Monique, then tries to uplift the black youth that had been established as societally and structurally targeted in previous tracks.

This feel-good flow is continued with the jazzier, chill vibes of “Paradise,” featuring Talib Kweli, and reps the West Coast with “Motivation,” featuring Defari, Cormega and Boaz. “G Shit,” featuring McGruff, Prez P and Grafh, shouts out to the groovy comedic swagger of a younger generation of rappers. Grafh pops jokes like, “Yo girl ass shots look like a dirty diaper,” as they chill with some blunts and stacks. Miami gets some hardcore repping in “#HomeTeam,” featuring Garcia, Dynas, Skam2?, Heckler, Society, and Mother Superia, where artists from “the bottom of the map” dispatch personal narratives from the hood.

The album finishes strong with “We Earned It,” featuring Ras Kass, Black Milk, Black Collar, and Cory Gunz. The chorus to the song summarizes the chaotically youthful energy of underground rap perfectly: “Everything we got in this world, nigga we earned it/never follow your rules took a lighter and burned it/Underground, nah, we right here on the surface/our rap sheet is perfect, we rap for a purpose” (Black Milk). Those lines could’ve come out of a Beats poet; in fact, I’m fairly certain that Allen Ginsberg, as played by Daniel Radcliffe, said something to that effect. By choosing this for the closer, DJ EFN not only marks the progression of hip-hop, but also honors the OGs and lauds the future.

Much of the album is basic AB synth chords and piano progressions twisted over 808s or trap snares, putting the emphasis on the lyricism and flow of each artist. As a DJ, EFN is able to break a lot of the barriers of geography, generations, and fame, bringing reps for each coast and style. Even the more unusual combinations of features, like Trick Daddy and Dead Prez, in “Survival,” mix well together like avocado on sushi. The organization flows seamlessly, starting from a back-to-the-roots original NYC track with Inspectah Deck to gritty trap music. It then throws heavy jabs with hardcore gangster rhymes, and traverses into “fuck the police,” gangster sentiment before heading to a more positive note. The collection closes with songs that represent what the work itself is meant to be- a celebration of this flawed, beautiful culture.