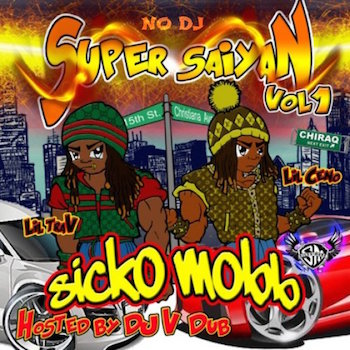 Bop emerged in Chicago in 2013 as a more upbeat, dancy foil to drill music. Where drill is dour and detached, bop is bouncy and melodic. Where drill is centered on reflecting/celebrating Chicago’s gang culture, bop is centered around the dance style that gives it its name. Sicko Mobb were one of the breakout successes of the bop explosion of 2013. While they’ve been languishing in label hell (more on that later) and so may or may not release new music this year, their 2014 mixtape “Super Saiyan Vol. 1” is worth revisiting.

I don’t like drill music and I don’t understand the appeal of artists likeChief Keef and King Louie. I respect that drill is music that is from the streets and for the streets, but the nihilism and aloofness of drill rappers doesn’t do anything for me. Even though it is similar to drill, bop makes a lot more sense to me. Bop keeps the basic elements of drill (Auto-tuned rapping, simple lyrics, electronic beats) and adds energy and enthusiasm. There’s echoes of house, juke, footwork, and even trance and J-pop in bop, but all filtered through a street rap lens.

Sicko Mobb’s single “Fiesta” kicks off the mixtape, and it is the best song on the tape. Lil Trav and Lil Ceno rap over a simple melody, their voices heavily distorted with Auto-tune. As the title suggests, the song is about partying. It’s an infectious song that is deceptively upbeat. Even when Trav and Ceno are rapping about popping molly with bad bitches, they remind the listener that they are all packing and their “bullets are so vicious.”

Sicko Mobb signed a deal with Swedish producers Stargate, who’ve made hits for Beyonce and Rihanna, among others. It might seem odd that a Chicago street rap duo get a deal with pop producers, but Sicko Mobb’s sound has definite pop leanings. A lot of these tracks could be pop songs if they had a different singer and different subject matter. They are full of cheesy synths and video game bleeps and blurps. Only instead of Katy Perry or Selena Gomez singing about love or whatever, it is two kids from one of the worst neighborhoods in the U.S. sing-rapping about getting wasted and driving fast cars. It’s like anime meets Disney meets Euro techno meets straight-up gangsta shit. In other words, kind of exhilarating, kind of exhausting, and really disorienting.

I can understand why record execs might have thought that there was commercial potential in Sicko Mobb’s sound, but it is hard to say where they are headed. The CEO of Sicko Mobb’s label, Polo Grounds, is in jail on weapons charges and Sicko Mobb have mostly laid low for the past six months. Combining street rap and pop-dance music is a tricky prospect, especially if you want it to have mass appeal. It seems like there is a high possibility of the finished product either being too street for the mainstream, or veer too mainstream and end up losing what makes this music interesting to begin with.

Bop may not be the second coming of Chicago hip-hop, but it is interesting on a couple levels. For one thing, it meshes European and Asian and American music in a way that I hadn’t heard before. It is also aligned with the melodic street rap that California has been churning out for a few years –DJ Mustard, YG, TeeFlii, et cetera. It is rap that is miles away from the boom-bap and mean mugging that used to personify what hip-hop was supposed to be. There is a generation of kids for whom Lil Wayne is old school and who grew up much less musically segregated than their predecessors.

Artists like Sicko Mobb don’t abide by the same musical boundaries that constrained rappers in the 90s or early 2000s. A lot of older hip-hop fans lament about the kids these days and how their music doesn’t sound like the stuff BDP or Public Enemy or Tribe Called Quest made. “Super Saiyan Vol. 1” may not replace my copy of “Fear of a Black Planet,” but so long as the younger generation is making music that is as adventurous as Sicko Mobb, hip-hop is going to be just fine.