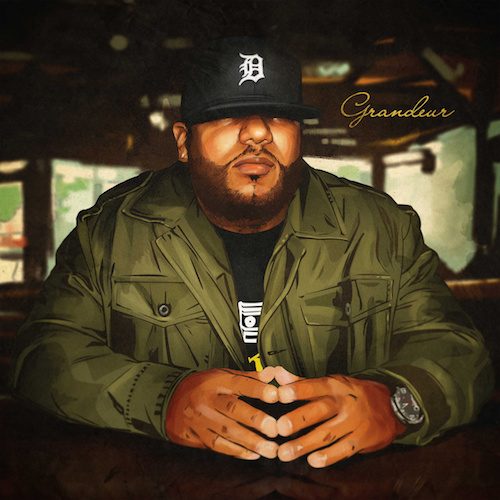 If you’re unaware of Apollo’s swinging soul-sampling style of production, then you must have been living in a cave for the past five years. He’s taken the world by storm, becoming the underground’s version of DJ Mustard. If you’ve got an Apollo Brown beat on your album these days, you’ve done well. If you have been following Apollo for a while now, you’ll also have been living in a cave – one made from the hundreds of CDs/LPs he’s released. That’s an exaggeration of course, but “Grandeur” is his thirteenth record since 2009’s “The Reset”. Thankfully, every single one of them has been excellent (although I found Hassaan Mackey’s “Daily Bread” to be underwhelming), which is why Mello Music Group have got him working his dusty fingers to the bone.

So is “Grandeur” another thumping LP? Of course it is. Designed to be Apollo’s biggest, most epic recording, at 19 tracks it’s inevitably not without its faults. Vinnie Paz over an Apollo Brown beat should be the stuff of rap fan’s wet dreams, but it’s further proof that you can’t just stick a dope emcee on a dope instrumental. The varying styles just don’t sit well. Even the M.O.P. single is an example of this, despite being great to punch walls to. The production takes too much focus away from Fame and Danze’s style. Probably the biggest let down is “Yesman Shit” which fails to do justice to Sean Price’s legacy:

After eMC’s weak “The Tonite Show”, it’s good to hear Masta Ace and Wordsworth over some GOOD soundscapes, and “Money” is predictably solid. Wordsworth often utilizes the bouncier beats and his hyper-lyrical storytelling is another promising combination that could end up being realised in years to come. The short and sweet collaborative album with Rapper Big Pooh “Words Paint Pictures” is one of my favourite LPs of 2015, and once again Apollo laces Pooh with the snappy “Gettin’ By” proving that when you combine Brown and Pooh, it’s definitely the shit! (Sorry). Ras Kass gets in on the reunions, as do OC and Ugly Heroes. Red Pill and Verbal Kent fare best, and they prove that their chemistry is the perfect foil for Apollo’s more plodding productions. Evidence rarely disappoints, and “There’s Always Radio” hints at what could be a lethal pairing in the future. He absolutely murders the start of that first verse:

Apollo Brown records are now expected to be sitting in critic’s Top 10 lists at the end of the year, and he’s set a high standard for himself which is going to be difficult to maintain, especially with an average of more than two projects dropping each year. At this point, Apollo Brown’s sound hasn’t necessarily got stale, but it’s become a little formulaic. As great as he is, “Grandeur” feels like the result of being spoilt by too much of a good thing. It remains a rewarding listen, but compared to highlights such as “Trophies”, “Gas Mask” and “Ugly Heroes LP”, it’s a little disappointing.