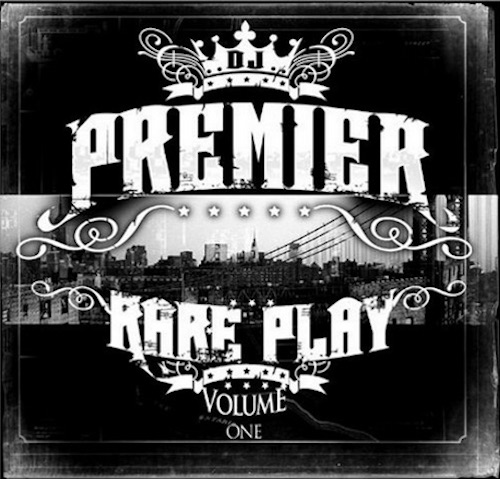 DJ Premier needs no introduction, but let’s try and do a quick one. Numerous classic albums alongside Guru as Gang Starr, production credits on damn near every New York Hip Hop album throughout the 1990s and a distinct style that’s spawned hundreds of imitators across the world. He is constantly touring internationally, breaking young talent and hosting radio shows – he hasn’t slowed one bit as he approaches his 50s. It’s no surprise his vocal chords sound like they’ve been scratched more than his oldest turntable needles.

“Rare Play Volume One” is a mixtape (or mix CD at least) in the traditional sense with Premier mixing the tracks together to create one continuous set. Granted, Premier isn’t the greatest turntablist – most of the mixing involves bringing the first few bars of the track back, repeatedly, almost to the point that it becomes annoying. Fortunately, this is a collection of some of the more obscure productions that Premier has made, mostly from the early 2000s when Premier’s style was sought after by more underground artists. He still landed productions on Snoop Dogg, Xzibit and Nas albums, but those were album tracks, not singles. Many of the songs presented here are singles, but ones that were overlooked.

Ras Kass’ “Goldyn Child” kicks off the record perfectly with one of Preem’s best beats. Yeah you read that right, “Goldyn Child” is brutal brilliance, expertly written by Ras Kass:

Lifted from the shelved “Van Gogh” album, it encapsulates the potency that can be brought out of an emcee as lyrical as Ras Kass. Premier rarely works with super-lyrical emcees, and rightfully so, but this is a lightning in a bottle moment. Given this is a traditional mix-CD (or mix-LP), I’ll treat each track as a continuation of the previous, as that’s how the compilation is often at its best. Handily, Premier is renowned for having the same drums for the past two decades, and it helps the transition in to Da Ranjahz’ horrifically titled “Insp-Her-ation”, featuring Cee-Lo Green. For some reason they are billed as Tha Ranjahz on the case. Despite being a nippy little track with swift scratching, Cee-Lo nails the hook in predictable fashion, to the point that he completely overshadows emcees Wais P and Dark Half.

Remember Teflon? That angry lad from M.O.P.’s “Ante Up Remix?” He’s been down with Premier since the 90s and “Comin’ At Ya” is a filthy track not dissimilar to any of Blaq Poet’s countless hardcore New York anthems. A B-side to the even more intense “F-U” (also produced by Premier), “Comin’ At Cha” is hard and definitely benefits from the faster BPM mix. Looking back, it shares a lot with Jadakiss’ “None of Y’all Betta” which was released two years later and caught a larger audience, but is a nice, energetic snippet of an emcee who was largely ignored by the mainstream. Just as Nick Javas has promptly fallen off the face of the earth, the quickly forgotten Sonja Blade was blessed with a couple of dope beats on “Look 4 The Name” which is tied together by some exquisite scratches. Premier remains excellent at introductory tracks, allowing emcees to lay down their character for the listener – recent examples of this can be found on Diabolic’s “Diabolical Sound” and King Magnetic’s “Status”.

AG’s “Weed Scented” is a little too minimal for my tastes, and you get the impression that if it was produced by anybody else, it would be a forgettable track. The only good thing about the track is it sets up M.O.P.’s “Bloody Murdah” perfectly thanks to some deft scratching and a superbly timed drop. Every rap fans’ favourite gun impersonators slay another minimal production most emcees would struggle with, and what was originally a forgotten 12″ from 2004 when M.O.P. were releasing music under the Marxmen banner. It does go a bit tits up halfway through as Premier chops the vinyl up excessively, as if he was playing around on his Sirius Satellite radio show. If things weren’t hard enough, Blaq Poet’s “We Gon’ Ill” follows, with an equally minimal instrumental that blossoms once them trademark scratches come in to effect.

One of the problems I have with Premier’s catalog of work is his tendency to offer quality production to emcees that don’t do it justice. All City’s “The Actual” is a classic example of this, with Pitch Black and even Group Home’s work also highlighting Chris Martin’s generous nature. Remember All City? They were J. Mega and Greg Valentine (not The Hammer, wrestling fans), a short-lived duo from Brooklyn. It’s worth noting that while they refer to themselves as All City Crew on this track, All City Crew are a different rap duo from Queens (consisting of Neta and Gee Dubbs). “The Actual” got some mild airplay back in 1998, and while it does suffer from atypical rhyming from the times (repetitive flow and talk of money and hoes), it remains a catchy track thanks to Premier’s plodding instrumental. Screwball fare better on “It’s All Real”, with each emcee blasting the ominous beat to bits through sheer energy alone. It’s no surprise Blaq Poet later went on to record “The Blaqprint” with Premier, as they both work well together.

The 90s were generally considered DJ Premier’s prime (or should that be PRhyme) and some of his lesser known work appears towards the end of “Rare Play”. Blahzay Blahzay’s “Danger”, Big Shug’s “The Jig Is Up” and Krumb Snatcha’s “Closer To God”, all New York underground classics in their own right, but none compare to the superb super group effort that is “Return to the Crooklyn Dodgers”. Unless you track down a copy of the soundtrack to the 1995 film “Clockers”, this is a great reason to pick up “Rare Play” on its own… Hell, Preem even made Charli Baltimore sound dope on “Everybody Wanna Know”.

If you can live with the excessive “P-P-P-P-P-P-Premier” sound effect that’s over the start of most tracks, you’re in for a rewarding selection of some of DJ Premier’s most overlooked 12″ singles. Well worth tracking down.