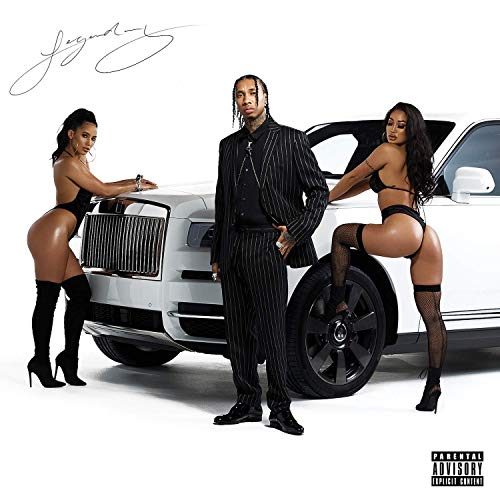 Because of the timing of his release I have the Lizzo line “twerk skills up on legendary” stuck in my head every time I look at Tyga’s “Legendary” album. It may be for that reason that I was expecting his collaboration with Gunna on the title track to be at least as epic as hers with Missy Elliott on “Tempo.” Unfortunately not only do the songs not compare in the slightest, “Legendary” may actually be one of the album’s MOST repugnant tracks. The obnoxious sing-sing flow of both artists makes them indistinguishable on the track and the instrumental is far from one of Murda Beatz’ best.

The biggest disappointment is that the track is a rather banal ode to a woman who apparently has REALLY GOOD power U. If Tyga were to actually rap about how he is legendary, he’d have a decent argument. In an genre that’s notoriously fickle with music buyers who are even more so, Tyga has reached the seventh studio album of his career with “Legendary” and had well over a dozen singles chart on Billboard. While some of his albums have been seriously disappointing, his survival in a cutthroat rap industry does qualify him as a legendary figure. Even his haters have to admit he has an uncanny knack for dropping hot ones for the club, and the single “Taste” featuring Offset (Migos) is no exception.

“Uh, chains on the neck for the whole team
And I feel like Gucci with the ice cream
And my b***h want the Fenty, not the Maybelline
I’m the black JB the way these b****es scream”

Are Tyga’s lyrics on the song relatively pointless? Sure — but the D.A. Doman beat is POPPIN’. The reason I get frustrated though is because I know Tyga is a thoughtful, intellectual dude who is capable of delivering conceptual albums that show his lyrical skill off. Ever since “Rack City” though he’s become content with phoning in songs that are about how much money he spends and all the curves of his latest girlfriend, in between odes to getting high or drunk (perhaps both). “Haute” featuring Chris Brown and J Balvin fits right into that pantheon.

“I know you wanna f**k a rapper, you a rap fan
How you just glowed up like Pac-Man
I get it, you got bands (yeah yeah)
Make your own money, make a nigga spend his whole advance
If I hit once, then I know I can hit it again
T-shirt and your panties on, baby, you know what it is”

Aside from the fact that anybody working with Chris Brown is always problematic given his domestic assault record, his history with Tyga suggests that he’ll almost always pop on a new album. It’s the sort of thing we just have to live with. Mediocre lyrics aside, it’s hard to not enjoy some of the tracks here. “Werkkkk” has a nice Dr. Luke and Mustard-on-the-Beat bop. Jermaine Dupri is a legend in his own right, and his collaboration with Extendo Beatz on “S**t I Like” is pretty tight.

Unfortunately it always comes back to Tyga just delivering songs that sound like “Rack City” sequels that he could probably write in his sleep. In fact I think he delivered “Too Many” while sleepwalking in and out of the studio. He doesn’t even sound like he’s trying. “Money, cash, hoes, I got too many my nigga”. Oh word Mr. Stevenson? You got it like that huh? Well good for you playa. This is your seventh album so I would hope you’d have all the fruits of that longevity available at your fingertips to consume when you’d like. If I’m being as fair as fair gets about it, Tyga is the embodiment of the phrase “work smarter, not harder.” Why should he work hard on critically acclaimed albums that sell poorly when he can just rap about p***y for 42 minutes over hot beats and go gold? That’s a smart dude. Unfortunately with such mediocre lyrics he doesn’t SOUND like a smart dude, but I sincerely doubt he cares and the clubs this is meant for won’t either.